We climb the myriad stairs of Monument-National, on Boulevard Saint Laurent only to seemingly descend into the orchestral pit below. However, that does not strike me half as strange as looking at the darkened stage and finding that the only musical instruments on stage are a nine-foot Steinway, a Nord keyboard, a contrabass and an electric bass and a drum set – hardly a complete compendium of instruments for a concert of Afro-Cuban-inflected music. I even remark to Danilo Navas – rather too loudly I might add – that a stage without a tumbadora (at least), bàtá and timbales can’t possibly give us a full experience of the ABUC we both experienced on record; that is to say relive its explosive music ‘in the flesh’, so to speak, with its musical anthropophagic creator, Roberto Fonseca. It turned out that I was dead wrong and that too, right from the get-go.

The stage was set, I knew, for one of a new generation of Cuban pianists – the generation after the iconic Chucho Valdés. Roberto Fonseca never thought of himself as the leader of this pride of young lions who settled as far removed as the United States of America and Canada to the north of the fabled ‘island’ is from Spain and Germany – to the east – in Europe; from where Jazz and the Contradanza were reflected into the Caribbean. But in many ways Fonseca is certainly the most distinctly ‘African-inflected’ of his generation, and so is the most dramatically ‘Cuban’, if such a style is at all possible. Should proof of this déclaration scandaleuse at all be necessary, one must only turn to the eleventh (and ultimate) track on ABUC, to the solo piano version of Ray Bryant’s iconic song, “Cubano Chant”: the song is front-end and rear-end and through-the-middle loaded with the most astonishing guajeos you will hear on record; complete with arpeggiated chords in syncopated patterns, a near-mystical experience for me.

Roberto Fonseca does not open with or, indeed, play that solo version of “Cubano Chant” anywhere through the concert. He does, however, open with a sextet version of the song – featuring five less accompanying musicians than the version on the record. Did we miss them? I think not. First of all I was wrong to fear the (absent) percussionist – in this case Inor Sotolongo – or the (absent) brood of brass and woodwinds players that included one of my favourite saxophonists, Javier Zalba Suarez: there was after all the trio of celebrated Quebecois musicians – baritone saxophonist Samuel Blais, tenor saxophonist Marie-Josée Frigon and trumpeter Rachel Therrien. And then there was the drummer Ramsés “Dynamite” Rodríguez Baralt, who appeared all by himself, without Yaroldy Abreu Robles (or Inor Sotolongo), and who even managed to pull out – as if by magic – a set of timbales seemingly tucked under his left armpit. Finally there was Yandy Martinez Rodríguez, who together with Ramsés “Dynamite” Rodríguez and Fonseca made up the fabled Terrifying Threesome not unlike Dannie Richmond and Jaki Byard were to Charles Mingus.

The brass and winds were showcased early – in the monstrously beautiful version of “Cubano Chant” a guaracha par excellence. Rachel Therrien was suitably showcased and proved to be just as spectacular in Roberto Fonseca’s ABUC sextet as she is when she is fronting her own bands. Her playing – voluminous as it is – seems to focus first and foremost on colour, nuance and expression rather than powerful tone for the sake of it. Samuel Blais, though playing a potentially bellowing baritone saxophone, is earthy and muscular, but his notes and phrases have a delicious, un-portentous lightness of touch. And it is left to tenor saxophonist Marie-Josée Frigon to play the sinewy almost intimidating (in the nicest possible way) role of the trio rightfully suggesting the intimations of grandeur in Roberto Fonseca’s music through explosive and somber as well as spiritual, sparkling cascades full of colour, poetry and exceptional touch, so much so that I have already forgotten what the record sounded like. Of course, it is Ramsés “Dynamite” Rodríguez Baralt and Yandy Martinez Rodríguez who are the glue that binds brass and winds to the piano of Roberto Fonseca. The two rhythmists are clearly fully alive to the rapid progression of Fonseca’s ideas, the playfulness and the moments of introversion as well as the passion. 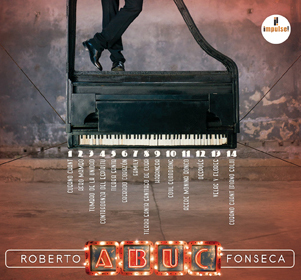 Nowhere was this clearer than on the one bolero – or at least what began with broad hints of “Contradanza Del Espíritu” and then turned into the bolero – “Bésame Mucho”. The music began with Yandy Martinez alone on a darkened stage, bow in hand, majestically caressing his contrabass as he worked those quieter, haunting, shadowy transitions, pianissimo on his bass. This magnificently coherent, nobly expressive, beautifully-toned, and above all refreshingly un-egoistic performance paved the way for an inimitable entrance and performance by Roberto Fonseca on “Bésame Mucho” which turned out to be a bolero to end all boleros. Of course you would expect nothing less from Roberto Fonseca. His was as ever, a performance mercurial and yet consistently intense, well-shaped and full of rhythmic muscle and drive. Fonseca’s soli were never gratuitously virtuosic; rather each was mellifluous, expressively generous, expansively stylish, and fiercely driven. Such a crisp, sharply-focused, high-energy performance, never short of thrilling, was served as a dish fit for the Orishas. Indeed Fonseca’s revisiting of the Cuba that courses like hot blood through his veins was something to die for – well worth the miles of staircases that I had to climb to get to it.

I almost didn’t log into Vimeo at 8 o’clock on Saturday night, March the 27th. It’s not that the programme...
Promotion