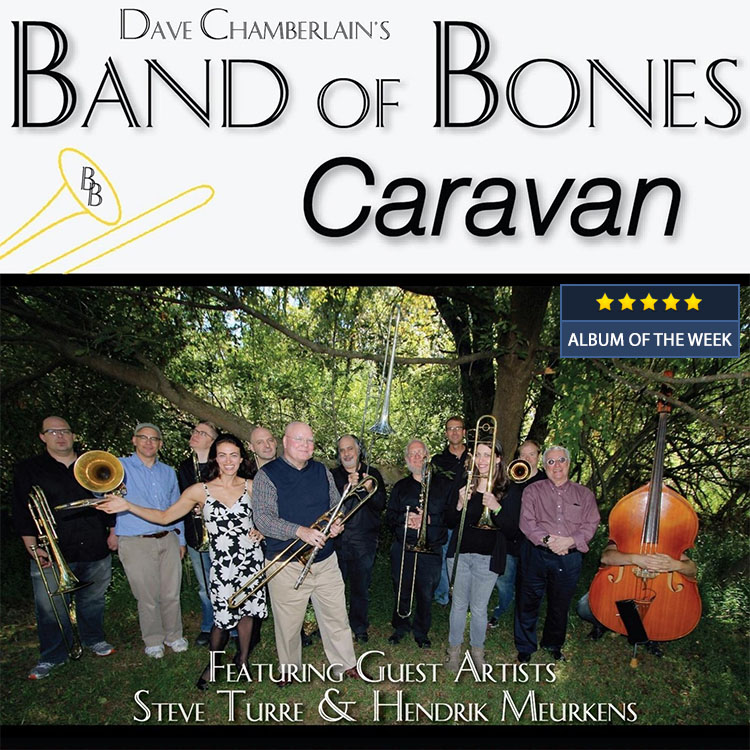 Trombone choirs are few and far between. Good trombone choirs even less so and great ones almost non-existent. Some of the finest choirs of this kind have been led by Steve Turre’s and there have been others in the Eastman school, Julliard and CSU… But now there comes another as if from left field and that is Dave Chamberlain’s Band of Bones, a fine ensemble of nine trombonists backed up by a trio and quartet depending on which chart is being played. Mr. Chamberlain’s music—compositions and arrangements of famous charts such as “Manteca” are truly inspired on this record. This has a direct impact on the nonet and the rest of the ensemble and no one seems to put the approximately 9 ft. of tubing to better use than the members of this Band of Bones, as the group is called. The reason is not the mere dexterity of the players or the technical wizardry, but the minute gestures and nuanced emotion that make of this performance something to admire immensely.

As trombones go, the question is not always how high, but how low can you go—bass trombone or not? To the director of this ensemble Dave Chamberlain, considering all he has set out to play this is perhaps the paramount question. Although the charts demand a good number of low Cs and B flats, this recording Caravan takes this a lot further with incredible results. This astonishing music—right from “Manteca,” “Slidin’,” “Lament” and “V.O.” as well as “Caravan”—makes for one of the truly memorable recordings of the year. The nine trombones produce a gloriously rounded tone which has great inner strength without becoming hard-edged or coarse. Moreover the sonic atmosphere in the studio produces terrific acoustics with mikes being placed at strategic distances from the musicians to capture the richly nuanced performance with crystalline diction and crisp, accented rhythms.

The soli are spectacular with the interpretation of lead trombones in each case also emotionally spacious and full of lovely movement. The upper voices of the other trombones undulate gently and with some gracious portamentos while the lower one of the bass by contrast is almost a rumbling grumble almost as if it were the sounding of deep tolling bells of the soul. This counterpoint is simply sublime. The bass trombone soloist, Max Seigel does an exquisite job as do the other soloists when called upon to move into the limelight. Master conguero Chembo Corniel makes a superb appearance on this terrific recording, adding the percussive touch to the band. The reason to buy this disc is also to encounter the contrabass notes of Jerry DeVore, who often ventures beyond composers’ scores to a staggering bottom A flat and Gs. Add to that the fact that the frontline of the trombones soar regularly in their soli and that makes this recording a top choice for 2014.

Dave Chamberlain must get a large part of the credit for his inspired partnerships with harmonica player, Hendrik Meurkens and trombonist and shell virtuoso, Steve Turre on “Slidin’” and “V.O.” respectively. While these performances add immensely to the value of the recording, though, it should not be construed that anything may be taken away from the nonet that Mr. Chamberlain leads. They are superb throughout.

About Band of Bones

Raised in Buffalo, Dave Chamberlain began playing trombone at the age of ten, inspired by watching his four cousins playing in a brass quartet on the Ed Sullivan Show. He began doubling on flute in high school, going on to earn a B.S. degree in flute, and later an M.S. in trombone. His primary teachers have been Anthony Gorruso, John Wummer, Carmine Caruso, John Swallow, and John Rojak. Since coming to New York, Dave has added the bass trombone, tuba, euphonium, and bass trumpet to his arsenal. Band of Bones is his fourth CD as a leader. Dave’s other projects are the Hora Decima Brass Ensemble (www.horadecima.com, Summit Records) and the Afro-Caribbean group Direct Latin Influence (www.directlatininfluence.com, two self-produced CDs)… Read more…