Minton’s Presents: Jazz At The Crossroads 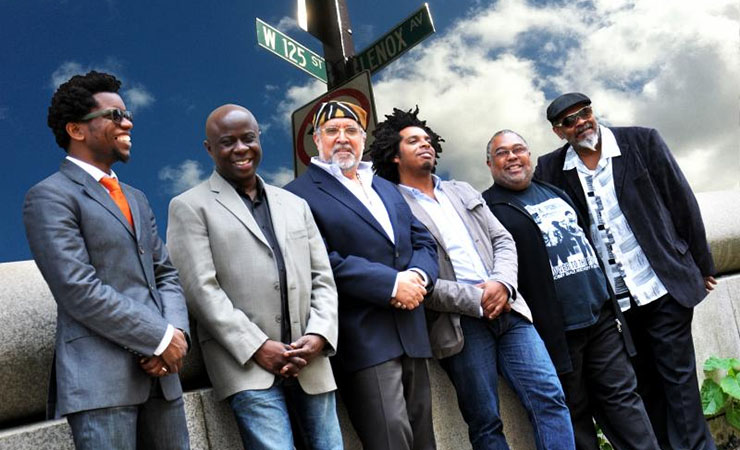 Jazz At The Crossroads “The Dance Of Eleggua”, a festival celebrating Harlem as the point of contact between roots music, the avant-garde, Latin and Afro-American jazz. Kicks off with Afro-Latino drummer Francisco Mora-Catlett & AfroHORN on Tuesday, May 13th 7 pm – 11 pm (Tuesdays, May 13th – August 26th)

Minton’s, the iconic Harlem jazz club where Bebop was born, kicks off its Tuesday night music festival JAZZ AT THE CROSSROADS: THE DANCE OF ELEGGUA, on May 13th with AfroHORN – the progressive jazz ensemble led by Afro-Latino drummer/composer Francisco Mora-Catlett.

“Led by the drummer and composer Francisco Mora-Catlett – the son of the Mexican painter Francisco Mora and the African-American sculptor Elizabeth Catlett – AfroHORN seeks a mystical but earthy vision of rhythm and folklore, inspired not only by Afro-Cuban music but also the Sun Ra Arkestra, in which Mr. Mora-Catlett played in the 1970s.” – The NY Times

Jazz at the Crossroads was inspired by the Yoruban deity Eleggua, the messenger of the gods – a trickster who is the guardian of all crossroads and doorways and rules the portal where past and future meet. A key figure in the cosmology of pan-African culture in the New World, he embodies the multiple doorways onto the African-Caribbean-New Orleans-Chicago musical diaspora that reached an apotheosis in the Harlem Renaissance.

Minton’s takes great pride in celebrating the continuation of that Renaissance with The Dance of Eleggua, a music festival of sixteen performances that mark a point of departure and a new beginning in the perpetual rebirth of jazz – beginning with the dynamic ensemble AfroHORN, which emerged from the Sun Ra Arkestra.

Minton’s in Harlem presents: Jazz at the Crossroads: The Dance of Eleggua
Tuesdays May 13th – August 26th

“Some of the most inventive and wildly original music to be played and heard since the first progressive rumbles of the early ’60s….Mora-Catlett’s apotheosis as a master musician —Steve Bryant (iROCK JAZZ)

Afro-Latino drummer Francisco Mora-Catlett has participated in some of the most exciting experiments in jazz history, ranging from Sun Ra to Max Roach’s M’Boom Percussion Choir. With his AfroHORN project, Mora-Catlett, a formidable composer and conceptualist, maps the secret paths that connect avant–garde jazz to Cuban folklore, African mysticism and Latin American surrealism. His multi-cultural and multi-generational band features some of the most innovative jazzistas on the scene: AfroCuban stars Aruan Ortiz on piano and Roman Diaz on percussion, Rashaan Carter on bass, saxmen Sam Newsome on soprano and Alex Harding on baritone. The band’s heat attracts illustrious jazzmen: Jack Walrath, Donald Harrison, Steve Turre and J.D. Allen have jammed with AfroHORN at Jazz Standard, the 2013 Winter Jazzfest and The Detroit Jazz Festival.

Jazz at the Crossroads: The Dance of Eleggua was curated for Minton’s by Dita Sullivan / New Dimensions in Latin Jazz.

This Latin jazz isn’t a subset of jazz, it’s the next manifestation of jazz, a rebirth and at the same time, an authentic continuation of the original jazz which emerged from the cultural nexus of the Gulf of Mexico. Jazz owes so much to the music and ambience of New Orleans Creoles: Jelly Roll Morton and the many other musicians of Afro-Caribbean-French-Spanish descent, from Sidney Bechet to King Oliver, Johnny St Cyr, Paul Dominguez, Kid Ory, Armand Piron and Alphonse Picou. So in a way, this series brings it all back home. New York 2007- 2014 has a lot in common with New Orleans 1907-1914.