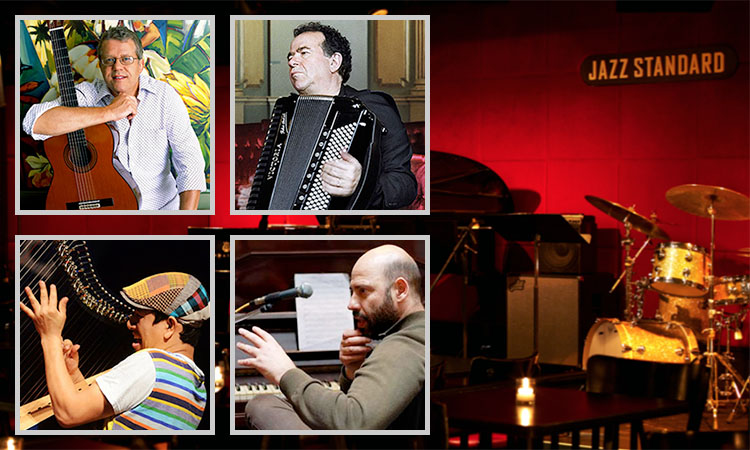 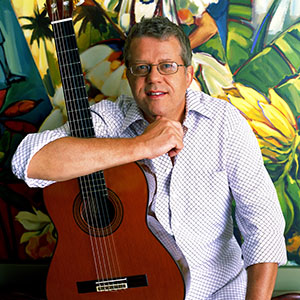 Romero Lubambo: guitar; Helio Alves: piano; Hans Glawishnig: bass; Mauricio Zotarelli: drums
Romero Lubambo—praised by the late Herbie Mann as “the best Brazilian guitarist there is”—is an uncommonly gifted soloist and musical improviser with a steady stream of unpredictably creative musical thoughts that range from the cool, sophisticated rhythms of Brazil to bracing hard bop. The guitarist has established himself as a composer and performer on his own critically acclaimed re­cording projects as well as on those of Trio Da Paz (with Nilson Matta and Duduka da Fonseca). As a first-call sideman, Romero Lubambo has worked with artists from Yo-Yo Ma and Kathleen Battle to Harry Belafonte and Wynton Marsalis. In February 2013, Romero appeared on our stage performing intimate duets with singer Luciana Souza. This week, he returns at the helm of his fine quartet featuring the versatile pianist Helio Alves.
Music Charge: $25 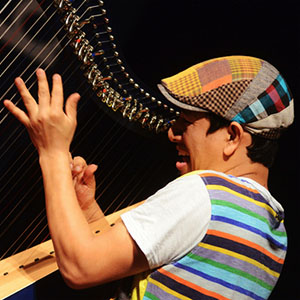 Edmar Castaneda: Colombian harp (arpa llanera); Gregoire Maret: harmonica; Itai Kriss: flute; Marshall Gilkes: trombone; Pablo Vergara: piano; David Silliman: percussion; Rodrigo Villalon: drums; Andrea Tierra: vocals; Tamer Pinarbasi: canun; Serio Krakowski: pandero
“Edmar is… an enormous talent,” says award-winning saxophonist Paquito D’Rivera. “He has the versatility and the enchanting charisma of a musician who has taken his harp out of the shadow to become one of the most original musicians from the Big Apple.” With the release of Entre Cuerdas—his latest album and first with ArtistShare—Castañeda unveils an enchanting set of new compositions performed by his expanded World Ensemble. For this exclusive engagement, the group will include trombonist Marshall Gilkes (who appears on Entre Cuerdas), harmonica wizard Gregoire Maret, and vocalist Andrea Tierra. “Edmar Castañeda is a virtuoso, and a modern jazz musician in that he collects different musical languages of the New World and melts them together, fusing them with swing and improvisation…He can turn a harp into a bass, a guitar, a piano and a hand drum.” (The New York Times)
Music Charge: $25 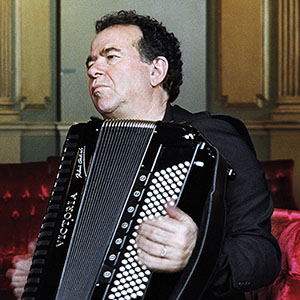 Richard Galliano: accordion; Josh Nelson: piano; Peter Bernstein: guitar; George Mraz: bass; Mauricio Zottarelli: drums
Richard Galliano was born in Cannes, France in 1950, the son of an accordion teacher and a student of the instrument from the age of four. Galliano was fourteen when he discovered the music of trumpeter Clifford Brown – and later the works of adventurous accordionists from Brazil (Sivuca), Italy (Felice Fugazza), and the US (Art Van Damme). Over time, Galliano developed his patented “new musette” style, breathing new life into a thoroughly French tradition; he has played on countless recordings by French pop artists like Charles Aznavour and Juliette Gréco, as well as with Chet Baker, Toots Thielemanns, and Ron Carter. On such exceptional albums as New York Tango (1996, with George Mraz, Al Foster and Birélli Lagrène), Ricardo Galliano’s technical command, mastery of phrasing, and rainbow palette of tonal colors have allowed him to surmount musical barriers with a sound that cuts across all genres.
Music Charge: $25/$30 Friday & Saturday 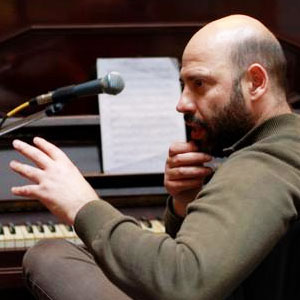 Miguel Zenon: alto saxophone; Mark Turner: tenor saxophone; Guillermo Klein: piano; Aaron Goldberg: piano/Rhodes
In 2011, the brilliant and enigmatic composer/arranger Guillermo Klein and the gifted pianist Aaron Goldberg joined forces for a Sunnyside album entitled Bienestan—a collection of potent originals and provocative interpretations of jazz standards with Goldberg on acoustic piano and Klein manning the Fender Rhodes electric piano. Special guests Miguel Zenón on alto sax and Chris Cheek on tenor and soprano saxes augmented the proceedings on five tracks. For tonight’s special Jazz Standard engagement, the two keyboard masters will revisit this fertile ground with Zenón reprising his alto role and joined by the incisive tenor man Mark Turner. “It’s all Guillermo’s music and arrangements, and that was the idea,” Goldberg stated at the time of the CD release. “We were conceiving of it almost in a Gil Evans/Miles Davis kind of way, where I was the featured soloist and he was thinking of me when he wrote the stuff. I didn’t contribute anything compositionally—I wanted to do something that would put me in Guillermo’s universe, so to speak.”
Music Charge: $25

The New Canadian Global Music Orchestra is a creation of The Royal Conservatory, which has brought together professional musicians from...
FROM OUR VINYL STORE