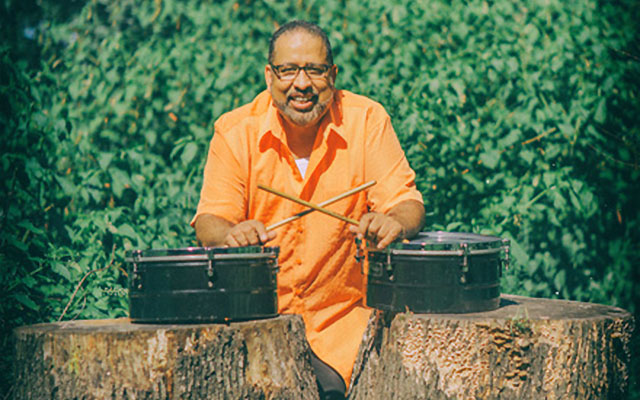 “Latin jazz is one of the few distinct art forms the USA has given the world. Ralph Irizarry and Timbalaye’s new CD give us abundant glimpses of the past, present and future of this genre. It’s a celebration of the group’s 20th anniversary and it offers the listeners more of the unique and fresh interpretations that Timbalaye’s fans have long embraced and have come to expect.” — Oscar Hernández

“For all you Timbalaye fans who waited patiently for another jam, here’s the Timbalaye 20th Anniversary CD. It’s a complete labor of love by everybody involved so I hope you enjoy it as much as we enjoyed recording it.” — Ralph Irizarry

Marcela Joya: Ralph, I was and am pleased to learn Timbalaye is back with its 20th Anniversary album. Before we talk about the group’s return, let’s go back to the beginning of your career. I’m curious to learn how and why you chose the timbales as your primary instrument.

Ralph Irizarry: This is not one of those stories about a famous musician who said, I started when I was three or four years old, like a lot of guys who had parents who were in the music business. Nobody in my family was in the music industry, but my father used to lend money to people, so I remember when I was about eight years old, my father lent money to a guy who was a drug-addict, 25 dollars or something like that, but the guy didn’t have the money to pay him back, so he offered him a set of timbales in exchange for the money. My father thought it was better to get something than nothing, so he accepted them (Laughs).

Somehow, he knew that me and my brothers were always banging on things, like the cover of the radiator, so he gave us the timbales. They had real skins, probably calf skins! They were beautiful, but for us, they were a toy. So we made a pair of sticks from clothes hangers and played the timbales. We destroyed the skins on the first day!! (Laughs)

Seven years later, I was living in Queens, and a neighbor came around with a Mexican conga drum, you know, those cheap Mexican drums that come with two colors and are horrible and said: “Are you Spanish, man? You know how to play congas ’cause I got those and I´m looking for someone to jam.”

I remembered that when I was about thirteen years old I would go to the park and see these guys playing conga and timbales, and my blood would start boiling and I would get nervous and excited. I told the guy there was a set of timbales I used to play with when I was a little boy. I asked my mother for the timbales, and we found them exactly in the same condition we left them years ago. So I bought plastic skins (the ones they use today) and joined my neighbor. I remember I hit the timbale one time, and it was like love at first sight, I felt something I have never felt before. All my skin felt it. I shook. Two days later I went to Manny’s music store on 48th street and bought brand new timbales, sticks, everything… and I haven’t stopped since… that was 45 years ago.

You didn’t begin your career in New York, right? I understand you moved to Puerto Rico for a few years, and you performed with bands like La Terrífica.

I had some gigs in New York before going to La Isla, nothing significant. In 1971, my parents moved back to Puerto Rico. I had never been there before, so I was excited. I got to play with great people like La Terrífica, La Orquesta Mundo, with Enrique Guzmán, but I encountered a problem in Puerto Rico because I am a Nuyorican. In the early 70’s, there was an enormous prejudice towards people who came from New York, maybe because New Yorkers who went to La Isla, thought they were better than Puerto Ricans. So I came back because I couldn’t take it anymore.

You’ve said that you grew as an artist while playing with Ray Barretto. Also, you participated in the amazing album, Ricanstruction (1979) How did that happen? 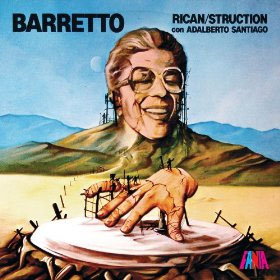 I was playing at the Corso Ballroom (a famous venue in Manhattan, once located on 86 Street and 3rd Avenue) when the manager came up to me and said, “Ray Barretto is putting together a new orchestra, and he’s looking for musicians. I told him to come and see you play.” It was a Sunday night, and there was a blizzard, something like fifteen inches of snow on the ground and it was fricking cold! So, I didn’t think Ray would show up.

During the first set, I was so nervous I couldn’t play. From the bandstand you could see the entrance, so knowing Barretto may see me ruined my night. All I could do was look at the door to see if Barretto was coming. I was a mess but, fortunately, the place was empty. You had to be crazy to come out on a night like that. So, after the second set I said to myself: “Good, he’s not going to come.”

So, for the third set I relaxed and played because I stopped focusing on the door. I took a solo on the last tune (I was playing with La Charanga Novedades), and I wasn’t nervous because I wasn’t waiting for Barretto, but after I had finished the solo, I looked at the door, and I saw this big man, shaking the snow off his coat and cleaning his glasses and my heart skipped a beat! Ray Barretto was standing there, and he arrived just in time to listen to my solo.

I almost died. No exaggeration. He came to me and said: “Nice solo kid, it was a nice solo. Come, let’s talk.” Then he told me he was putting together a band and asked me if I would like to join. Oh my God, I couldn’t believe it. Of course, I said yes and he said he would call me. It was the winter of 1976.

Before you ever met Ray you were a serious fan, yes?

Qué qué? I was more than that. Before I started playing timbales, Orestes Vilató was my favorite timbalero, and I used to follow Ray Barretto’s band around like a little puppy dog. I wasn’t even a musician or anything, but I have a record that he signed for me when I was a fan. So for me to go from being a fan to being in Ray’s band was a dream come true.

How did the dream evolve? How was it working with Barretto?

Everything was great. He was a shy guy. He didn’t talk a lot, but he was a wise man. I learned a lot with Ray. He made me a better bandleader; he made me a better musician. Playing and rehearsing with him was like going to school. And I love the fact that he always gave young musicians a chance. He always surrounded himself with young talent.

You left Barretto’s band to be a founding member of Seis del Solar. How did that happen? How did Barretto take the news?

It was hard. I had to leave Ray to go with Blades, in 1983. We were all going to Boston, and Oscar Hernández was also about to leave the band to go with Blades. So in our way to Boston, Oscar let him know, and Ray was like “Damn, I hate to see you going, but I understand, you got to do what you get to do, man”. And then, in our way back to New York, it’s me. Ray used to sit on the front part of the bus, so I went there slowly, like a little kid, and said: “Ray I get a talk to you. I’m leaving the band.” There was silence and the he said: what do you mean you are leaving the band?, And I was like: “Yeah, I am going with Rubén Blades.” Oh my, God, all hell broke loose… “What the fuck, why does Rubén Blades have to take my musicians? What the hell!” He freaked out, he started yelling, he got crazy (Laughs).

Ray wasn’t doing that well at that time, right?

Right. I knew the salsa world was the singer’s world and Ray used to tell us that the reason he didn’t get the opportunities that Cheo Feliciano, Rubén Blades, Ismael Miranda and many other singers were getting was because he wasn’t a singer. Singers were and had always been the ones that catch people’s attention and set the market. So I knew Rubén Blades had split with Willie Colón, and they were touring the world. They were one of the hottest items in Latin music. I knew that Rubén’s band was going be big and that I was going to be on another level. Also, Blades was putting together a sextet, and it was going to be easier to travel. Rubén was a fan of the Joe Cuba Sextet. He knew what he was doing. Ray Barreto was traveling with twelve people. Blades was going to travel with six, so there were going be more opportunities to travel and work.