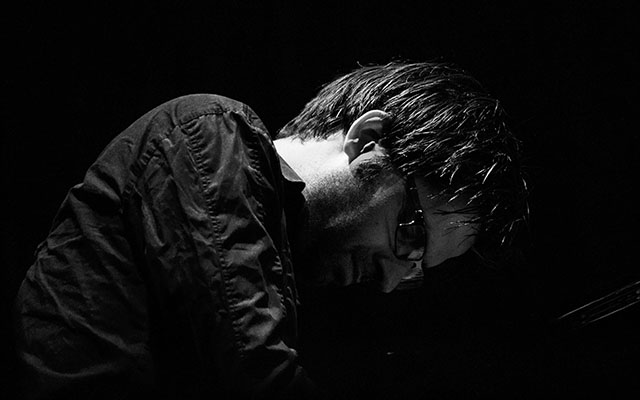 “Sebastian Schunke brings with Life and Death a new and very intimate touch to his music – piano solo. For the first time Sebastian plays part of his highly aclaimed compositions as a Solo pianist. On the other 4 compositions he presents his new band – the new wild high energetic young Berlin – Dan Freeman on tenor, Diego Pinera on drums and Marcel Krömker on bass. This band already toured the world with Sebastian, developing a new not yet seen and heard Modern Sound in Latin Jazz – it is maybe the most innovative band of Latin Jazz existing. The band is supported in a great way by percussionist and Grammy Award Winner Pernell Saturnino.

On this new release, Life and Death his compositions are changing: he opens up the harmonic and the compositional structure of the songs. He keeps his music fresh and wild and leads the music to a hip experimental world jazz – totally new and unpredictably!”

LJN: Hello Sebastian, welcome again to the pages of Latin Jazz Network. It’s always a pleasure talking to you. Let’s get started with this interview by asking you about your newest recording entitled “Life and Death.” First of all, why “Life and Death”? What’s the meaning/message you wanted to convey with your latest production?

SS: Hi Danilo, for me it is also a big pleasure to be featured again on the great platform LatinJazzNet. As always you start with a tough question. The title has on the one hand some very personal reasons and on the other hand it seems to be a natural title when you come to a certain point in your life. The personal aspect: three years ago, in 2008, when I released “Back in New York” my life was different – it was still similar to the recent years. And then: my little daughter was born in 2009 – so I experienced the magic moment of a human being to be born – to come to life – and this little human being was my own daughter – this is an overwhelming, strong feeling – above all, as the pregnancy had a lot of up and downs – this was the great “life” experience since the last recording. Unfortunately, my family lost also two members because of cancer – so there you become pretty much aware of how brutal life can come to an end – and you face death. That was the personal sad experience of “death”. That is why I titled the CD “Life and death”.

When you have released some CDs and when you have traveled and played a lot – your intention of doing music changes – it all becomes a more deep sense as you question yourself more about “life and death” in general, why are we here and what is it all about?

LJN: Please tell us about the songs included in “Life and Death”

SS: I can see three type of songs included on “Life and Death”:

Concerning the other Group tunes, I composed the way I usually prefer to compose – I knew the band members – so I could imagine the group sound and I wanted to bring my music again to new unkown borders. Actually, I am very proud of the compositions “Berlin”, “Adelante” and “Misterioso”. I think you can still hear the old “Schunke” but at the same time see the new horizons – I included more the free space – but also concentrated on strong but unusual rhythms and on opening up the harmonic structure.

Finally, there are the songs for solo piano. This was a totally new experience for me – to find my voice as a solo pianist and my style as a composer for solo piano: these are the songs “Rapsodia No. 1”, “Ohnmacht” and “Kanon Final”. I tried new compositional elements – I forced myself to invent new approaches to create sounds and harmonies on the piano – I was nervous at the beginning – but I really begin to like it a lot.

LJN: Please tell us about your new band and its members.

SS: I recorded with my new band, which I formed in autumn 2008 – right after the release of “Back in New York”. We had a great China tour in 2008 and at once I could feel the special energy of this band. It is my Berlin Quartet – we toured a lot – and so I think that you can hear a strong Band Sound. We have a lot of fun traveling and playing together. I am very proud of this group – as I feel a strong unique group sound – and I feel free in my way of playing thanks to their understanding – it feels very good. So there is Marcel Krömker on bass, Diego Pinera on drums and Dan Freeman on sax. Dan already recorded some tunes on “Vida Pura”. For the first time I am now the “old” guy – they are young and very good players. They have all the same age and they are “hungry” – I like that – they keep my sound fresh and unpredictable – that is what we want: to surprise and to challenge.

And I was very lucky to add to the band and record again after “Back in New York” with Pernell Saturnino – one of my favorite percussion players – he is awesome and fits perfectly in the group sound – so it is a kind of special mixture of Berlin and New York.

LJN: How do you feel after having accomplished several recordings, performing and touring?

SS: Oh Danilo, another tough one – I ask myself often this question and do not get a straight answer. So let me try it – on the one hand, I feel happy to have met great musicians who played my music in a way that I really like and love. I feel very happy and thankful about everybody, like LatinJazzNet who really is listening to my music – to all of my music. So all of you guys are like family – as my music is very personal – as music should be in general. Having several of your own recordings, it is interesting to listen to your former projects – it is sometimes as if you listen to somebody else – somehow you can see your own story. This is the best part – you can see that your music still seems to work – so that there will be a chance to do a lot more recordings, to tell a lot more stories and to meet a lot more great musicians and listeners. I love that idea – I am already planning new projects. I had so many great experiences touring and playing my music – I feel very grateful.

But we all know – creative music is in a tough process – some festivals are more and more afraid of having bands who do not fit in a certain frame – and to be honest my music does not fit in any of these frameworks – a European – even German, who lived in New York and Berlin, makes a kind of Latin Jazz, but changing all the traditional rhythms in mostly odd meters, using strange harmonies and even including free parts – combining everything and mixing it to a whatever brew. I would say – it is just music, it is just what I feel – but that is not a big selling point. So I often have to struggle to convince people to not be afraid and just listen.

LJN: You’ve been touring South America during the recent years. What kind of experience have you had?

SS: Actually, in South America I do not have to struggle at all – strange enough. It is so great to travel and play in South America – People are really open. Young and older people come to the concerts – they do listen, they do understand and they give you a lot of energy – I only had very very good experiences in South America – I played a lot in Colombia, Venezuela, Chile, Uruguay, and Peru – and I was always freaked out in a positive way! So hopefully there will be a lot of more gigs coming up in South America.

LJN: Thank you Sebastian for updating our readers on your new project “Life and Death”, Congratulations and all the best in your future endeavors.