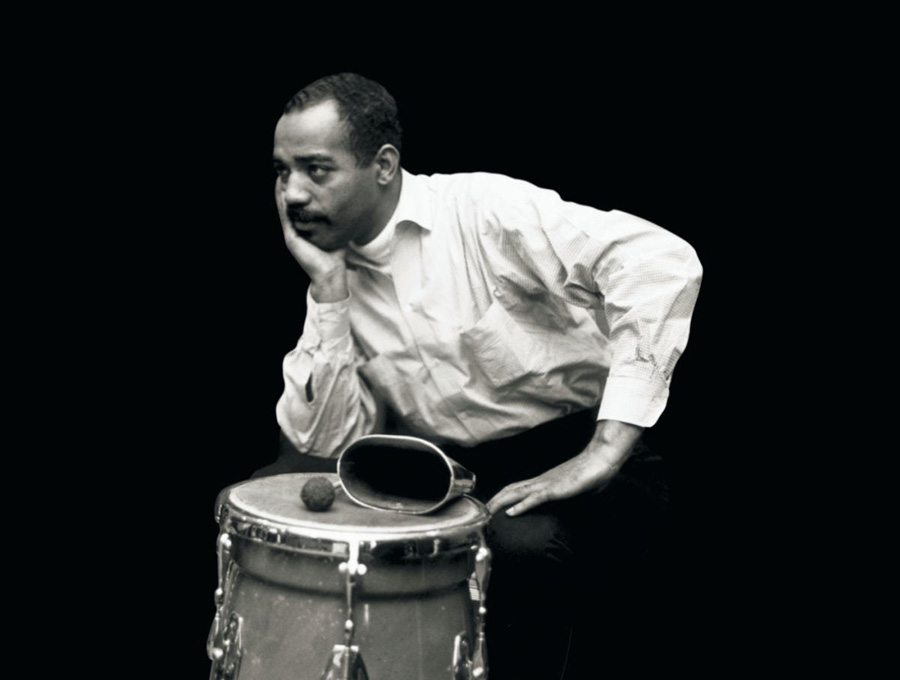 WILLIAM CORREA, better known as WILLIE BOBO, was a consummate percussionist, drummer, vocalist and showman. He was born to Puerto Rican parents on February 28, 1934, in Spanish Harlem and influenced by a broad variety of music, including Latin rhythms, Jazz, Blues, and R&B.

His first gig was as a band boy with the legendary Cuban bandleader, Frank “Machito” Grillo, and The Afro-Cubans. Shortly after that, he appeared as a sideman on pianist George Shearing’s, The Shearing Spell (1955).

At fourteen, he gravitated to the bongos, congas, timbales, and trap drums and studied under the legendary master Cuban percussionist, Mongo Santamaría. “Willie was mesmerized by Mongo,” says writer, historian Max Salazar, “Mongo took him on as a student and taught him everything about the drums.”

In 1954, Santamaría convinced Tito Puente to hire Bobo and replace Manny Oquendo on bongos. According to Joe Conzo Sr., “There was a bit of a rivalry between them,” but Puente grudgingly conceded, “He was a guy who could go toe to toe with me and not even blink.”

In 1955, Bobo appeared on the album, Piano Contempo: Modern Jazz Piano with the jazz pianist, Mary Lou Williams. For reasons that are not clear, it was she who gave Correa the nickname, “Bobo.”

1963 saw the release of the album Bobo’s Beat (Roulette), his first as a leader, followed quickly by Bobo! Do That Thing/Guajira [Tico]. The albums were moderately successful.

In 1965, Bobo was invited to perform as a sideman on the Swedish vibraphonist Cal Tjader’s phenomenally successful record, Soul Sauce (Verve). “Tjader invited Bobo to overdub the jawbone (a percussion instrument made from the jawbone of a donkey, known as a Quijada, or Charrasca). His inspirations, ‘Sabor, Sabor, Salsa Ahi Na Ma,’ satisfied Tjader. Bobo explained to Tjader the tracks Pantano, Maramoor, Tanya, and Leyte, were fiery and exciting, like a well-seasoned sauce. As a result, the album cover exhibits a fork on a plate of red beans and chili alongside an opened bottle of Tabasco sauce labeled, ‘Cal Tjader, Soul Sauce.'”

During the late 1960s and 1970s, Bobo was very active. In 1969 he moved to Los Angeles, where he led several combos. Also, from 1969 to 1971, he appeared as a member of the cast of the Bill Cosby Show. During that period he also traveled to Ghana with guitarist, Carlos Santana, and appeared in the documentary film Soul to Soul. Moreover, in 1976, Bobo appeared in a short-lived variety show and recorded for the labels, Sussex, Blue Note, and CBS Records as a sideman with Miles Davis, Stan Getz, Cannonball Adderley, Sonny Stitt, Herbie Mann, Gene Ammons, Shelly Mann, and Terry Gibbs.

Despite being diagnosed with cancer Bobo reunited with Mongo Santamaria, at the 1983 Playboy Jazz Festival and was active up until the end of his life.

In 2010 I interviewed master conguero, Poncho Sánchez, and he spoke candidly about the last time he saw Bobo. “I was playing at a club called, The Baked Potato with the (pianist) Claire Fischer and the group Salsa Picante. Willie came by to see us play, and he had a patch behind his ear. I asked him about it and he told me he had just come from the doctor and had a malignant cyst removed. He died six months later. The last time I saw Willie was when me and other musicians got together and raised money for his medical expenses. He was in a wheelchair and wanted no one to see him in that condition, so he came to the venue’s back door and asked me to thank everyone for what they were doing. Then he got into a van and drove off.”

Bobo died on September 15, 1983, at the age of 49. The cause of death was brain cancer. For a time, Bobo’s son, Eric, a drummer and percussionist led his father’s band. He also performed with Cypress Hill and toured with the Beastie Boys. His grandson, William Valen Correa, is the co-founder of the Los Angeles-based non-profit organization HNDP.

According to his wife, Alicia, “He once said that a great artist always gets recognized at the end.” “He wanted everyone to be happy, no sorrow,” said Eric. “This is how his life was, happy, smiling, to have a good time.” Thankfully, Willie Bobo’s extensive body of work is widely available.