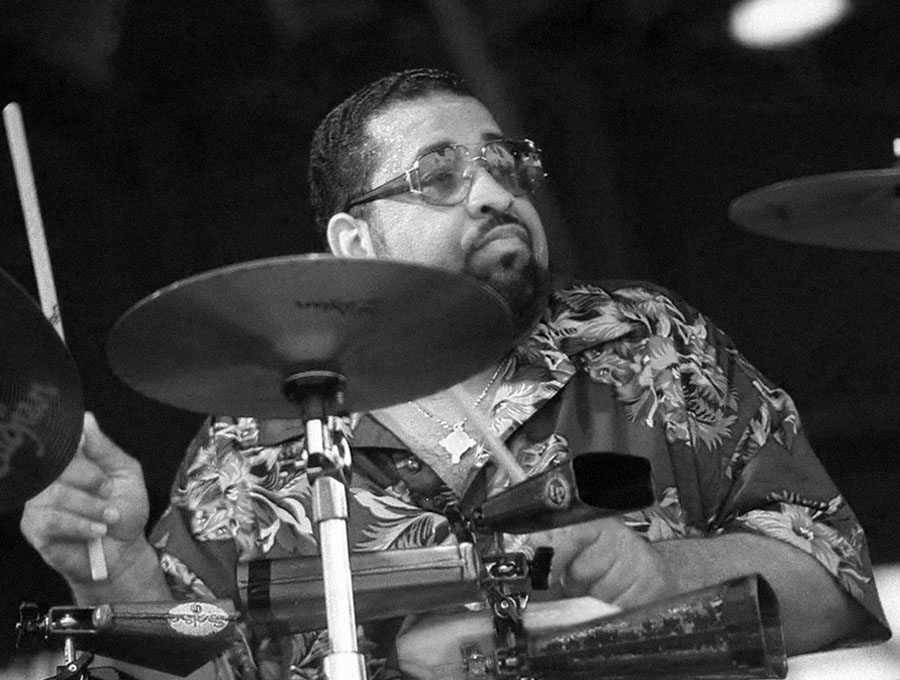 The music world mourns the loss of one of his greatest artists. A true master of his craft, bandleader, percussionist, timbalero Ralph Irizarry Sr. (Bronx, New York), passed away on September 5, 2021 at the age of 67, of complications from a deteriorating health condition. Latin Jazz Network pays tribute to his musical legacy.

Ralph Irizarry, recognized worldwide as an excellent percussionist, first fell in love with the timbal at an early age when his father coincidentally brought home a set received as payment for a debt. A self-taught musician, Irizarry developed a highly efficient and personalized style of playing while leaving an enduring mark on the artists with whom he collaborated. His love for the instrument evolved into a full-fledged passion that fueled his career since 1970. Irizarry acknowledged, without reservation, that this passion had been all consuming since he was a youngster, and that it was the same passion that he always infused into his music.

Born in New York’s Spanish Harlem, Ralph Irizarry’s family first moved to Brooklyn and then briefly to Queens, before finally relocating in Puerto Rico in 1970. There, he spent three years immersed in music and gained the knowledge and experience that eventually granted him the opportunity to join Ponce’s La Terrífica, as well as sitting in with such prestigious aggregations as El Gran Combo and Sonora Ponceña.

In 1974, Ralph Irizarry returned to New York City to pursue a career as a professional musician. After playing and recording with local groups for almost four years, his big break finally came when Ray Barretto invited him to join his top-ranked orchestra and shortly afterward, they were in studio recording the first of six productions.

In April of 1983, Rubén Blades sought out Irizarry to join in the formation of Seis Del Solar. This association lasted for fourteen years and consisted of intense performing and traveling as well as the production of eight recordings. After Blades left and with his encouragement, the group continued performing and recorded two Latin jazz albums.

In 1996, Ralph Irizarry created his own Latin jazz project, Timbalaye, a Latin jazz septet with a different instrumental format: Latin percussion instruments instead of the typical American drum set, as well as a fresh approach and innovative sound. Timbalaye’s repertoire always combined sophisticated contemporary jazz harmonic schemes with rhythmic elements and patterns from Latin America, Africa and the Caribbean [Cuba and Puerto Rico].

Two years after the group’s inception, in 1998, came their first release, Ralph Irizarry and Timbalaye, on Shanachie Records.

“Ralph is a star of the future who never forgets the Latin basics. The band is burning!!!” – Tito Puente

Best Kept Secret, their second album, was also released on Shanachie Records in 2000.

“Exciting, smart music; a new way of thinking about Latin jazz. Mr. Irizarry is an explosive percussionist who has changed the way Latin jazz groups work, leading an ensemble instead of a group of soloists!” – New York Times

“Innovative and powerful, Irizarry leads one of the best Latin jazz ensembles ever to perform. Truly outstanding in every way!” – Rubén Blades

In 2003, It’s Time, produced by Irizarry, was released on BKS Records.

The year 2013 definitely marked the beginning of a new stage in the life of the group and many exciting things happened for Timbalaye, such as a return to the recording studio and scheduled performances the world over. The addition of a new crop of incredibly talented young musicians whose individual styling breathed new life to the all-original repertoire guaranteed the complete success of the group’s new endeavors.

“After seen so many trends come and go, what I’ve always aimed to achieve remains unchanged, maintaining the traditions and roots of the music we originally fell in love with,” said Irizarry at that time. “Since record labels seem to be a thing of the past and (we) musicians still have the creative drive and a need to produce recorded material, I believe it’s a true blessing to be able to deliver to music fans a highly dynamic product.”

SonCafé was Ralph Irizarry’s son and salsa ensemble structured in the typical conjunto fashion. The group made an impact on New York City’s Latin music scene. Evolved from his former ‘Son Criollo’ sextet, the eight-piece powerhouse was integrated by seasoned musicians and outstanding vocalists.

SonCafé‘s exciting novel sound and powerful delivery encompassed a blend of diverse influences pleasing to listening and dance audiences alike. Since its inception SonCafé released two CDs in the marketplace on BKS Records, the debut CD entitled Bailando Con… ¡Azúcar! in 2005 and the all medley’s CD Tributo in 2006. As well as a Live Performance DVD entitled En Grande y En Vivo!

In 2012, Ralph Irizarry returned to the arena as leader of Los Viejos de la Salsa, an absolute powerful aggregation integrated by a group of experienced musicians who had shared stages with Irizarry the world over for more than forty years and, of course, a new recorded product. The album, entitled Viejos Pero Sabrosos, packs twelve incredible tunes—nine of which are original compositions—very well fit for anyone’s discriminating listening and dancing pleasures.

The band Los Viejos de la Salsa was made of seasoned musicians, like Eddie Montalvo, Elias Lopes, Reynaldo Jorge, Edy Martinez and a host of others, who had shared stages with Irizarry for over 40 years and had nothing to prove any longer, as they had kicked butt so many times in the past. Here, within this brand new aggregation, they sounded like if they were playing exclusively for the love of music. And yes, they kicked butt once again!

Bruce Polin of descarga.com says, “Viejos Pero Sabrosos is a relentless barrage of fist-in-the-air salsa. It’s a statement about salsa musicians transcending age/time and, like a fine wine, can actually distill into something greater than its younger, less seasoned counterparts. It’s homage to the players of the past (Reunión Celestial sings the praises of the Fania All Stars) and an affirmation of the potency of the elder generation (Como El Vino).”

Indeed, the concept behind the CD was to showcase and emphasize the continued level of excellence and experience achieved throughout the years by these veteran musicians. Their contributions have laid the foundation for younger generations who have followed in their footsteps. Short of needing oxygen tanks, wheelchairs and canes, they delivered in an unparalleled fashioned. And, guess what? Like aging wine they were better than ever!

Tribute to the Masters: Astor Piazzolla