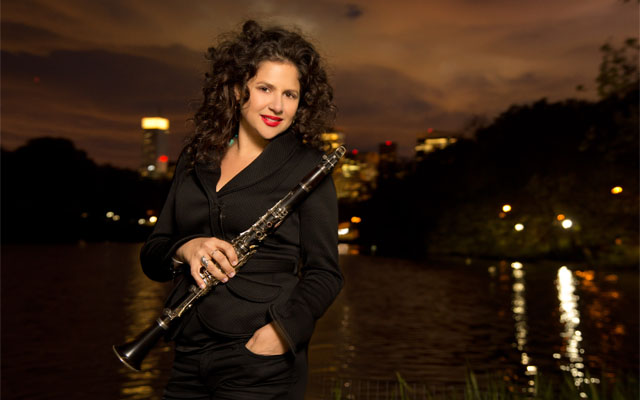 With clave in her soul

It has been clear for some time now, that the clarinet and an array of saxophones, at the hands of Anat Cohen, are such powerful instruments that they can alter the state of mind. Such a phenomenon happened once again on Notes from the Village, her fourth and utterly bewitching record. Her reputation in the ocean of contemporary music long since established this part of her odyssey finds Anat Cohen on a rarified plane as she explores the entire breadth of the tonal values of the reeds and woodwinds. Her notes and phrases may take great spritely leaps, or may hang heavy with emotion. When she dapples some notes with splashes of subtle shades and rhythmic accents, she shows how she has mastered each instrument – twisting the yin and yang out of them. Anat Cohen has a clave hidden in her soul! 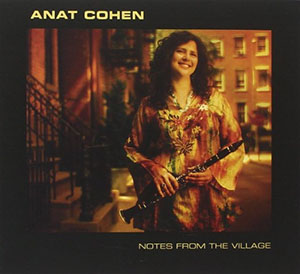 Notes from the Village occupies a large musical canvas. Cohen traverses a soundscape from the exuberant rhythms of Africa — “Washington Square Park” — with Jason Lindner’s piano and electronics and Gilad Hekselman’s guitar taking center-stage in the wildly exciting musical journey that criss-crosses the primal and the pastoral. “Until You’re In Love Again” contours a dirge-like mood from the depths of the soul, but ends up quite exultant in the end. Ernesto Lecuona’s mystical “Siboney” is a tour de force that channels the true heart of Cuban son. On John Coltrane’s exquisite ballad, “After The Rain,” arrangers Lindner and Cohen have slowed the tempo of the piece to reflect an almost glacial image of wet earth.  In a masterstroke, Anat Cohen chose the bass clarinet to communicate a mood in which peace has returned to earth just as the water that returned to the skies. “J Blues” is gut wrenching, and elevating. Here Anat Cohen hits the bent, blue notes with elemental sadness as Lindner and bassist Omer Avital solo with brilliant inventiveness.

The record approaches its conclusion with a piercing, heart-stopping composition “Lullaby for the Native Ones,” a song so fraught with dynamic tension that is built with such precision by Cohen’s tenor saxophone that it literally explodes on the consciousness when it is done and the new arrangement of Sam Cooke’s “Change is Gonna Come” is almost a welcome relief! Moreover, just when you thought that the level of dynamism could not reach any greater height, Cohen and her group turn in a magnificently boppish version of the Fats Waller classic, “Jitterbug Waltz”. Played at a daring pace and with almost Mingus-like shifts in rhythm, this concluding track is perhaps the most extraordinary arrangement of Waller’s composition since Eric Dolphy turned it inside out in his iconic 60s version. Notes from the Village highlights the talent of Anat Cohen in a much smaller group setting than Noir, but the ocean of sound is magnificently expansive.

Every once and awhile – on every project she touches  be it the records as leader, or her work with the Choro  Ensemble, or even the fabulous 3 Cohens record she made – Anat Cohen provides a clue as to where we might find the joy of a soaring soul. It is a space where tone and rhythm come together – if not as one, then in a double helix. Therefore, intertwined, tone and rhythm become one molten whole in time and space, as the great Sufi musician proposed and found.

On Time and Place, it hovers and swirls about in the music of “The 7th of March” and in the lament, “Pour Toi.” On Poetica there is a whole cycle of songs, from “Hofim” to “Nigunim,” “Eyn Gedi” and “Agada Yapanit.” There is a subtle, but significant difference on Noir, where this soulful searching is everywhere. However, in Noir, that unity of time and space, tone and rhythm comes through on “You Never Told Me That You Care.” Braid has it and the song is “Tfila (Prayer).”

Finally in Notes from the Village, in the spiritual wandering of musician, as the ship comes ashore, you feel the magnificent Sufism of Anat Cohen almost omnipresent. It comes in waves – on “Until You’re In Love Again”and “Siboney.” Then it gets stronger and stronger – on tracks like “After the Rain” and becomes dynamically intense on “Lullaby for the Naïve Ones.”

The Odyssey is probably far from over, but in the music of Anat Cohen, especially in those elected to push her soul deeper into meaningful territory. Moreover, even though we all know that our limited minds and hearts cannot engage in the infinite possibilities of our individual journeys, we hear God, in the silence of our hearts, and as He whispers, we become aware that there are ways of reaching beyond ourselves. Anat Cohen certainly has and there is the music to testify. “I am seeking you, my soul is thirsting for you, my flesh is longing for you, Cohen’s musical voice may say, “… a land parched and weary and waterless may lie ahead – who knows – but I find you in that masterful union of tone and rhythm in time and space.