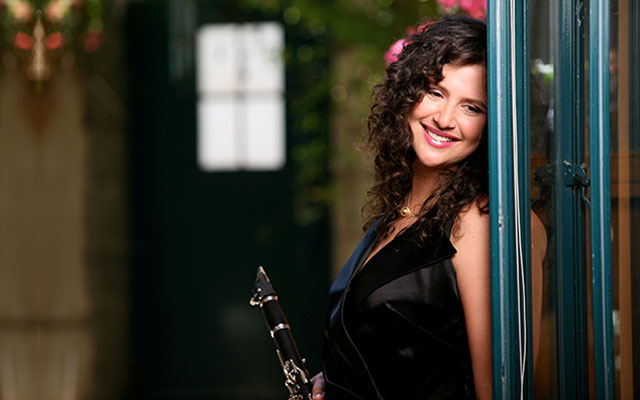 A cry of longing

In addition, when the music moved her to tears she could capture in quick sketches, with gusting breath and sinewy elegance her journey from the land of her birth to the land promised to her should she choose to sound a prophetic phrase in praise of this human migration. This she chose to do in the idiom of The Music forever inflected with the unmistakable ululation of the weeping desert wind as it blew uncertainly across that beautiful land.

Something unique has happened here. I have been touched not just by the sounds of Cohen’s music – I have been touched by the hidden spirit guides as the notes sound solitarily, in the synchopated syntax that tumbles wistfully from the horn of the tenor, accenting the melancholy with the odd flurry of notes that daly and hang with magical sadness. “Place and Time” is a song that comes from Anat Cohen’s first eponymously entitled first record as leader. The choice of instrument sings boldly of a long journey taken, away from home. The possibility of not looking back, much less looking back looms large in the melody with moves from wistfullness to bright resolution.

I discovered recently – about a decade ago – that my friend from the toddler days of childhood, Julian Askenazey and his sister Becky were my only connection with my favorite part of Israel. I found that my late aunt Margot Barenboim had been a child of Auschwitz. A soldier of the guard was moved by her and helped her to escape. She found her way to England, married my father’s brother and that gave me the closest bloodline to Israel. My Israeli family continues to live in the Sinai and because the paternal side of my family is Brasilian I am sure that my cousins there understand the true meaning – Biblical or otherwise – of saudades and of alegria and the chorinho will instantly echo in their hearts when the moon carries a song there. 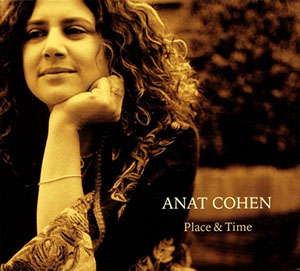 Place and Time has a special place in my heart and soul. It is all about that first and final wrench away from the blood of the land that nurtured your human soul.  In 1999 Anat Cohen took this soul and opened her innermost, heartfelt feelings to it. Her soul was in bloom. Cohen was able to become the channel for its yearnings, memories and bright beacons that shed light on the way forward.

Tellingly – and this is something many miss – the music that swirls around the land of Isreal/Palestine/Holy Land, whatever you want to call it – Oasis of Peace – is what I prefer having imbibed its ancient history and vivid spirit for thirteen years. What we miss is that rich confluence of cultural interaction that has always been alive for thousands of years before we allowed ourselves to become brainwashed – slaves to colonialism.  We forgot, for instance the 12 tribes who gathered here brought riches beyond imagination. As the Diaspora gathered there came song praise from early European music, then Ethopian and more African and also India – as that part of the diaspora grew… folk music from far and wide – as north as Russia and as Far west as Latin America.

In this stew, Anat Cohen has an epiphany: the musician communed with a Sufi master, a saint and musician who positted that “Rhythm cannot exist without tone, nor tone without rhythm. They are interdependent from their existence, and it is the same with time and space,” said the great Hazrat Inayat Khan.

This might not be obvious in Anat Cohen’s music at the first listening. But then soon “Place and Time” gives over to “The 7th of March,” a song conceived with heavy heart and a gentle eulogy. It is undeniably a dirge that provokes a lump in the throat just as does “Goodbye Porkpie Hat.” There is also a certain warmth and empathy that swathes Cohen for song from faraway Cuba – “Veinte Años.” The   elemental sadness of the inner melody translates almost imperceptably into Jewish folk music. And “Homeland”  contains music that breathes heavily with the unmistakable feeling of “saudades.”

Even in the delightful “Bat-El,” a musical portrait of a childhood friend, the returns to improvised parts at the end of the song, surprisingly, beautifully and most tantalisingly beautiful, you sense a reluctance to let go, until the fade away of the reeds in the wind suggest a complete turnaround.