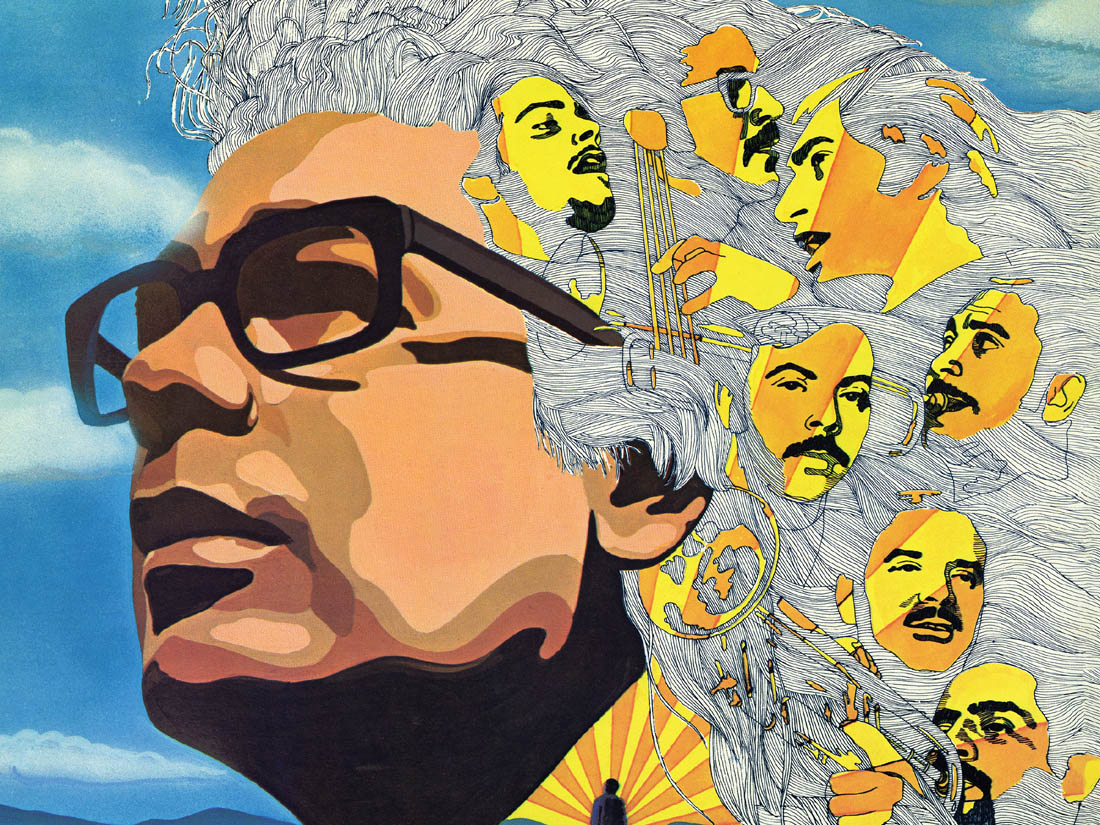 Barretto Power: A Celebratory Reissue on its 50th Anniversary

It was 1970 when Fania Records released Barretto Power, one of a series of seminal albums by master percussionist and bandleader Ray Barretto. 1970, the beginning of an explosive decade in our planet. A decade of crisis and change, especially in New York. A decade of socioeconomic and cultural challenges for a new Latino generation in the Big Apple. Tropical music, the explosion of the so called salsa movement as a unifying phenomenon was gathering momentum, a diverse community searching for identity was embracing their roots in times of challenge. Ray Barretto, a New Yorker from Puerto Rican ancestry [Nuyorican] was redefining again his sound, always open to experimentation and new combinations.

This new edition of Barretto Power boasts all-analog mastering by Kevin Grayat Cohearent Audio and marks the first vinyl reissue since its original release. The 180-grams vinyl has been manufactured at Memphis Record Pressing.

Oye La Noticia [Ray Barretto]: A hard salsa track with an infectious montuno tumbao composed by Mr Barretto. A joy for the dancers. The lyrics talk about envy and jealousy among artists, a theme very much in vogue at that time.

Perla Del Sur [Roberto Rodríguez]: A heartfelt tribute to his beloved Cienfuegos, on this track Mr Rodríguez reminisces about the city where he was born in the island of Cuba, where he grew up and where he started his musical career, at the very young age of twelve.

Right On [Ray Barretto/Louis Cruz]: About this track, I quote drummer, percussionist, bandleader, educator Bobby Sanabria: “…composed by Ray is what best can be described as a rock/funk/boogaloo tune with it’s catchy unison bass and piano figure and its lyrics addressing Ray’s pride in his multi-cultural NYC upbringing. Listen to René’s hip jazz influenced solo over the funky bass line. It exudes Nuyorican soul.”

De Que Te Quejas Tú [Tite Curet Alonso]: Tite Curet, a true boricua born in Guayama, a town located in the southern region of Puerto Rico, composed more than two thousand songs. It’s been said that around 200 of these were hit songs, and about 50 were major salsa hits. I do believe “De Que Te Quejas Tú” is one of those hits. Adalberto Santiago, a natural sonero, proves why he’s one of the best on this up-tempo, very danceable guaracha.

Y Dicen [Tony Fuentes]: This is a composition by bongocero Tony Fuentes. Again, I quote Bobby Sanabria on this track: “…is classic son montuno that addresses the band’s swing and sabor [taste] at a medium tempo. Roberto Rodriguez is featured as he slyly quotes Stormy Weather in his solo.

Quítate La Máscara [Hugo González]: A smash hit in the guaguancó/guaracha style written by Cuban Hugo González, put singer Adalberto Santiago in the international map of greatest Afro-Caribbean singers of his time, and the Ray Barretto Orchestra as one of the greatest salsa bands of all times.

Power [Ray Barretto/Louis Cruz]: The only instrumental piece on the album, “Power” is a funky, jazzy composition where the band has the opportunity to get a bit loose in the descarga style, keeping their cool but eloquently displaying their chops.

Ray Barretto: Congas, Bandleader. Legendary percussionist and bandleader of Puerto Rican ancestry. Throughout his career he played a wide variety of Latin music styles, as well as Latin jazz. His first hit, “El Watusi”, was recorded by his Charanga Moderna in 1962, becoming the most successful pachanga song in the United States. In the late 1960s, Barretto became one of the leading exponents of boogaloo and what would later be known as salsa. Nonetheless, many of Barretto’s recordings would remain rooted in more traditional genres such as son cubano. A master of the descarga [improvised jam session], Barretto was a long-time member of the Fania All-Stars. His success continued into the 1970s with songs such as “Cocinando” and “Indestructible.” His last album for Fania Records, Soy dichoso, was released in 1990. He then formed the New World Spirit jazz ensemble and continued to tour and record until his death in 2006. [Wikipedia]

Adalberto Santiago: Vocals. A living legend, Mr Santiago is widely acclaimed for his distinctive voice, perfectly suited for the salsa genre. His early influences included the great Cuban vocalists Beny Moré and Miguelito Cuní. Santiago started his professional career singing with trios and playing guitar and bass. A member of Ray’s orchestra for six years [1966 to 1972], in 1979 he reunited with Ray on his acclaimed album Rican/Struction. He was also a founding member of The Fania All-Stars.

René López: Trumpet. Born in New York, he was a Jazz and salsa trumpet player of Puerto Rican descent. López recorded several albums with Ray Barretto. He was one of the former members of Barretto’s band who founded the legendary New York salsa band Tipica ’73, an experimental ensemble which blended traditional Caribbean musical elements with songo, jazz and funk.

Joseph “Papy” Román: Trumpet, Trombone. A member of the Ray Barretto Orchestra for many years. Román and Tony Fuentes were in charge of Ray’s orchestra when he retired, becoming the Orquesta Guararé.

Orestes Vilató: Timbales. Cuban percussionist from Camagüey. He has worked as a sideman with Ray Barretto, Johnny Pacheco, Cachao, Fania All-Stars, Santana. He is considered to be one of the foremost timbaleros in Afro-Caribbean music, and a strong musical presence in the San Francisco Bay Area, playing with several groups like John Santos’ Machete Ensemble and Los Kimbos.

[Antonio] Tony Fuentes: Bongó. His musical career began playing in Combo Guayama, by Charlie Rodríguez, who was Johnny Pacheco’s tres player. A couple of years later Willie Rosario invites him to be part of his group, in which he was for some time, also alternating with Johnny Pacheco, Eddie Palmieri and Charlie Palmieri, Willie Colón, Bobby Valentín and Tito Puente. He then joined the Ray Barretto Orchestra in which he remained uninterrupted for 10 years. When Ray Barreto retired, he left the reins of the orchestra to Tony Fuentes and Joseph “Papy” Román, the trumpeter. He then changed the group to be called Orquesta Guararé. [Source: Johnny Torres Rivera – puertadetierra.info]

Andy González: Bass. One of the most respected and well-known bassists in Jazz & Latin music. A native of The Bronx, New York, born in 1951 to parents from the Lares section of Puerto Rico, music was already in his blood. He and his brother Jerry González were founding members of Conjunto Libre and Grupo Folklórico y Experimental Nuevayorquíno, with whom he produced three albums: Concepts in Unity [1975], Lo Dice Todo [1976], and Homenaje a Arsenio [2011]. In 1980, the González brothers would again break new ground with the formation of the Fort Apache Band, arguably one of the most important & influential groups playing what became known as Latin Jazz. González died from pneumonia and complications of diabetes on April 9, 2020. [excerpts from Keith Thomas and Wikipedia]

No doubt we’re living a new era of vinyl revival. It’s now hip and cool to listen to and collect music in the format preferred by serious listeners and audiophiles. There’s also other factors for this revival: the nostalgia for old technology, for vintage stuff that once again is in style. The need to slow down in our crazy lives and immerse in the deep listening experience that only a vinyl album can provide. Hard core and savvy collectors never got rid of their vinyl libraries and sound equipment. Those who unfortunately switched to compact disc and threw away their collections are now rebuilding them, helped by reissues like this one, Barretto Power by master percussionist and bandleader Ray Barretto, which is not only welcome, but make the experience of collecting a tangible piece of musical history very gratifying.

Craft Latino is home to one of the largest and most prestigious collections of Latin music master recordings and compositions in the world. Its rich and storied repertoire includes legendary artists such as Antonio Aguilar, Joan Sebastian, Pepe Aguilar, Celia Cruz, Héctor Lavoe, Willie Colón, Ray Barretto, La Lupe, Rubén Blades and the Fania All Stars, to name just a few. Renowned imprints with catalogs issued under the Craft banner include Musart, Fania, TH, Panart, West Side Latino and Kubaney, among many others. Craft creates thoughtfully curated packages, with a meticulous devotion to quality and a commitment to preservation, ensuring that these recordings endure for new generations to discover. Craft Latino is the Latin repertoire arm of Craft Recordings. For more info, visit CraftRecordings.com.