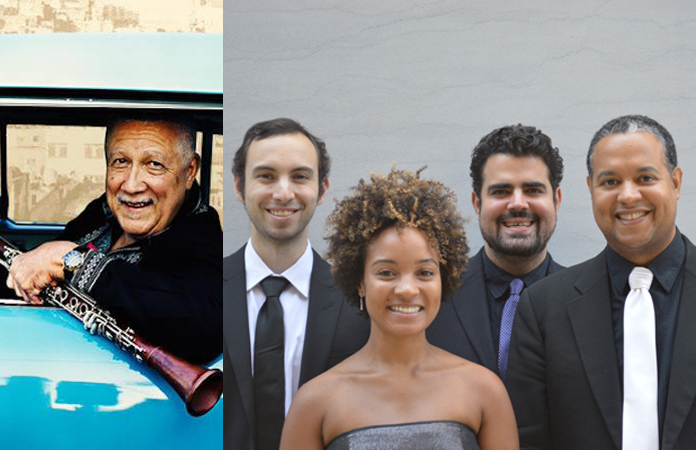 The triumphant journey through music by the inimitable Paquito D’Rivera brought him to Koerner Hall at the Royal Conservatory of Music in Toronto on the 7th of December, 2018. He may not have been with his regular ensemble – including pianist Alex Brown and percussionist Mark Walker, among others – but he was surrounded by the majesty of the Harlem Quartet. The string ensemble comprising violinists Ilmar Gavilán and Melissa White, violist Jaime Amador and cellist Felix Umansky may not be as well-known as some of the other string quartets, but their musicianship is magnificent nonetheless.

The cognoscenti may remember the Harlem Quartet from recordings they made with Chick Corea: Visionary (2014) and they were also featured on Mr Corea Hot House with Gary Burton (2012). They have also made several other recordings including a couple dedicated to music from Duke Ellington to Franz Schubert. Their last one was with clarinetist Eddie Daniels and is entitled Heart of Brazil: A Tribute to Egberto Gismonti (Resonance, 2018) which has been nominated for a 2018 Grammy® Award. How fortuitous then, that they should show up in Toronto for a concert they headlined with Mr D’Rivera.

It has been about fifty years since Paquito D’ Rivera defected from the Communist state of Cuba. He cited the constraints put on his performances of Jazz – considered “imperialist” music – as one of the reasons for leaving his country while on tour in Spain. But a darker memory was also the execution of his cousin by the revolutionary government. In truth the alluring island nation could never have held Mr D’Rivera in its embrace for too long anyway. His heart and his sound world are infinitely larger than anything that the Afro-Caribbean idiom could hold.

But clave and tumbao have bubbled in his blood and boiled over in his own music for decades including during his iconic years with the great Afro-Cuban ensembles such as Orchestra Cubana de Musica Moderna and then, in 1973, the group Irakere; both of which also featured another titan, Chucho Valdés. One of his most famous outings in music was as a member of Dizzy Gillespie’s United Nations Orchestra which left behind one of the finest big band records of all time: Live at the Royal Festival Hall (1989).

The Friday concert at Koerner Hall was more intimate and featured a selection that Mr D’Rivera has written and last played (and recorded) with the flutist Carlos Cano and pianist Hernán Milla on Por La Rivera de Paquito. Of this repertoire the most memorable were his selections – “Habanera” (Part IV) and Contradanza” (Part V) from his magnificent “Suite aires tropicales”. The other works included a magical rendition of “A Farewell Mambo” dedicated to the late great entertainer Guillermo Álvarez Guedes (1927-2013), a bedazzling joropo, “La fleur de cayenne” and an absolutely aching version of “Serenata cubana” dedicated to the legendary Cuban composer, Ignacio Cervantes.

Amid this repertoire – part of the second set – Mr D’Rivera was sublime, weaving his gossamer-like harmonies filled with breathtaking glissandi and combustible arpeggios into the soaring counterpoint created with the Harlem Quartet. The gravitas of Mr Amador’s viola and the often puckish cello of Mr Umansky became the gilded warp to the enchanted weft of the violins of Mr Gavilan and Miss White. It’s true that this was a sort of crescendo to the concert – or more appropriately-speaking, the “cherries” (or “icing”) on the proverbial cake.

However, in many respects the crowning glory may have already taken place during the first set, when the Quartet announced their intent with the ragtime music of William Bolcom, beginning with the spritely “Poltergeist” and then with the “Grateful Ghost Rag”. This was followed with a glowing interpretation of Claude Debussy’s “String Quartet in G Minor, op. 10” of which the Quartet played the second movement “Assez vif et bien rythmé”. Together these works served, as Mr Umansky told (and the Quartet memorably showed) us – the bridge to Jazz.

The absolute pinnacle came as Mr D’Rivera arrived on stage and the musicians launched into Carl Maria von Weber’s “Clarinet Quintet in B flat Major, op. 34”. This clarinet music is arguably the most significant legacy left by the composer which was originally written for Heinrich Bärmann, the brilliant principal clarinettist of the Munich Court Orchestra and who, incidentally, also inspired Mozart. The Quintet is extremely virtuosic and absolutely perfect for the vivid colours and burnished timbre of Mr D’Rivera who performed it to perfection on his legendary oxblood, Luis Rossi clarinet.

Its opening movement alternated between moments of introspection and a rather manic jauntiness. The mournful slow “Fantasia” conformed to the song-like nature of the composer’s slow movements. This was followed by the quirky “Menuetto” and the obligatory “Rondo” finale. It was in this segment that the performance of the Quartet and Mr D’Rivera attained its highest, rarefied realm. Their operatic brilliance and the extreme difficulty of the music were perfectly balanced by the roles of both entities.

The performance of the last “Rondo” movement, in particular, was a sensational battle for supremacy between the strings and clarinet; an altogether breathtaking performance of this incomparable work, so perfect for both the Harlem Quartet and for Paquito D’Rivera who both found a delicate balance between the flashy and the sensitive that Weber’s finest chamber works absolutely demands.