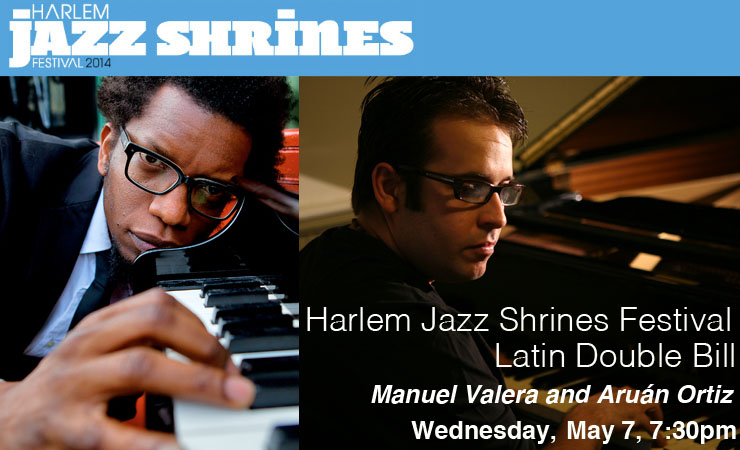 Park Palace Tribute Featuring the Aruán Ortíz Quartet and Manuel Valera & The Cuban Express – May 4th to May 10th, 2014 –

Constructed in 1890 as part of the operations center for the Croton Aqueduct System and withdrawn from commission by the Department of Environmental Protection in 1989, the Harlem Gatehouse is a state-of-the-art home for the arts and one of nine venues celebrating the classic clubs and venues that made Harlem the Jazz Mecca of the 1920’s. On May 7th, I attended the Park Palace Tribute featuring Aruan Ortiz’ Music & Architecture and Manuel Valera’s Versos Sencillos.

Hailed as “the latest Cuban wunderkind to arrive in the United States” by BET Jazz, Aruán Ortíz is a classically trained violist and pianist from Santiago de Cuba. He describes his music as “an architecture of sounds” incorporating contemporary classical music, Afro Cuban rhythms and improvisation as primary material for his compositions. Prior to the performance, I was familiar with Aruán’s work as a side man, particularly with AfroHorn (Francisco Mora Catlett) and his more recent work with flutist, Mark Weinstein (El Cumbanchero and Latin Jazz Underground on the Jazz Heads label).

Accompanied by reed player Don Byron and bassist Rufus Reid (who stood in for Henry Grimes), the music evoked images of mathematical equations, great architectural works and brought to mind the New York loft scene of the 1970s, where free jazz reigned supreme. In some respects, Aruán’s music raises as many questions as it does answers. Is it spontaneous jazz, modern jazz, a new concept? Therein lies the beauty and mystery of Aruán’s music. Ortíz is a recipient of the Doris Duke Impact Award, which is attributed to artists who significantly influence the fields of contemporary jazz, dance, theatre and related interdisciplinary work.

Pianist, composer, bandleader Manuel Valera presented a musical adaptation of the Cuban poet and patriot Jose Marti’s Versos Sencillos. The music is a mixture of Afro-Cuban folkloric music with contemporary harmonies and lyrical melodies and was composed with the members of the New Cuban Express in mind. According to Valera, this is the first time that Marti’s poetry has been adapted to a jazz format. “My only hope is that listening to this music can uplift your spirit – even if just for a moment – how Jose Marti has uplifted and will continue to uplift the spirits of Cubans all over the world for almost a century and a half.” The New Cuban Express is: saxophonist Yosvany Terry, guitarist Tom Guarna, percussionists Ludwig Alfonso and Mauricio Herrera, bassist Hans Glawischnig and guest vocalist Sofia Rei. The evening was a showcase for Valera, the composer and Sofia Rei who showed that she is highly capable of integrating diverse influences with passion and emotion. Versos Sencillos is made possible by a new Works grant from Chamber Music America.

In all, it was a fascinating evening of original music in a unique, historical setting.