“There are only three Afro-Horns in the world. They were forged from a rare metal found only in Africa and South America. No one knows who forged the horns, but the general opinion among musicologists is that it was the Egyptians. One European museum guards an afro-horn. The other is supposed to be somewhere on the West Coast of Mexico, among a tribe of Indians. Probe grew into his from a black peddler who claimed to have traveled a thousand miles just to give to his son.”

Henry Dumas, “Will the Circle Be Unbroken”

Afro Horn MX was one of the most intriguing and underrated recordings of 2012. So it was with great pleasure that I caught up with the band’s 3rd Incarnation at the Jazz Standard’s New Dimensions in Latin Jazz Series.

Afro Horn’s back-story is as spellbinding as its music. The Afro Horn project was conceived by drummer, composer Francisco Mora Catlett in Sun Ra’s home during his tenure with the Arkestra in the late 1970s. Sun Ra introduced Mora to the writings of the African American writer and poet, Henry Dumas and the short story “Will the Circle Be Unbroken.” The legend of the Afro Horns is at the core of the band’s beginnings.

The evening began on a high note and a benediction, administered by master percussionist and poet Roman Díaz from Havana, Cuba who was trained by his elders in the art of classic Afro-Cuban folklore and musical traditions. In short order the band leaped into “Saints at Congo Square,” a tune that pays homage to New Orleans and the Dean of African American Art, Elizabeth Catlett (Mora’s mother) who created the statue of Louis Armstrong that proudly stands in Congo Square today. The tune uses “When the Saints Go Marching In” as a recurring theme and builds to a powerful climax. The tune, “Afra Jum” appears on Mora’s debut recording titled, “Mora!” According to him, “It was born out of the idea of an Afro Jam (Afro Jamming) and the play on words: Afra for Afro and Jum for Joom, Hoodoo, and Voodoo. There is a mystic attraction to the tune, something of the African spirit or the Afro heritage as we know it in the Americas, something really ancient that calls …” The band also tipped its hat to drum legend and mentor Max Roach, who Mora studied and performed with in the percussion ensemble, “M’ Boom.” The remainder of the set showcased Mora’s gift for merging the ancient with the modern. “Wemilere” signifies a bembé or party for the Orishas. The tune is dedicated to “Changó, an Irunmole or celestial being who in terrestrial life was an inter-disciplined Master: a King, a diviner, herbalist, and consummate percussionist with renowned esoteric prowess to communicate directly with the Orisa on the sacred batá drums.” The band closed the musical circle with a musical offering to “Oshún,” “a celestial entity who, in terrestrial form, is the archetype of a beautifully royal woman, who is highly self-reflective and personifies the universal concept of beauty in our realm. Oshún is timeless, ageless and works with hidden masculine acumen with an overtly feminine demeanor.”

A few words about the band, saxophonist Sam Newsome has been praised by jazz writer Nate Chinen of the New York Times for his “outsized command of the horn in the realm of extended technique, such as split-tone multi-phonics, slap-tongue articulation and seamless circular breathing.” Alto saxophonist Bruce Williams has been described as “one of the best young players on the scene” and a “future major league saxophonist.” Bassist, composer, arranger and elder statesman Rufus Reid’s distinctive sound and sonic imprint require no introduction. His sound epitomizes the ever evolving bassist. Master percussionist Roman Díaz is the band’s storyteller, praise singer and musician. Pianist Aruán Ortiz has been described as “one of the most dynamic and talented pianists in jazz today.” His ability to incorporate elements of Afro Cuban music and World Music in the sounds of avant-garde jazz can be heard in his collaborations with Wallace Roney, Terri Lyne Carrington and Greg Osby among others. Mora is a visionary whose music transcends space, time and genre.

I had the pleasure of speaking with Mora between sets, who mentioned the fact that Afro Horn is scheduled to perform at the Detroit Jazz Festival and a new recording is in the works.

Thank you to April Thibeault of AMT Public Relations and the Jazz Standard, a venue that prides itself on presenting the legendary artists of today and the brightest stars of tomorrow in a comfortable, congenial and acoustically perfect atmosphere. Additional thanks to Babalawo, Spiritual Counselor, Mentor, Educator and Musician, Antonio Mondesire for his guidance. 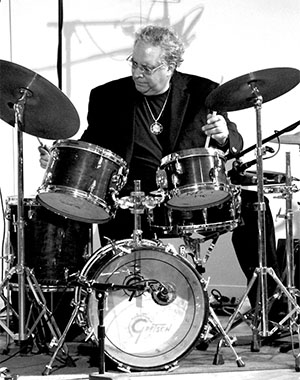