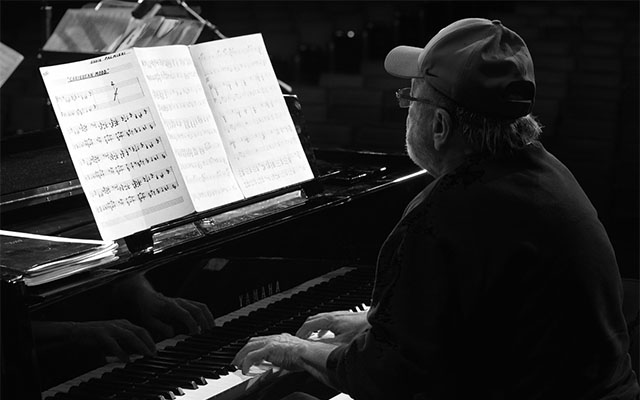 “We’re talking about one of the great figures in American vernacular music, a multifaceted world-class musician who blends and zigzags between cultures, between the modern and the ancient, going past all boundaries.”
— Professor Robert Farris Thompson

Just prior to the show, Artistic Director Brian Lynch talked about Palmieri’s long and storied career, his “secret” relationship with jazz and the evolution of the Octet, which brings together the Afro-Caribbean dance form and the instrumental jazz form without compromising either.

Before laying his hands on the keys, Palmieri gave the audience a brief dissertation on the evolution of Afro-Caribbean music (a broad term for musical styles originating in the Caribbean from the African diaspora) and proclaimed, “The drum is the pulse of my life!”

The repertoire was a cross section of tunes from the Octet’s songbook that are rarely played live. Tunes such as, Crew, Definitely In, Doña Tere, Caribbean Mood, Doctor Duck, Palmas, the majority from three classic recordings that marked a critical juncture in Palmieri’s music: “Palmas” (1994), “Arete” (1995) and “Vortex” (1996) aka “the trilogy”.

I’ve been listening to Palmieri’s music for years and had the pleasure of seeing him perform in every setting imaginable but this was a rare opportunity to see the artist who revolutionized Latin music perform rarely played material in a jazz format. Palmieri’s natural inclination is to play free. Moreover, he solos like a drummer but at the Y he stuck to the charts. His playing was structured and restrained with occasional bursts of modern jazz chords, swinging tumbaos and dissonance.

Brian Lynch sums the series up in the program notes: “It’s fitting that 92Y, one of New York City’s most iconic cultural institutions is presenting music that, while diverse in its sources, is truly “made in New York.”

Kudos to the 92nd Street Y and Artistic Director Brian Lynch for the forward thinking series. I hope to see it evolve into a yearly event.