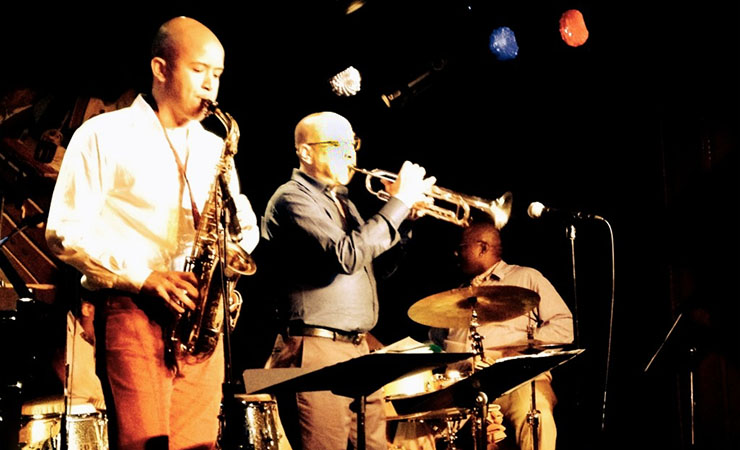 Spheres of Influence, led by Grammy Award-winning trumpeter, composer Brian Lynch – best known for his work with Art Blakey and his collaborations with Eddie Palmieri – held court at a sold out house at Minton’s in Harlem last Tuesday, July 22, 2014 as part of Jazz at the Crossroads – The Dance of Elegguá.

The Tuesday night series, running since May, has been a subtle and complex tribute to Latin jazz greats Mario Bauzá and Mario Rivera, via concerts presenting the myriad aspects of their work “at the crossroads” – the thrilling intersection of Latin music and American jazz that blossomed from the 1930s through the ’60s. Curator Dita Sullivan picked trumpeter Jack Walrath to represent Dizzy Gillespie in a June show – she chose Lynch, who she knew from his days as a sideman with Hector Lavoe’s band, to represent trumpeter and bandleader Mario Bauzá himself. “Mario Bauzá is the architect of Latin jazz,” Sullivan says. “He is to the music what Frank Lloyd Wright is to buildings.”

Mario Bauzá would have been pleased with her choice of Lynch. Indeed, during a recent interview with Cultural Oyster, Lynch demonstrated that he understands the intersection of Jazz and Afro-Caribbean music: “Bebop is the consummate technique of having an intimate relation with the musical terrain of time and space, the ability to control it moment by moment, but not planning it out in advance,” says Lynch, “That intimate relationship with what you’re playing that the bebop masters had – great rumberos have it too. When you listen to the Muñequitos de Matanzas, when you see what the quinto [the little, high-pitched drum] player does – that’s what a great bebop trumpet player does.”

“Brian Lynch has just the most beautiful tone of anyone alive,” Sullivan says. No one can match the pure criollo flavor of his sound – except for the great Santiaguero trumpeter, Pachu (Feliciano Gómez) – and no one has his anything like his vision, except for Jack Walrath. I’d love to put them in concert together – all three of them. It would be a hundred times more exciting than the Three Tenors.”

On a larger scale, the music and the series represents a renaissance of New York jazz that’s being created by musicians and composers from Latin America; a movement that, according to Sullivan, “has been ignored to the point of suppression.” By all accounts Jazz at the Crossroads is more than “just” a music series, it’s a concept with a sense of history and unwavering respect for Jazz and Afro-Caribbean music, its founders and the artists who continue to perpetuate the genre.

Stay tuned for breaking news regarding Jazz at the Crossroads – The Dance of Elleguá. To be continued …