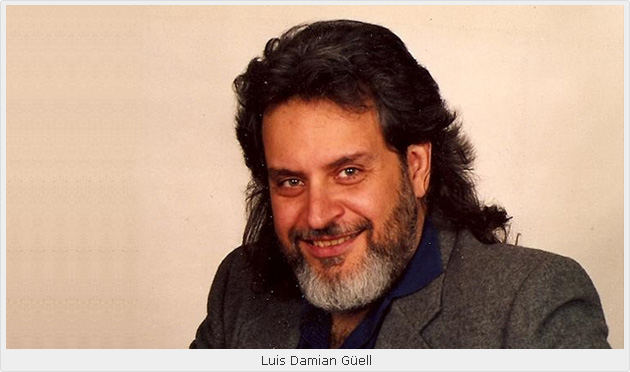 Luis Damian Güell was born on September 28th, 1953 in the provincial city of Cienfuegos, in Cuba, where he attended the Marist Primary School between 1958 and 1960. The Marist Brothers are a Catholic religious order of brothers and affiliated lay people. The order was founded in France, at La Valla-en-Gier near Lyon in 1817 by Saint Marcellin Champagnat, a young French priest of the Society of Mary (Marist Fathers).

After leaving Cuba with his family, young Luis continued his studies at the Marist Primary School in Madrid, Castile, Spain between 1965 and 1968. Eventually his family settled in Hudson County, in northern New Jersey, where he attended Memorial High school in the town of West New York from 1968 to 1972. He was a mere stone’s throw away from the capital of the music business, New York, and his eye was on the apple.

Recently, Luis brought me up to date on his formative years in the recording industry.

"After graduating high school, I enrolled in the Manhattan School of Music in nearby New York City, where I studied composition, electronic music and recording arts and science with the renowned Fred Plaut, then Senior Engineer for the Masterworks Dept. at The Columbia Records 30th Street Studio in New York. This was the same studio where seminal figures such as Bob Dylan, Johnny Cash, Billie Holiday, Tony Bennett, Miles Davis, Mongo Santamaría, Muhammad Ali, and Charles Mingus had recorded their best work".

For anyone who is not familiar with the analog recording industry in its heyday, the 30th Street Studio was located at 207 East 30th Street, between 2nd and 3rd Avenues in Manhattan. It was originally an Armenian Greek Orthodox church. Abandoned after the war, the church was transformed in 1949 into one of the world’s greatest recording studios, where some of the most dynamic and enduring music was created. Bob Dylan’s "Highway 61 Revisited"; Leonard Bernstein’s "West Side Story,"; Miles Davis’s "Kind Of Blue" and Glenn Gould’s interpretations of Bach’s "Goldberg Variations," were all recorded there.

Under Plaut’s supervision, Luis Güell interned as his assistant at the 30th Street Studio from 1972 to 1974. The studio provided a distinctive ambience, featuring a kaleidoscope of sublime sonic qualities unparalleled in the recording industry. Young Luis soon found himself in the company of masters. His first session as an intern was with Leonard Bernstein playing the piano and conducting the Columbia Symphony Orchestra. It turns out that the aforementioned recording was the classic Gershwin tune "Rhapsody in Blue". Luis was only 19 years old at the time.

He fondly recalls: "I nearly died when I had to ask Bernstein to please play the piano so I could mic it. At that time 30th Street Studios only recorded classical and jazz with some Broadway shows cast albums sprinkled in between. I do not remember any pop, folk or country being recorded there, those sessions were usually recorded at the 52nd Street Studios. Needless to say, I was in heaven".

From ‘74 to ’77 Luis worked closely with C/O Banner Talent in New York, serving as liaison to Latin American booking agencies and clients, creating both musical and vocal arrangements, supervising road and sound crews, and serving as bassist and musical director for the touring group which backed The Shangri-Las (Leader Of The Pack, Walking in The Sand, Give Him A Great Big Kiss, etc.).

In March of 1978 he designed and became the co-owner of A Step Above Studios, which was located at 281 5th Avenue in Manhattan. He worked there until ’85 as studio manager, engineer and producer, supervising staff, handling bookings, promotion, production and recording of music and commercial spots (jingles) for radio and television. He served as the account executive for all the Spanish and French speaking Latin American and European clients.

"It was a time of great creativity and fusion for the Afro-Cuban sound. As I remember it, that’s when I recorded Orlando ‘Puntilla’ Rios’ album ‘From La Habana to New York’, as well as an unreleased album titled ‘Cuban Commandos’ that featured among others, Puntilla, Olufemí, and the newly arrived Paquito D’Rivera. Many disco era and very early rap projects were recorded there as well. But as fate would have it, I felt the need to move on, so in early 1985 I began an association with Sight & Sound Management Ltd., located at 156 W. 57th Street. They later moved to 200 5th Avenue. It was run by Bob Schwaid, who managed such artists as Miriam Makeba, Van Morrison (he produced ‘Astral Weeks’ for him), Al Green, Evelyn ‘Champane’ King, the SOS Band and many others. Bob would later become a partner and president at World Beat Records. He died in 2002 and is greatly missed by all of us who worked with him. My association with Bob really opened me up to new ideas, as well as giving me a unique insight into the business side of the recording industry."

For the next two years Luis labored arduously at Sight & Sound as staff producer and personal manager for various artists in music, television and cinema. By 1986 he had already produced Mick Wilson for RCA Records (London) and several singles for Man Eating Plants. During this period he continued to work with Latin American and European clients as well, freelancing from ’72 to ’86 as a bassist, mostly in Manhattan, with the Dan Early Trio, John Adamo, and groups such as Turn Down Broadway, Adobo and Palma.

In 1987 he joined the staff at Ultrasonic Recording in West New York, New Jersey as chief engineer and studio manager. "The Penthouse", as it was known, soon became the recording mecca for many recording artists from the Hudson County area. Luis would stay there until 1996, doing music and sound recording, basic maintenance and trouble shooting of equipment, while also supervising staff and freelance engineers. While at Ultrasonic, he received both Gold and Platinum Record awards from WEA Caribe for his engineering work on the Frankie Negrón debut CD “Con Amor Se Gana”. He worked out of this studio for a good part of the decade.

By 1992 Luis was supervising all areas of production and engineering of “The Meme Solís Show" for NPR’s Radio Martí, preparing material for broadcast into Cuba. He then opened up his own studio, Digital Boulevard Audio in West New York, New Jersey, where he took on the task of handling all phases of production, from recording to manufacturing, including: liner notes, artwork, graphics, printing, coordinating promotion, advertising and distribution departments for World Beat Records, a Jazz and World Music record company that unfortunately went out of business in 2001.

He remembers it as a time of growth: "Digital Boulevard Audio was actually created in ’92 as an editing and mastering facility for Ultrasonic . At that time it was located at "The Harbor Towers", also on Boulevard East before moving to its current location in Fairview, N.J. in ’99. We started producing Meme’s show in the early 90’s at The Penthouse and then moved it to Digital Boulevard’s studio after Ultrasonic closed. The industry was growing and changing, and I was growing and changing right along with it. And there certainly was a lot of teamwork involved back then. I was part of the team that designed and built Ultrasonic’s Penthouse Studio and I’m really proud of that".

Currently he is putting the finishing touches on an album for noted Cuban songwriter Cheín Garcia, who in the past has written music for Enrique Iglesias, Carlos Santana, Lara Fabian and Frankie Ruiz. There is also a live album for Puerto Rican pop singer Brendaly that is nearing completion. Both Chein’s and Brendaly’s Albums are due to be released shortly.
Luis’ expertise includes the art of mastering, which is what he is best noted for these days.

Basically, mastering is the shaping, sculpting, equalizing, compressing and fine tuning of sound through both analog and digital audio processing. In Luis’ capable hands each individual track in a production is given depth, punch, clarity and volume. It is more than just a science, it involves a certain craft, and of course a keen ear for the music. Most technicians involved in audio engineering and mastering are musicians, or at least musically inclined. It is an art that is widely misunderstood and sometimes even mistaken for mixing. It’s the last step which comes just before the manufacturing of a recording. It’s a crucial step for many. For Luis, it’s the pièce de résistance. He is currently mastering "Casino Rueda" for latin singer Luisito Rosario, as well as Willy Torres’ NYC Salsa Project. It is the second album that he has mastered for this upcoming artist.

Recently, I asked Luis Güell if there were any other new and interesting projects in the works.

"I’m currently working on editing, mixing and mastering of a formidable live concert by ‘Grupo Folklorico y Experimental de Nueva York’. It was produced by René López, who was also responsible for the quintessential groundbreaking New York Afro-Latino folkloric project, known by the same name, back in the early seventies. The music for this new version will be part of the soundtrack for an upcoming documentary. Also, I have recently recorded ‘Don Pancho Terry’ for Chembo Corniel’s next album. As far as Digital Boulevard is concerned, we have just concluded major acoustic and equipment upgrades this past April, including Lipinski L707 monitors and a Rupert Neve designed ‘Masterpiece Analog Mastering Unit’ with ‘Lavry’ converters. I’m really excited about this, as I now have at my disposal the type of state of the art technology that is needed in order to continue helping out independent artists like Raphael Cruz, Miguel García and Ochún and David Oquendo".

With all these achievements under his belt, we at Latinjazznet.com would like to wish Mr. Luis Damian Güell the best of luck in all of his future endeavors and we sincerely hope that you, our readers, have enjoyed our reportage on "the man behind the sound".