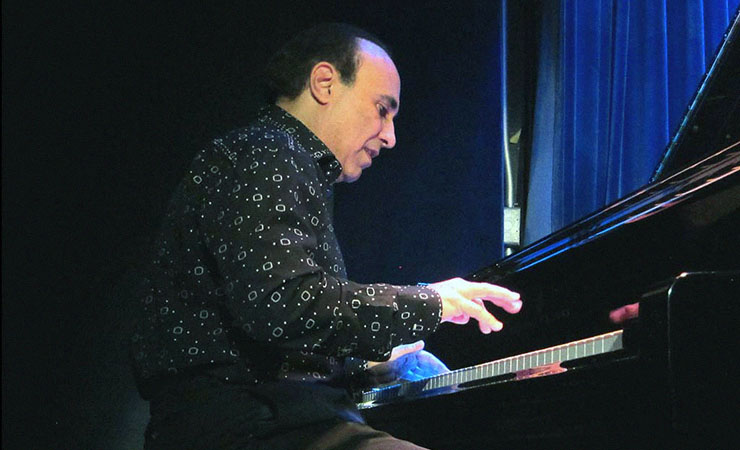 Mr. Camilo is also assisted by a second trio: Lincoln Goines on bass and his earliest drummer, Joel Rosenblatt. Both bassist and drummer add a forthright rhythm section to Michel Camilo’s music here, quite different to the gentility of the rhythmic partnership of Mr. Weckl and Mr. Johnson. But before the music with this trio takes centre stage, there is the rollicking energy of “Crossroads” that Mr. Camilo immerses himself into with unbelievable abandon. The speed of his playing makes the quixotic composition extremely enjoyable. This is followed by a moody and flighty interlude to Mr. Camilo’s suite, “Sunset (Interlude/Suite Sandrine).” Playing solo exposes Mr. Camilo’s soul and his playing is unabashed here. HIS unbridled ingenuity for creating a myriad of moods and also some brazen colours is quite evident early on in his career and this chart is a classic example of this breathtaking playing. Mr. Camilo plays his heart out on “Sunset” and, having squeezed the melancholy out of his soul, refreshed the rest of the album with some rollicking Caribbean rhythms. The sassy “Yarey” is followed by a roistering tribute to the ubiquitous Brazilian vocalist and ingenious pianist, Tania-Maria. Played as a bossa-nova chart that swaggers in and out of a marcha, “Pra Voce” is an exquisite chart played in the grand manner that Tania-Maria herself might play one of her own pieces. More than showing Mr. Camilo’s ability to play in a Brasilian vein, he displays another side to him; one that adores anything Latin American—especially Brasilian. And, then of course there is his spectacular version of “Blue Bossa,” something he shares with the great Mongo Santamaria. 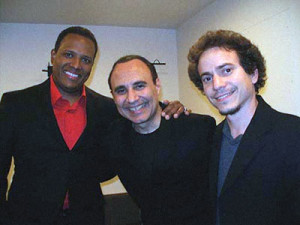 Michel Camilo’s regular trio had not yet begun to take shape. For some time, while he was still getting his feet wet he relied on Dave Weckl and Joel Rosenblatt on drums, and Lincoln Goines and Marc Johnson. He then graduated towards Anthony Jackson on bass, and after much gadding about, settled on Horacio “El Negro” Hernández on drums. However there were times that Mr. Camilo’s restless spirit caused even him to wander. Horacio Hernández was occasionally substituted by another fine Cuban drummer, Dafnis Prieto and Mr. Jackson made way for the elegance and passion of the fine bassist, Charles Flores. On Mano a Mano Mr. Camilo throws himself an additional curve ball and uses neither drummers, but brings in the ingenious percussion colourist, Giovanni Hidalgo, a musician’s musician, who creates multi-dimensional rhythm; the other dimensions being melodic rhythm and harmonic rhythm, something few—if at all—conga players had mastered to the extent that Mr. Hidalgo had mastered. On Mano a Mano for instance, Mr. Hidalgo’s music goes beyond the pale. His ingenuity and intellect is purely musical; he plays with a certain insouciant mastery on “Then and Now,” a hauntingly beautiful chart that finds Mr. Camilo constantly probing the notes and poking around the chords as if he were going back and forth between the milestones of his career so far. The music begins with a melancholic sequence played con arco by Charles Flores; a melody so powerful that it immediately puts an arresting vision on the piece. By the time that Mr. Camilo begins taking a stab at the melody, his eyes shut and his mind roaming freely between worlds, Mr. Hidalgo has brought a palette of many colours to bear on the underbelly of Mr. Flores’ bass line. Worrisome feelings give way to a certain calm as the depth of emotions increase and as if piloting a hermetically sealed ship, Mr. Camilo gradually guides his players on another challenge: that of reconciling the past with the present and therefore with the future. In the now, the music seems to be saying, they must reconcile the then. 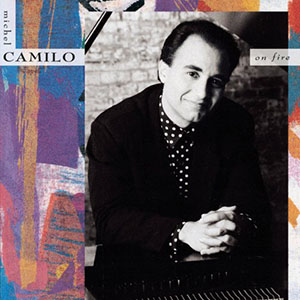 In 1989, Michel Camilo was assigned to the Epic/Portrait label. Fresh from the roaring CBS debut of Michel Camilo he brought together two trios—an older and a newer one and released On Fire. It is almost certain that this was puckish behaviour on the part of the pianist, who, with typical impish island humour had found a perfect title for his album. Mr. Camilo was in sublime command of the piano, but something seemed lost and not found yet: wrestling for a perfect balance between the old and the new. THE pianist does appear to be living and dreaming in a musical continuum that seems to have no beginning and no end. Why else is there is continuity from record to record with personnel. And now the beautiful “Suite Sandrine” carries over from Michel Camilo; a gorgeous, lilting beginning to connect with the Suite from the earlier recording, followed by Mr. Camilo’s delightful path down a virtuosity-driven pianistic sojourn where elves and fairies dance and prance in the spectral place that Michel Camilo seems to have discovered. Even the Spanish Baile executed with exceptional grace and fire by Raul echoes with the duende of depth of the soul as Mr. Camilo is sucked into that vortex that develops as the song spins almost desperately and barely in control. 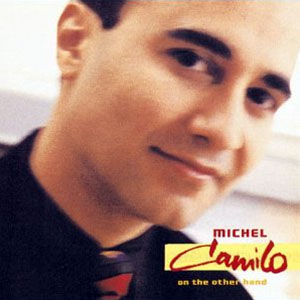 If November of 1988 marked his debut on a major record label with the release of his self-titled album, Michel Camilo then much more was to follow and Mr. Camilo probably knew it. His career was picking up momentum. If the first CBS/Sony album became an instant success and held the top jazz album spot for ten consecutive weeks this next recording fared even better. On Fire was voted one of the top three Jazz Albums of the Year by Billboard, and 1990s. His next album, On the Other Hand was also a top-ten jazz album. All three releases reached the number-one position in radio airplay. Camilo’s list of compositions, recordings and other achievements throughout the ’90s started to increase in number. HIS reputation for piano repertoire became legion; his repertoire also became vast. His composition, “Caribe” was recorded by the French pianists Katia and Marielle Labèque, and was also recorded by the legendary Dizzy Gillespie, in 1991. His “Rhapsody for Two Pianos and Orchestra,” commissioned by the Philharmonia Orchestra, had its ecstatic premiere a year later at the Royal Festival Hall. In 1993, Gavin and Billboard magazines picked his Rendezvous as one of the top jazz albums of the year. “Softly as in a Morning 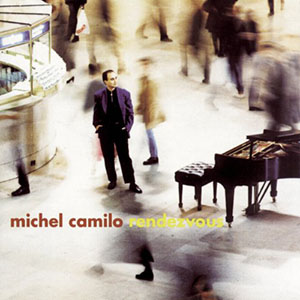 Sunrise” sets the stage for his complete transformation from a pianist in search of a past to a musician with a gloriously written future. His virtuoso handling of the merengue “On Fire” is an astounding creation and certainly one of Michel Camilo’s most beautiful musical pieces. It continues, musically, from where music such as “Crossroads” left off. But the true taste of Mr. Camilo’s genius is when his magical virtuosity shines in such exquisite and moody almost elementally melancholic pieces such as “In Love.” It is almost as if Michel Camilo is playing without a net, oblivious to the perils of ecstatic pianism, yet forsaking nothing in terms of superior musical intelligence for raw emotion. Much of this shines through in this album and as Mr. Camilo crosses between Latin inflections and his urge to play in a more elastic idiom without making any specific idiomatic reference. Suddenly lines blur and although Mr. Camilo may sometime state the obvious, his ingenuity is felt in his ability to “live” in between the rhythmic metaphors that remind him of home—meaning Santo Domingo—and of New York, which city his heart now beats for. Weaving a tapestry that transitions from “If You Knew…” to “Uptown Manhattan” and between “In Love” and “This Way Out” becomes a route that Michel Camilo deliberately takes as he makes steady progress to where he is destined to go musically and emotionally.