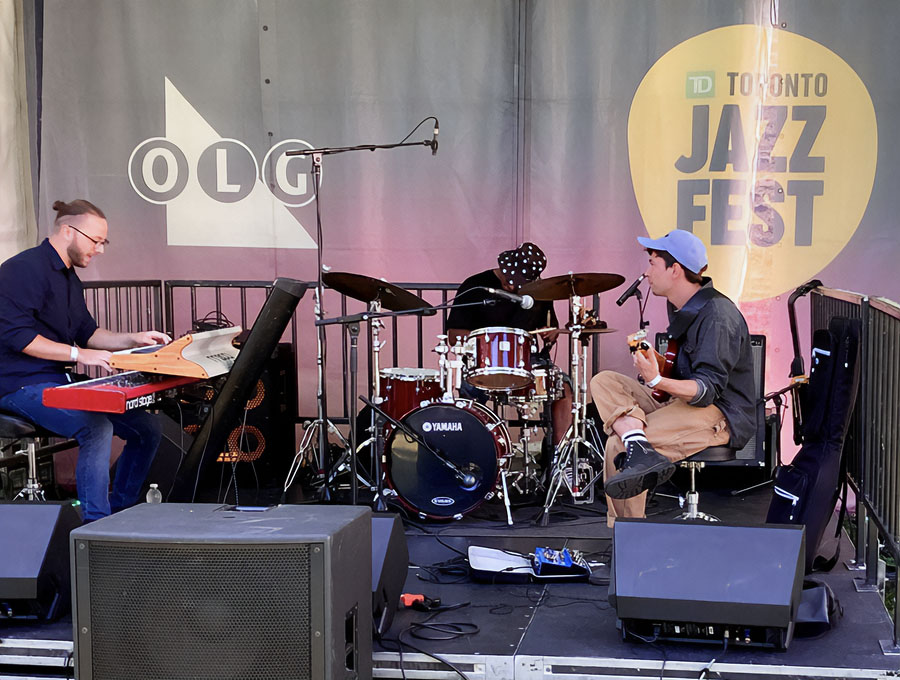 My TD Toronto Jazz Festival started mid festival, Tuesday, June 28th, early evening. It was all about Juno winners and nominees. The first act, Sammy Jackson and her quartet performing at the TD Main Stage at the OLG Grove.

Sammy Jackson won a Juno for vocal jazz album of the year. Her band, made up of Jackson on Vocals, Thomas Fleming – guitar, Chris Pruden – keys, Mark Godfrey – bass and Ian Wright playing the drums. Jackson sang songs from her award winning 5-track EP With You, featuring original compositions. Sammy Jackson added some songs from her 2016 release, the 5-track EP Take Me Back, to make for an enjoyable hour long performance. Jackson’s songs are about joy, vulnerability, long distance relationships, and love. Jackson blends jazz, R&B, soul and pop with her beautiful voice.

Jackson covers an impressive vocal range, and her phrasing is delightful. Jackson shines on the ballads. I especially enjoyed “Bad Reception” and “Every Time We Say Goodbye”.

Sammy Jackson concluded her show with one dedicated to her son, entitled “Chuckie”, a toddler who happened to be in the audience and made a cameo at the front of the stage. This tune was upbeat and had a happy go lucky, dance groove to get everybody moving.

I spoke with Jackson after the show, I asked her if she noticed the Juno enhancing her career? She said, “I think it’s why I’m here. The Juno increased my exposure. So that’s great. Thank you Juno!”

Kellylee Evans performed the evening of the 28th and I was not going to miss her concert at the TD Main Stage. Kellylee Evans was in great vocal form and in accompaniment with a wonderful band made up of Joel Visentin – keyboards, Mark Godfrey – bass, Rich Grossman – guitar, and Ian Wright on drums.

Evans has suffered some serious physical setbacks in her recovery from a tragic accident in 2013. She has an injury that is effecting her ability to walk and even to stand. She performed the show from a sitting position.

This evening, Evans performed songs from her new 5-song EP Green Light as well as many others. A beautiful, dynamic, high energy performance—even from her seated position.

I started off Wednesday, the 29th with the amazing trumpet playing of Alexis Baró. The Alexis Baró Quintet was performing at the TD Stage at Festival Village in Yorkville.

I really enjoy Baró’s trumpet playing. I think he is one of the most expressive players in the Afro Cuban style. Baró performed songs from his new album Ma Raiz.

I only stuck around for a few of the songs as Joy Lapps and Larnell Lewis were performing at the TD Main Stage at the OLG Grove, a few streets south. It is most unfortunate to have these scheduling conflicts. However, It is amazing to have so much talent at one festival.

“Rejoice” was the title of one of the songs performed and to hear this band is to rejoice. When I listen to Larnell Lewis play I feel the pulse through my soul. I think this is the most heartful drummer I have ever heard. His music is uplifting, powerful, dynamic, his beats, fills and rhythms, just outstanding. He shares his heart with the audience, nothing is left on the stage.

Now to get ready for a return to Koerner Hall, after 2 years of isolation, for one of the few ticketed events, the Gregory Porter band. Excited? Yes, indeed! 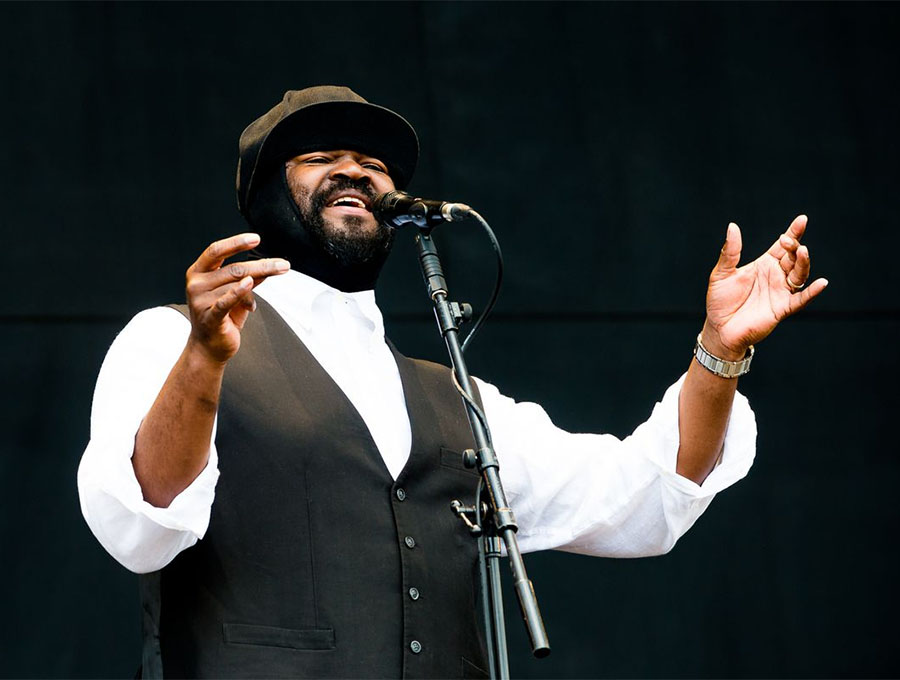 My first time back in Koerner Hall in over 2 years and the Gregory Porter band set to perform for me and a sold out audience of festival goers. The band for this performance, Chip Crawford – piano, Emanuel Harrold – drums, Jahmal Nichols – bass, Ondrej Pivoc – Hammond organ, Scooter Brown, alto saxophone.

I have always thought of Gregory Porter as a provider of soulful, spiritual music. The addition of Ondrej Pivoc on the Hammond organ put this performance into the realm of church music with Gregory Porter preaching the gospel of love and peace.

Opening the concert with “Painted on Canvas” Porter sounded in good form, along with the band, who sounded wonderful. The band took to the stage first with Porter following behind moments later and receiving a thunderous applause on taking the stage. The band dug deep and offered up joyous musical backing. They followed that spiritual with “If Love is Overrated” and that set the tone for this musical genius to put on a spectacular show.

Gregory Porter and the band played some of my favourite tunes, including “Liquid Spirit”, “Take Me To The Alley”, “Musical Genocide”, “Hey Laura” and “There Will Be No Love”.

The band lets loose on “Musical Genocide” and I thought the interplay between piano and drums was exceptional. Jahmal Nichols has his moment on this tune as well, he had a smile on his face throughout the concert, on “Musical Genocide” he is in the zone and obviously enjoying the spotlight.

Gregory Porter spoke of loss, love and water under bridges, the audience listened and in some cases responded, offering heartfelt sympathy for Porter’s loss of his brother during the early part of the Pandemic.

Gregory invited the audience to join his band for the encore tune “You Can Join My Band” and the audience did their part by singing along.

A wonderful concert, a spiritual performance and a beautiful way to cap off my 2022 Toronto Jazz Festival.