“Hilario Durán is an unparalleled pianist, as well as being a composer and arranger of the first order… one of the greatest Cuban pianists of the 20th century”. — Chucho Valdés

Hilario Duran And His Latin Jazz Big Band will perform a free concert at the Toronto Star Stage at Nathan Phillips Square on Thursday, June 27 at 12:30 pm. 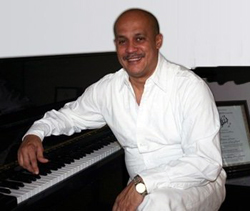 Cuban Canadian Pianist, Composer, Arranger, Bandleader and Educator Hilario Durán is one of the world’s most innovative creators of Afro Cuban music & Latin Jazz.  Hilario Durán is ranked among the greats, as one of the most important contemporary Cuban pianists and arrangers today. In 2005, Hilario formed his explosive Big Band Orchestra with top Canadian and Cuban musicians in Toronto. The album, “From The Heart”, featuring Paquito D’Rivera, was nominated for a Grammy in 2007, and won a Contemporary Jazz Album of the Year Juno Award.

·  Won two JUNO and over a dozen National Jazz Awards in Canada.

·  Honoured with prestigious 2007 Chico O’Farrill lifetime achievement award in Miami for his outstanding contributions to Afro-Cuban jazz and Latin Jazz. Awarded “Premio EGREM” for Best Arranger of the Year 1982-83—one of Cuba’s most prestigious music prizes.

·  Performed with and studied composition and arranging at Amadeo Roldan conservatory and under the musical directors of some of Havana’s great cabaret and theatre orchestras.