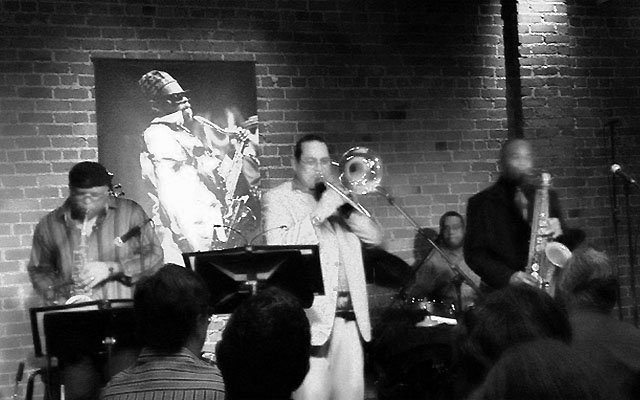 RAHSAANATHON: A Celebration of the Life & Music of Rahsaan Roland Kirk 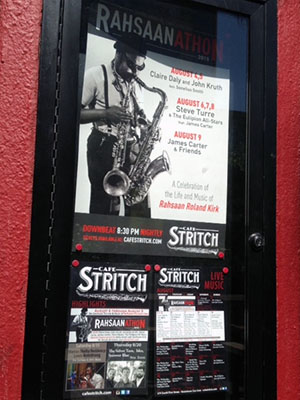 Saw Steve Turre and the Eulipion All-Stars at *Cafe Stritch, where they celebrated the life and music of the late, great Rahsaan Roland Kirk.

In a set that lasted nearly two hours, the group performed selections from Rahsaan’s repertoire with a sense of reverence and swing.

The word, Eulipion, refers to what Kirk called, “Agents of Change” – Poets, painters, musicians, writers and artists who changed the world.

On hand was Betty H. Neal, whose spoken word intro can be heard on the tune, Theme for The Eulipions: “You wouldn’t forget him either if you met im where i met him talkin about desolation desolation isi sraliorad station round about a 2am on week night you walk into desolation like that and suddenly out of nowhere comes a warm song you aren’t about to forget it thisis the first ime i’ve heard him at the airport i know he moves along th epiers he calls himself a journey agent a eulipion syas hi freinds the poets and the artists adn the musicians are eulipions too listen to his tune he calls it the duty free gift for the traveller.”

Also on hand was Dorthaan Kirk, Rahsaan Roland Kirk alumni and Steve Turre, who joined Kirk’s band when he was an up and coming trombonist, “Trying to figure things out.” 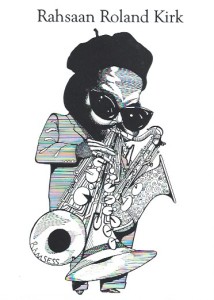 Kirk was an American jazz multi-instrumentalist who played tenor saxophone, flute and many other instruments. He was renowned for his onstage vitality, during which virtuoso improvisation was accompanied by comic banter, political ranting, and the ability to play several instruments simultaneously.

He was also an innovator and a  formidable composer, as evidenced by the band’s interpretations of Bright Moments, Serenade to a Cuckoo and Dorthaan’s Walk among others.