“Closing the night and the Fest, the honoree, trombonist and composer William Cepeda, filled the stage with the joy and power of his music and a true big band of master musicians. Cepeda is always creating, and looking for new ways to express himself.”

The twentieth third edition of the Puerto Rico Heineken JazzFest was dedicated to one of the most creative musicians in Puerto Rico, trombonist, composer, educator, and advocate of Puerto Rican traditions, William Cepeda. A true music genius, Cepeda is a pioneer in the fusion of Jazz with Puerto Rican folk music, especially with the rhythms of Bomba and Plena, a fusion he calls AfroRican Jazz. 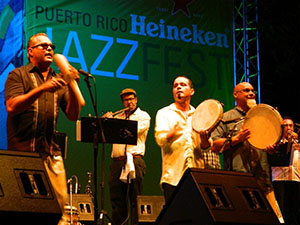 The first night opened with the music of Viento de Agua, a group that perfectly fits the folkloric music vision of William Cepeda and the theme of the fest. Founded in New York in 1997 by percussionist and singer Tito Matos and saxophonist Ricardo Pons, the music of Viento de Agua is a blend of Puerto Rican folk music with Jazz and other influences. Viento de Agua started with the contagious rhythms of Plena in the songs “Fiesta de Plena”, “La Reina mia“, “Lola” and the modern arrangement with Peruvian influences of “El que no tiene de dinga”. Excellent improvisations by Eliud Cintrón on the trombone and Roberto Calderón on the saxophone were the highlights of these first pieces.

In the song “Plena Azul”, a Ricardo Pons composition, the fusion of Plena with Jazz and Blues can be heard more clearly. Eliud Cintrón adds another excellent improvisation on this one. Next, the rhythms of Bomba filled the stage with “Cu Cu”, a song by one of the masters of the Bomba tradition, Rafael Cepeda. The beautiful and powerful voice of Kiani Medina closed Viento de Agua’s presentation with the Plena “Ciudadano del Mundo”. 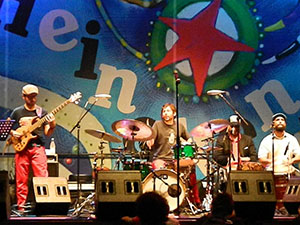 Continuing in the fusion mood, Henry Cole Afro Beat Collective took the stage with a mix of Bomba, Plena, Cuban rhythms, Jazz, funk, rock, hip hop and more. Psychedelic sounds on the Fender Rhodes over Bomba rhythms were the intro for the first piece, “Uncovered Fears“.  The Plena rhythms came back to the stage in the song “Solo dos veces“, with Killy Vializ on voice and the dancers Lourdes Gandía and Charma Avilés.

The next two songs ”No eres tú, soy yo” (It’s not you, it’s me) and “Trabajala” (Work it out) included the urban, hip hop poetry of Hermes Ayala, both ended with some funk/fusion. In “To living without seeing” was the turn for Cole to shine on drums with a nice intro, and rock influences on this and the last one. Besides Cole display of his amazing technique, Billy Carrión Jr. on baritone sax impressed the public with masterful solos and passionate playing. 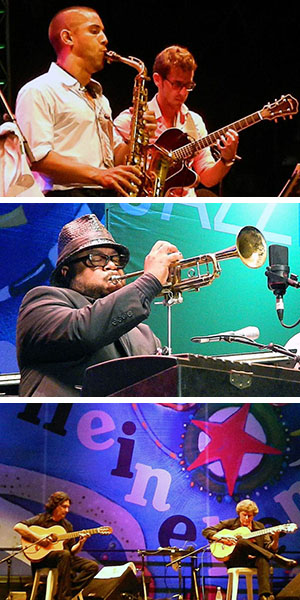 The rain almost ruined the debut of one of the young promises of Puerto Rican Jazz, alto saxophonist Jonathan Suazo. Fortunately, the rain went away and people enjoyed the artistry, and virtuosity of Suazo and his Quintet, pianist Eduardo Zayas, guitarist Gabriel Vicéns, bassist Alex Gasser and drummer Leonardo Osuna. Remember these names as they are the future of jazz in and out of Puerto Rico.

All the outstanding compositions played by Suazo Quintet, the energetic “Pace of Life”, the bolero and bomba fusion of “La ira de una flor”, the soulful “Lucharemos Juntos” (dedicated to Suazo father) and the samba “The Joy of You” were originals, except for Cole Porter “What is this thing called love?”.  Percussionists Jhanlee Aponte Poro, Amarilys Ríos, Branlee Mejías and Paoli Mejías joined the quintet for the Latin jazz arrangement of the Cole Porter classic tune.

The second act on Friday night was one of the Jazz true masters in recent years, trumpet virtuoso Nicholas Payton. Accompanying Payton on stage were bassist Vicente Archer and drummer Marcus Gilmore.

As a native of New Orleans, where Jazz was born, Payton music is a real gumbo of modern jazz, funk, fusion, bebop, cool jazz, traditional jazz and everything in between. One can hear on Payton virtuosic improvisations the voices of Freddie Keppard, Louis Armstrong, Miles Davis, Freddie Hubbard, Clifford Brown and all the great trumpet players in the history of jazz.

The guitar duo of Strunz & Farah closed the Friday night presentations of the Puerto Rico Heineken Jazz Fest. Jorge Strunz from Costa Rica and Ardeshir Farah from Iran are not new to Puerto Rico and the Fest, they played on this same stage 12 years ago. Their melodies and compositions, “Four Winds”, Night Jasmine”, “Vela al Viento”, influenced by Flamenco, Arabic and music from South America, could be better described as World Music. 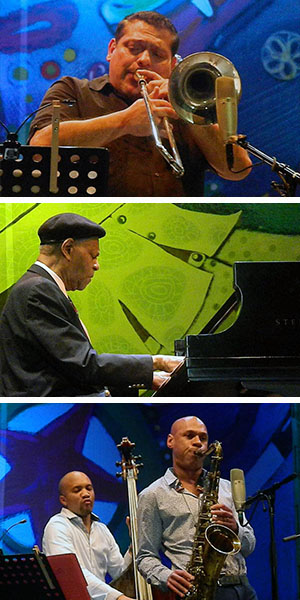 A trombonist from Costa Rica with vast experience in both Latin music (Willie Colon) and jazz (Dizzy Gillespie, McCoy Tyner) Luis Bonilla was the first act for the third night of the Puerto Rico Heineken Jazz Fest. All the music played by the Luis Bonilla Quintet were original compositions, influenced by blues (Double Trouble), New Orleans Jazz (Uh, Uh, Uh) and Tibetan music (Bhurmkukuta). All throughout the presentation Luis Bonilla and Puerto Rican saxophonist Iván Renta exchanged flawless improvisations over the amazing rhythm team of bassist Andy McKee and drummer John Riley. Luis Bonilla closed with the blues “Elis”, a composition dedicated to his daughter.

It is not often that one is in the presence of a true jazz legend; Mr. McCoy Tyner is one of the few giants still alive from the so called golden era of jazz. Tyner has a distinguished career creating and recording amazing music on his own, but besides that, he was the pianist of maybe the best tenor sax player in the history of jazz, John Coltrane. Some references to the music of Coltrane still can be heard in Tyner arrangements, like the “A Love Supreme” chord progressions his quartet played in “Fly with the Wind” and the passionate interpretation of “Ballad for Aisha” in obvious reference to another classic by Coltrane “Aisha” from the album Ole. With seventy three years of age, Tyner still has a clear mind and passion for the music he loves, as he demonstrated on his piano solo “For all we know.” Accompanying Tyner this night, there were three fabulous musicians: saxophonist Gary Bartz, bassist Gerald Cannon and Cuban drummer Francisco Mela.

After a legend like McCoy Tyner, a future legend, sax virtuoso Joshua Redman was the closing act for Saturday night. Redman, son of saxophonist Dewey Redman, was part of a group of amazing young musicians that came out in the early nineties, and revived the classic sound of jazz, going back to the use of the acoustic bass and getting away from the electric sound of the seventies and eighties. Joshua Redman Quartet, Aaron Goldberg on piano, Reuben Rogers on bass and Kendrick Scott on drums, started with two outstanding original compositions, Redman “Disco Ears” and “Shed” by Aaron Goldberg.

A wonderful introduction on sax gave way to Hoagy Carmichael classic “Stardust”. Redman is a perfect example of how is not necessary to discard tradition in order to innovate. His improvisations and compositions, like “Curley Q” and the funky “D.G.A.F” are always full of new ideas but at the same time are rooted deeply in the jazz history and tradition. Proving his incredible technique playing any music form, Redman amazed the public with his interpretation of “Adagio” by Johann Sebastian Bach, closing the night with another Redman original, “Hide and Seek”. 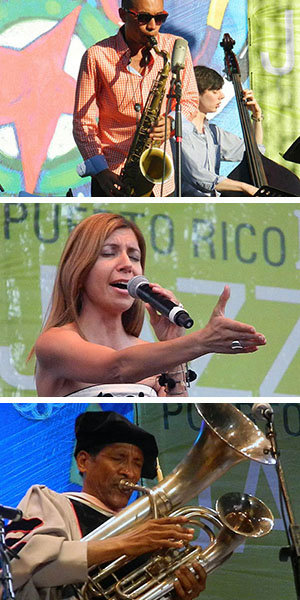 For the last day of the Puerto Rico Heineken JazzFest it is already a tradition to include a presentation of a Berklee Student Band. This year’s band, bassist Alex Gasser, drummer Leonardo Osuna, pianist Santiago Bosch and saxophonist Edmar Colon has been one of the best in recent years. Gasser and Osuna already played on Friday night with Jonathan Suazo Quintet, and on Sunday evening they came back to the stage with Edmar Colon, another young talent from Puerto Rico and for sure a name jazz fans will hear a lot in the future.

These students demonstrated not only that they are already great instrumentalists but also good composers and arrangers. All the compositions played by the band were originals, “Transición” and ” El Tren” by Santiago Bosch, “PG-13” and “Unión” by Edmar Colon, “Libertad” and “Fé Perdida” by Leonardo Osuna and “Flap Jack” by Alex Gasser. As a special guest, percussionist and professor at Berkleee, Eguie Castrillo joined the band for the last part of the presentation.

In 2011 I had the honor to write an album review for a female singer relatively new and unknown in the jazz scene. Even though I knew and liked her earlier recordings, this one in particular was very special. On the album Mexico Azul, this lady and her band recorded beautiful jazz arrangements of songs from the golden era of Mexican cinema, including “Obsesión” by Puerto Rican composer Pedro Flores. I selected that album as one of the best of 2011.

So when I heard Magos Herrera was part of the selection of artists scheduled to play in the 2013 Puerto Rico Heineken JazzFest, I knew I had to be there and also knew the public would fall in love with Magos’ music. As it turn out I was right, Magos Herrera was one of the pleasant surprises of the Fest, captivating the jazz aficionados with her phrasing and beautiful voice in songs like “Reencuentro”‘, “Tus Ojos”, and Milton Nascimento “Canção de Sal”.

Closing the night and the Fest, the honoree, trombonist and composer William Cepeda, filled the stage with the joy and power of his music and a true big band of master musicians. Cepeda is always creating, and looking for new ways to express himself. Flamenco, Bomba and Tap dancers, a Dj and even a rappper were part of Cepeda’s musical proposal for the night. Cepeda played the trombone, caracoles on “Pa’ mi Cuembe” and “Bombatap” the bombarding on “Aires de mi Borinquen” and also was the music director.

The influences on Cepeda’s music include the Puerto Rico traditional music of Bomba, in “Oya, Oye”, the blues fused with Plena in “Cumba Blues”, Bomba fusion with Flamenco in ” Bomba Flamenca”, and more. Some musicians who played earlier in the Fest joined Cepeda for this spectacular closing. Kiani Medina on voices, Iván Renta on saxophone, Henry Cole on drums and Hector Tito Matos on percussion, who joined Cepeda on “Cumba Blues” to end one of the best editions of the Puerto Rico Heineken JazzFest.