“On Tuesday, June 25, I had the opportunity of experiencing three wonderful concerts, one after the other, during the 2013 edition of the TD Ottawa Jazz Festival.”

It was a magical evening that started at 6:30 pm with one of the highlights of the Tartan Homes Signature Series, at the Dominion-Chalmers United Church. A place of worship, Dominion-Chalmers is used as a concert venue, and it truly is a magnificent one. Its elegant design -inspired by Southern French architecture- and its acoustics, make it a perfect setting for live music performances. Between the sanctuary on ground level and a full balcony it accommodates around 950 people. The pulpit, which becomes a large stage, is in front of one of Ottawa’s largest organs (5,157 pipes). The lighting also contributes to creating a unique atmosphere, conducive to contemplation.

Chucho Valdés & The Afro-Cuban Messengers entered the stage on time, opening up the concert with “Congadanza,” the first track of their newly-released album Borders-Free (Sin Fronteras). Piano; double bass; drums; congas; jam block; bell and guiro, played in unison, building up into a controlled frenzy, locking at a given moment into a hypnotic, exhilarating rhythmical communion. Call it a religious experience, as more than one writer has said about the concerts on this venue. With Chucho Valdés & The Afro-Cuban Messengers, it was definitely a spiritual one. They performed the music of Borders-Free (sans horns/no trumpet, no sax) with string and percussion instruments, plus vocals. Judging by the response of the audience (around 800-850 people I would say) and by my own reactions, the band took possession of our minds, bodies and souls. They took our breath away while giving a heart stopping performance. The highlights were many: “Caridad Amaro,” a profoundly touching composition dedicated to Chucho Valdés’ grandmother. “Bebo,” a heartfelt tribute to the life and music of one of the most prolific and important musicians of Cuba: Dionisio Ramón Emilio Valdés Amaro, better known as Bebo Valdés, Chucho’s father and mentor. “Pilar,” dedicated to Mr. Valdés’ mother. “Afro-Comanche,” a deeply spiritual composition that encompasses the historic saga of Black and Amerindian peoples. Dreiser Durruthy Bombalé  on batá drums and lead vocals, Yoruba chants, summoned up the Orishas to Dominion-Chalmers United Church during this magnificent composition.

Maestro de Maestros, Dionisio de Jesús Valdés Rodríguez, better known as Chucho Valdés shined throughout the performance, seamlessly mixing diverse musical elements from different genres and cultures. He recalled pieces from the classical world (Bach and Rachmaninoff), the jazz world (Dave Brubeck’s “Take Five’) and the Puerto Rican songbook (Pedro Flores’ “Obsesión”). I couldn’t help but thinking how Mr. Valdés is resembling his father, both physically and spiritually. The other members of the band had plenty of room to shine on their instruments, overjoyed with pride. By their expressions, and sometimes almost innocent, childish smiles and gestures, one could tell they were having so much fun. The audience gasping in amazement at the display of their skills and artistry. 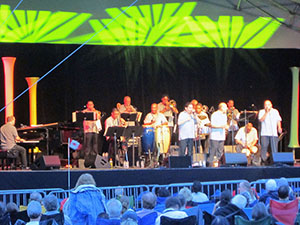 At 8:30 pm. I was already at the Concerts Under the Stars main stage at Confederation Park, right at the corner of Elgin and Laurier streets, ready to take in another superb performance, this time by the Grammy Award-winning ensemble Spanish Harlem Orchestra. Led by pianist, composer, arranger Oscar Hernández, and directly from New York City, the Spanish Harlem revisited many of their hits, to the delight of the audience, specially the dancers. In the end, it didn’t matter if one had dancing experience or not, the outdoor venue became a large dance floor, it was impossible to sit/stand still to the pulsating, infectious rhythms of one of the best Latin Big Bands whose mission is to keep the tradition of Tropical music and Latin jazz alive. As it is customary, they also performed some terrific, original Latin jazz tunes to satisfy the hard-core jazz and Latin jazz fans. 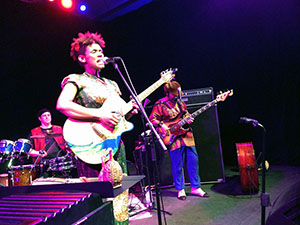 To close the night on a high note, I headed around 10:30 pm to the OLG After Dark Series stage, on the Marion Dewar Plaza, just across the street. Over there, Carmen Souza, who according to LJN Senior Writer Raul da Gama is an “extraordinarily talented vocalist who was born in Lisbon, Portugal, within a Christian family of Cape Verdeans… she  has melded her unique mix of Afro-Caribbean and native Creole music with the fluttering feeling of saudade and the dialect of jazz into an idiom of her own.” That’s a fitting description of this wonderful singer-songwriter, passionate artist, who’s been touring United States and Canada this summer. She and her band performed to the best of their talent, showcasing songs from their most recent release Kachupada. Their music filled the air and the audiences’ hearts and souls with joy and positive vibrations.

What a night! Thank you to the organizers of the TD Ottawa Jazz Festival for putting together an amazing line-up on the same evening.