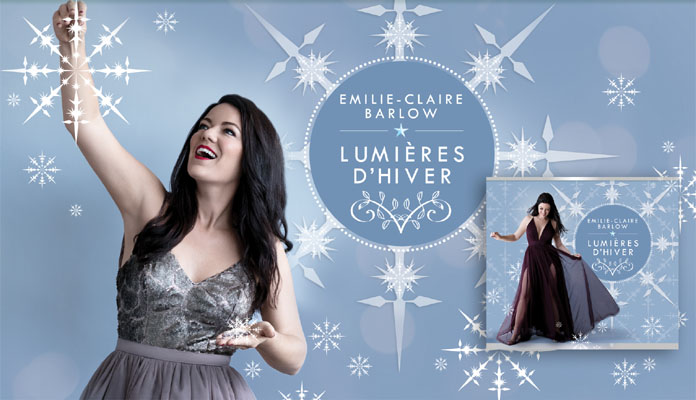 Another first for me, a Christmas holiday show to see a Canadian jazz chanteuse. A debut concert at the Royal Conservatory in support of her new album Lumières d’hiver, her twelfth independently released album on her own label, Empress Music Group.  Emilie-Claire Barlow, with a performing career spanning over twenty years. Someone who I hadn’t seen live for about ten years, not since her time with Bill King’s Real Divas. She has honed her skills as an arranger, producer, manager and bandleader, as well as winning  numerous awards and accolades along the way.

The introduction showed class, individual members of the band coming on stage one at a time, beginning with Kelly Jefferson. He would play his shaker to a holiday rhythm, a great shaker player. He was followed by the bassist Daniel Fortin, then drums, keys, guitar, the backing vocalists and last but not least the star of the show Ms. Barlow. The song progressed from a shaker to a full blown sound, a French song or two, as she indicated to the audience we had just heard “Combien de Noël” and “Janvier”.  At one point in the intro she danced over to the pianist – Amanda Tosoff and joined her for a bar or two, a different approach to showing the audience she can play piano too.

Ms. Barlow was shimmering this night, in a long golden gown, bare shoulder, open back. Black strap stiletto heels peaked out as she pranced across the stage in glowing splendour. Her hair, done up in a bun and pulled tightly back,  she looked elegant and sophisticated.  A class act. Her band looked classy as well, the men all dressed in suits, the back up vocalists, three ladies, Kathryn Rose, Stephanie Martin and Rique Franks were dressed elegantly in formal wear, dark dresses and high heels. The string section made up of three women and one man were also looking dapper.

Emile-Claire Barlow seems at ease on stage, she enters into easy rapport with her audience, she can be funny, cracking a joke or telling a story of life on the road or in the tour bus. She can get serious with stories of how songs came to be written, as the one composed by her mother, “Angel’s Lullaby” a tribute to her mother who was in the audience. The song performed as a beautiful ballad, heartfelt and displaying an impressive vocal range by Ms. Barlow. 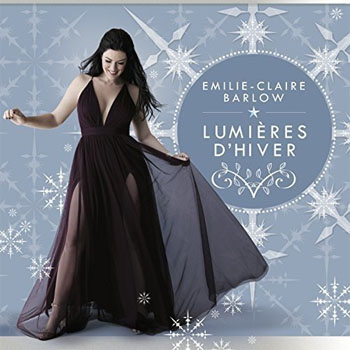 The new album, Lumières d’hiver comprised of fourteen songs is Christmas jazz, I believe the audience heard the complete album this night including some songs from her other albums. The show was well produced, the back up vocalists departed the stage to make way for the string section who joined the show about six songs in. The strings played on “What Are You Doing New Year’s Eve” a great arrangement, with a full lush sound.  Another song with strings, “I’ve Got My Love To Keep Me Warm”, I was most impressed with the strings of Reg Schwager who took an inspired solo during the song. “Santa Baby” was another one with a duet intro by Emilie-Claire and Mr. Schwager before the band kicked in to make this a frolicking festive favourite. The strings would depart to make room for a new set of strings, Melanie Doane and 26 of her students from the Doane Uschool, who were then joined by another 125 kids all of them with ukuleles who came in through the aisles and mingled with the audience. I have never seen, nor heard so many ukes. And away we all went, with a rousing rendition of “Dashing Through The Snow”.

After so much excitement it was time for the rest of the band to take a pause,  and the audience was treated to a duet of Reg Schwager and Emilie-Claire Barlow. A beautiful rendition of “Bells Will Be Ringing”  performed slow and mellow, full of serenity and the blues. One of the songs from the new album that really impressed me, “River” by Joni Mitchell, with arrangements by Ms. Barlow and Mr. Webster. A fresh, inspirational take on a classic tune. One by one the band rejoined for songs in trio format, quartets and quintets until we arrived at the point where the full band was on stage and Ms. Barlow introduced her stellar cast to the audience. The first of a couple of standing ovations, while the audience paid homage to the entertainers. The final song  “Winter Wonderland” had all of the musicians romping and grooving with a fast upbeat rhythm.  Kelly Jefferson blowing his heart out on the tenor saxophone with stops and starts and howls of delight. The string section was strumming with fire, the back up singers were movin’ and shakin’. A grand finale, an exciting ending to a wonderful concert.

Arturo Sandoval - Cuban Focus Series - March 23, 2019 Spring had arrived but you wouldn’t know it by the temperature...
Read
Concert Reviews

Brazil meets Cuba, a time for Markham and GTA residents to come in from the cold for what was promised...
Read
Festival Report