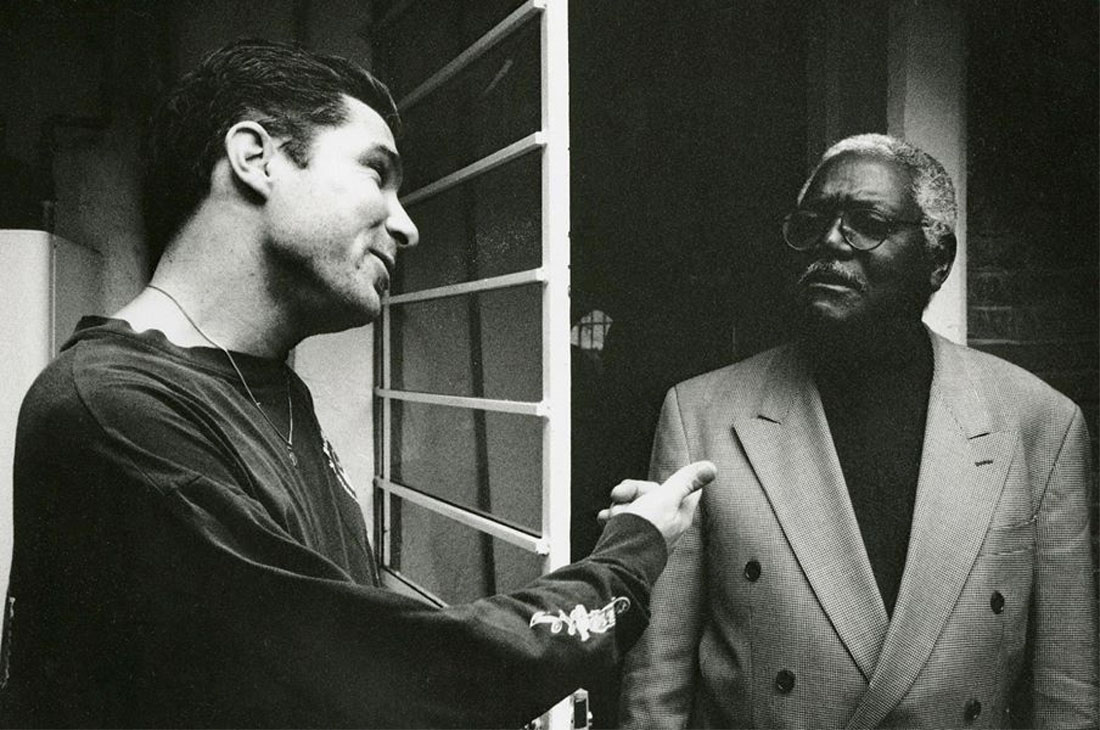 I awoke to the pleasant surprise of a Google Alert in my email. I clicked to find Variety Magazine had published an article about the upcoming [September 2020] world premier of Matt Dillon’s documentary “El Gran Fellove” at the San Sebastian Film Festival in Spain. It included two clips from the film, one which conjured up a lot of deep memories.

Featured in the clip alongside Fellové are two other historical icons of Cuban music – singer (and musical hero to many) Celio González Sr. and a close friend of mine, trumpeter Alfredo “Chocolate” Armenteros.

I first met Chocolate (pronounced ch?-k?-lah-tay) in 1996 when we participated together in an all star Latin Jam Session recording in L.A. Three years later, I was embarking upon the recording for Fellové’s album- his first one since 1979. I had spent a month preparing musical arrangements and copying out all the individual music parts for each musician, not knowing that Chocolate would be participating in this.

For those who know the world of Afro Cuban music, Chocolate Armenteros is considered to be Cuba’s Louis Armstrong. His musical legacy and larger than life personality precedes him, going back to his first recordings in 1947 with René Alvarez’ band, then Arsenio Rodriguez (one of the most important figures in all of Cuban music history). He played trumpet in Bebo Valdés’ Tropicana Orchestra from 1950-57, was Beny Moré’s cousin and put together the brass section for that legendary orchestra, then hopped over to New York by request of Mario Bauzá, to play trumpet in The Machito Orchestra for decades. Each one of those mentioned played a key role in defining and designing Cuban music of the twentieth century, leaving behind rich and prolific amounts of recordings.

And these are the broad strokes. Choco also enjoyed a solo career of his own for several decades.

One other group that he was part of, that I feel important to mention, is Grupo Folklórico Y Experimental Nuevayorquino, created by Andy González with Jerry González and produced by René López. (Without going into a full blown geek-out here about the hows & whys, just look into their 2 albums  – Concepts In Unity (1974)  and Lo Dice Todo (1975).  (You can thank me later).

Ray Bradbury might have easily labeled Chocolate a “time machine” much like Colonel Freeleigh in Dandelion Wine.

Choco’s stories were endless, putting you right in the middle of that golden age of Pre-Castro Havana; the nightclubs, the music, the people, the endless parties. As someone who had been listening to his music since the late 80’s it was almost surreal for me to then have a close, familial friendship with him a decade later.

Unbeknownst to me, Matt Dillon had flown Chocolate down to Mexico City to perform a few songs on Fellové’s album, as a special surprise for my birthday (the recording sessions were scheduled during the week of my 37th). You could imagine my surprise when I showed up to the rehearsal and found Choco hanging out in the kitchen of the studio. At first I thought that he just coincidentally happened to be in town for a gig of his own and wanted to come say hi to all of us.

It was one of the most amazing and thoughtful birthday surprises I could’ve ever wished for. What I hadn’t thought of in the moment was that I was now faced with adding one more instrument into the musical arrangements that I had made for the specific size ensemble. It required a bit of thinking on my feet, but we worked things out nicely and even came up with one more song for the album.

Choco’s participation was something special for Fellové, since they had been friends since 1949 in Havana and had never recorded together before. It was a joy for me to see them reuniting as friends of 50 years for a project that I had helped instigate.

Fellové hired Celio González Junior to play timbales for our recording. Celio Jr. had been a member of Fellové’s working band in Mexico City for some time and had known Fellové since he was a small child. Fellové was like an uncle to him. Celio González Sr. and Fellové shared a close friendship since Cuba which continued in Mexico after Celio Sr moved there in 1959 (after the Cuban Revolution).

Already established as lead singer with the band Sonora Matancera since 1956, Celio Sr. was best loved for his hit bolero records and considered to be the Frank Sinatra of South America.

Because of his decades-long friendship with Fellové, it was no surprise to have him hang out with us during the sessions. The big surprise came during the recording of “Descarga Chocolate”. In the middle of the tune, an inspired Celio (Sr.) left the engineering booth and joined Fellové in the vocal booth to sing backup vocals. This was a special moment for all who were there, to see such true love and humbleness coming from someone who was  legendary in their own right.

What you’re seeing in the clip is that exact moment, and the great love and mutual respect these two friends had for each other.

Celio enjoyed himself so much that he sang again on several of the other songs on the album- this time with his wife, and Celio Jr., making it a family affair.

Now, all three of these musical giants are gone, ascended back into the ether – Celio in 2004, Fellové in 2013, and Chocolate in 2016, but I remain here to share my memories of the time we spent together.