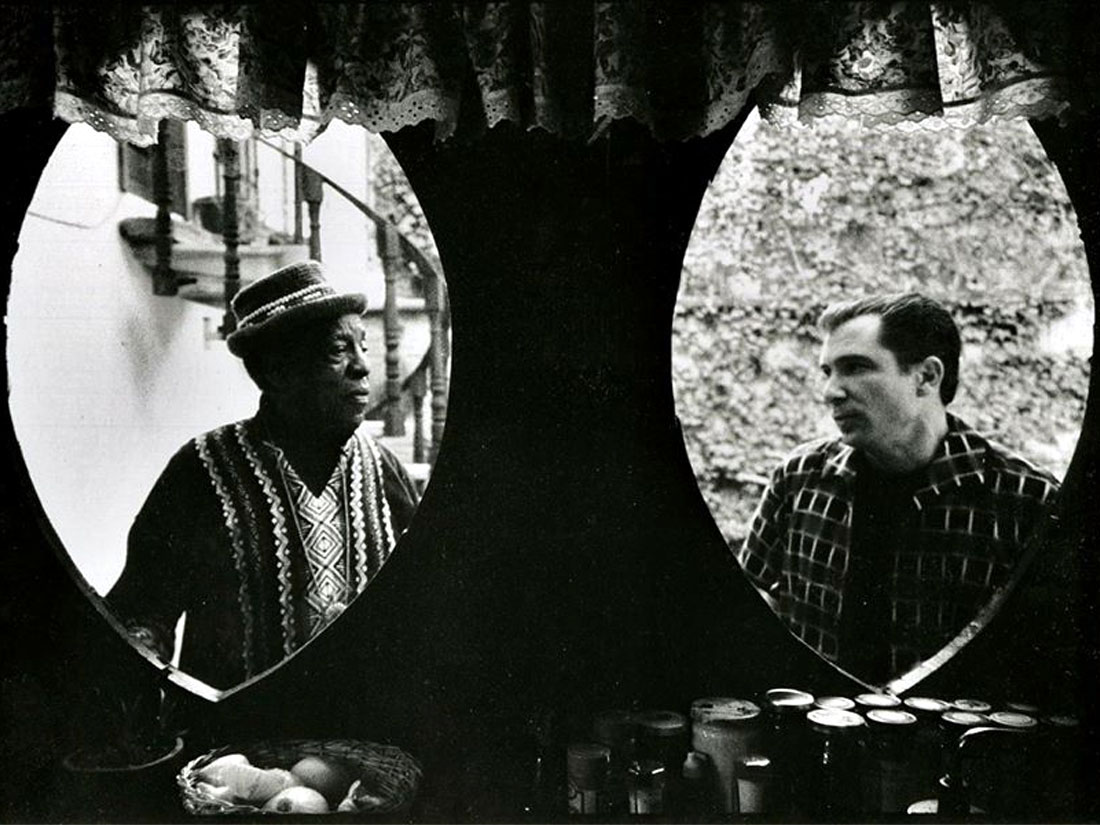 Francisco Fellové Valdés (October 7, 1923 – February 15, 2013), also known as El Gran Fellové (The Great Fellove), was a Cuban songwriter and singer. A prolific composer of the feeling generation, he is well known for his particular style of scat singing known as chua chua. He is the author of the famous guaracha-pregón “Mango mangüé”, recorded by Machito and Celia Cruz among others. He was the cousin of conga drummer Carlos “Patato” Valdés. (wikipedia)

In 1999, American musician, composer, producer and bandleader from Los Angeles, California Joey Altruda, embarked upon a film and album project with actor/director Matt Dillon about the life and career of legendary Cuban Jazz singer Francisco Fellové Valdés, also known as El Gran Fellové. Now more than 20 years later, the film premiered as a Special Screening at the 68th edition of the San Sebastian Film Festival in Spain, on September 22, 2020, where it received a rousing reception.

The synopsis for the film at the San Sebastian Film Festival read: “El Gran Fellove is a documentary film from actor and filmmaker Matt Dillon, that chronicles the musical career of Cuban scat singer and showman Francisco Fellove and the recording of his last album. Through a series of interviews, archival photos and videos, as well as Matt’s own footage, the film recounts Fellove’s life as a struggling musician in Cuba, his eventual success in Mexico, and the contagious love he had for music until the very end.”

Sheri Linden [The Hollywood Reporter] in her review of this documentary wrote: “In his first stint at the helm of a documentary, Matt Dillon celebrates vintage Cuban music and one of its long-forgotten stars…In a Mexico City recording studio in 1999, the planets aligned. At the center of the jubilant cross-cultural, intergenerational music sessions was Francisco Fellove Valdés, stage name El Gran Fellove, who half a century earlier had combined Afro-Cuban rhythms with jazz to create a new style of scat singing. Overseeing the project was Joey Altruda, a Los Angeles-based bandleader and producer, and filming the event “guerrilla-style” was his pal Matt Dillon…Fellove’s story is also the story of a larger emigration, that of the Cuban musicians who left their pre-revolution island home for Mexico in the 1950s (Fellove made the move in 1955). As singer Dandy Beltrán, one of those émigrés, notes, many of them were Black, Fellove included, and, in stark contrast to the slim opportunities and racial discrimination in Cuba, they found a country where they were “treated with kindness” and where recording and film studios eagerly welcomed their talent.”

With Mr. Altruda’s permission, I am sharing with our readers his story about The Great Fellové. You can learn more about him at his official website: https://joeyaltruda.com. Read part 1 now, in a few days we’ll publish part 2. I’m sure you will enjoy reading this fascinating story as much as I did. – Danilo Navas [latinjazznet.com Founder, Webmaster and Editor]

Cruising Wilshire Blvd towards Venice Beach, top down of my ‘57 Caddy Biarritz, I compulsively rewound the cassette tape that Matt Dillon had recently sent from New York. It was something he had taped for me off an old record he’d found on his last trip to Havana, a record that had obviously been thoroughly enjoyed, judging from the ticks and pops that accompanied the music. I was completely captivated by what I heard flying out of the speakers, turning the volume up even louder for the passersby. It was this otherworldly blend of Cuban Mambo music  played by a small combo, using their voices as a horn section instead of brass, singing “Chua – Chua” behind the most fiery, crazy scat singing improv in Español. Did I mention it was from another Universe?

How was it that after 20 years of collecting Latin Jazz records and Cuban music I had never heard of this?  How is it that none of the Afro Cuban musicians who had mentored me over the years never hipped me to El Gran Fellové??? I became obsessed with his music and nearly wore out that cassette within the first month.

You’re probably wondering how a guy like Matt Dillon plays into all of this and  what is his relationship to Cuban music. Good question. In a nutshell, we became friends through a mutual friend, actor Max Perlich who also has a love of Afro Cuban music, Jazz, eclectic record collecting, nostalgia, retro culture etc.

Matt had been a long time music head and record hunter since his days of hanging out with The Clash and their manager Kosmo Vinyl.

Through Kosmo, Matt was exposed to a huge amount of great eclectic musical genres, including early Jamaican music, Blue Note Jazz, 60’s garage psych and so much more in between. But it was Matt’s New York experiences in taxi cabs which veered him towards Salsa, Boogaloo, Latin Jazz, etc. It was an essential soundscape of the city at that time.

When we met in ’94, we instantly clicked about old Latin records and he began picking my brain about Cuban artists and records that he should keep his eye out for. I made him a short list of essentials ~ Arsenio Rodriguez, Chappottin, Chocolate Y Sus Estrellas, Cachao, etc and set off his fuse. Before I knew it, he was unearthing the most amazing records, many of which I had never heard before, and giving me the most killer mix tapes (remember mix tapes?) .

Back to ’99 and the Fellové cassette; one day I received a call from Matt in NYC, telling me he had recently heard Fellové was still alive and well, living in Mexico City.

With great enthusiasm he said, “You should find him and make an album”

I got off the phone and called a friend of mine who was a talent booker for one of LA’s largest Latin music clubs at the time, repeating to him what Matt had just told me. About ten minutes after the call, he hit me back with contact info for someone in New York who was currently repping Fellové. This was manifestation at it’s finest (IMHO).

In brief, what followed was several trips to Mexico City in the fall of ’99, meeting with Fellové, playing music with him and his group of young trailblazing Cuban expat musicians, and producing an album. He hadn’t recorded an album of his own since 1979 and this was a big deal for all of us. Matt followed me down to Mexico along with our friend Drew Carolan, a well noted photographer and line producer, and captured the whole recording process on film. What I had in my mind as being a really great EPK (electronic press kit), turned into a full blown documentary about a little known musical movement in Cuba called “Filin” (phonetic for Feeling).

It began in the 1940s and reached its zenith during the 1950’s in Havana. Artists such as Bebo Valdés, Cachao, José Antonio Méndez, Quarteto D’Aida, Omara Portuondo, Chico O’Farrill et al were integral parts of this fringe development, and right in the center of it all was Francisco Fellové Valdes, later known as El Gran Fellové. Filin was the birth of what was later termed “Latin Jazz” here in the states.

Needless to say, the process of creating this documentary was monumental in all of the research and interviews involved,  and was also put on the back burner for some time due to other prior commitments on Matt’s end. At the same time, 1999 wasn’t the greatest time to be releasing music due to so many file sharing sites pirating practically anything.  I decided to wait for the film to see the light of day before releasing the album in hopes that the time would come sooner than later.

Production finally resumed about eight years ago and the film premiered at the San Sebastian Film Festival in Spain on September 22 of 2020. The album release is also pending at this writing.

This has been a long, arduous journey for me, one of many emotional peaks and valleys, and I am beyond pleased to finally see this release happen, for the story of Filin to be told to the world, and for the genius of El Gran Fellové to finally gain the recognition he so rightly deserves.