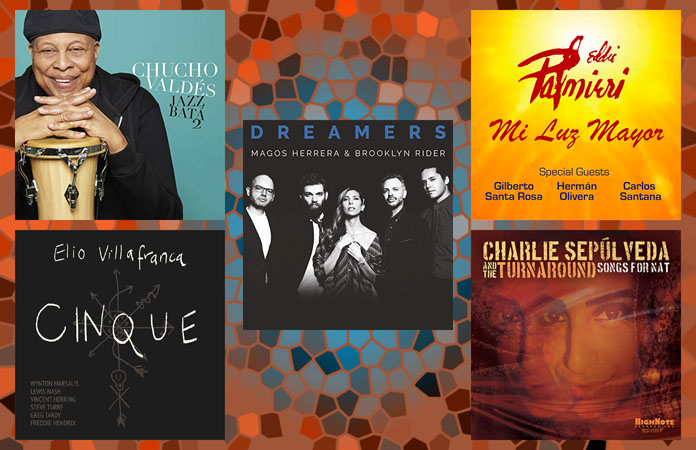 20 recordings make our list, and today we present you our third installment. The order in which they are presented doesn’t mean anything. We consider them equally outstanding projects. Read on and listen, and consider buying the music of these wonderful artists. Your life will be enriched with their music, and will surely help you cope with the pain and sorrow we experience day after day in this convoluted world. – Danilo Navas

“You can now declare Magos Herrera to be one of the greatest contemporary interpreters of song. Her consummate and sultry contralto is pitch-perfect and she has both the voice and the artistry to interpret traditional South American repertoire, which she sings in Spanish and Portuguese (as well as in English) here on this breathtakingly beautiful album, Dreamers. Why is this hour-long disc that feels like an epic such a triumph? Clearly it is first and foremost Miss Herrera’s atmospheric singing; moreover it is also the fact that she turns the elemental heartache of a whole generation of South American Dreamers into anthems that herald their journey away from social and political repression into the promise of freedom and the triumph of human endeavour in the United States. The fact that the American administration of 2018 is trying its best to destroy the dream makes these songs of longing all the more poignant, and who better than Miss Herrera to turn all this pain into joy sublimated in the smokiness of her vocal ardour?” – Raul da Gama

“When Old Man Bebo first disappeared from music in Europe and before he was re-discovered again by Paquito D’Rivera, his son Chucho Valdés began to emerge from the long and legendary shadow of his father. By the 1970s he first recorded an album at Egrem Studios in Havana that he called Jazz Batá (Malanga Music, 1972) as he was on the verge of stepping into the limelight with his iconic band Irakere. Today Chucho Valdés is a musician of unprecedented repute and stands virtually alone and head and shoulders above every living Cuban musician, indeed every living pianist playing Afro-Caribbean music. His oeuvre is so enormous that his repertoire forms a vast library of Afro-Cuban music just by itself. Moreover, he is one of the most prolific composers and seems to be able to step into a studio with new material at the proverbial drop of a hat.” – Raul da Gama

“The spiritual nature of Mi Luz Mayor, with its metaphor of “The Light” is a magnificent big band recording by Eddie Palmieri and may appear as if it lends truth to the abject humility of perhaps the greatest living Latin Jazz artist of this millennium. Mr Palmieri is nine years younger than his legendary brother, Charlie whom he graciously describes as “the pianist” while, “I am just a piano player,” the younger Palmieri will freely admit. Of course his legions of admirers know that while the elder Palmieri is, indeed, truly venerable, Eddie Palmieri is every bit the proverbial chip of the old block. And while you may not hear much solo piano playing on this album it’s because Eddie Palmieri has deferred all of that virtuosity for the greater glory of his love story with music and Iraida, the woman who shared his life until 2014 and then ascended into the realm of the spirits from where she obviously watches over him, the family and the music they created…” – Raul da Gama

“The record package itself for Cinque is modest, but oddly impressive; its black cover has the title and Mr Villafranca’s name hand lettered across the dancing African art, a detail from Firma de 7 Batalla: Firma to overcome challenges and bring positive spiritual changes. The whole aspect presents a fitting portent of the epic musical voyage to come. The music on both discs displays Mr Villafranca’s innate ability to convey – with memorable eloquence – dramatic narratives, a skill hones through previous compositions over several records made since he came to America from his native Cuba. Seldom does a mixed vocal and large ensemble programme such as this hang together so perfectly, each successive piece across the five movements tightening the ratchet of intensity towards a final, dramatic, and pertinently contemporary anguish and joy. It helps that all of the performers – including illustrious ones such as Wynton Marsalis, Leyla McCalla, Steve Turre, among others – are at the top of their communicative powers.” – Raul da Gama

Carlie Sepúlveda and The Turnaround: Songs for Nat (Highnote)

“This is not a tribute to Nat Adderley, but if it were, it would be a better one than any trumpeter has done. As it turns out Charlie Sepúlveda and The Turnaround is paying a heartfelt tribute to his wife, Natalia. Still, the result of such respectful adulation on the part of Mr Sepúlveda for the love of his life might also fare well as a tribute to the other half of the great Cannonball Adderley. This is a fascinating meta-work that creates associations, resonances and new perspectives, not simply between the two composers and trumpeters, but also between the whole relationship between Jazz and Latin Jazz. Moreover, rather than provide a pool of music Mr Sepúlveda and his group re-create the vivid atmosphere of that iconic band with each song, with an ironically entitled curtain-raiser, “Exit”, perhaps even suggesting a handing over of the proverbial torch from one trumpeter to the other – all of which is done without the slightest suggestion of any presumption on the part of Mr Sepúlveda.” – Raul da Gama