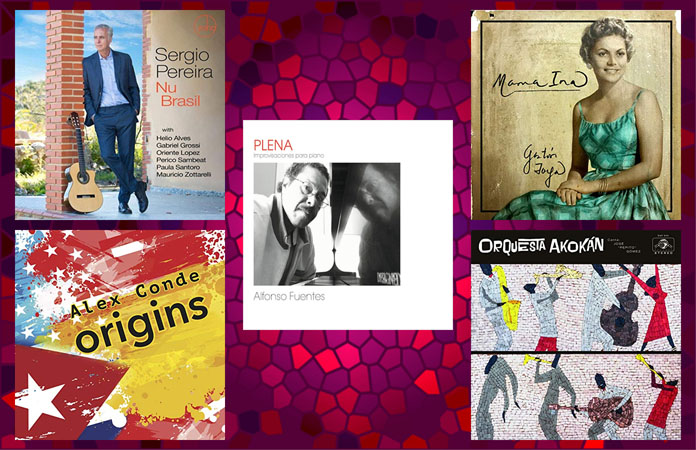 20 recordings make our list, and today we present you our second installment. The order in which they are presented doesn’t mean anything. We consider them equally outstanding projects. Read on and listen, and consider buying the music of these wonderful artists. Your life will be enriched with their music, and will surely help you cope with the pain and sorrow we experience day after day in this convoluted world. – Danilo Navas

“For the carioca, Sergio Pereira, playing on the Portuguese word “Nu” as the title of his album Nu Brasil and then following it up with a wonderful play on strings to make it all come alive must be the easiest thing in the world. After all he is a strings player himself, playing what Brasilians call violão in the grand tradition of the long line of Brasilian guitarists which he not only follows but embellishes enormously. Mr Pereira has also taken a leap into the great unknown, so to speak, with music that has complex orchestrations, thereby mixing the traditions of men like Laurindo Almeida and Baden Powell with those of Heitor Villa-Lobos. A bold move indeed as Mr Pereira has not attempted before. His debut album, Swingando – although it featured a constellation of Brasilian superstars was a small ensemble effort. But this recording is another matter altogether…” – Raul da Gama

“In this writer’s view, PLENA is one of the most impressive (solo) debuts of 2018. Oddly, the composer, pianist, educator, poet and activist Alfonso Fuentes is better known in China – with who he shares a special relationship – than he is in the States. As the title implies, the album consists of improvisations for solo piano with “musical expressions that represent Puerto Rico, and its the Caribbean and Latin American surroundings” performed at the moment. Fair warning to listener’s who have preconceived notions about what Puerto Rican music is, and is not. PLENA is classical, jazz and “third-stream.” Also, folkloric rhythms and “Latin” music, in all its forms, expressed freely and openly. On a broader scale, the music offers listener’s a glimpse into the mind of a virtuoso and visionary deserving of more broader recognition. In effect, Alfonso Fuentes has created a singular masterpiece. Also, arguably one of the most significant recordings to come out of Puerto Rico in recent years. I highly recommend it.” – Tomas Peña

“A fierce energy leaps out of the opening notes of Mama Ina, the exquisitely-crafted debut album by the prodigiously-gifted bassist Gastón Joya. It is the song after which the album gets its title and Mr Joya hasn’t even begun to express his extraordinary genius. For that one has to wait for “No Te Empeñes Más” and soon after, “El Día Que Me Quieras” on both of which the young bassist picks up his magnificent sounding contrabass. Primary colours abound in the beautiful woody textures with rhythms and phrasing that are pristine, precise and alert that strips the gravitas of the music down to an almost nude depth and transparency of texture. Through it all Mr Joya keeps the music moving with balletic grace and a vividness that spotlights the musical canvas of each of the songs in a mighty, painterly fashion taking us to another world.” – Raul da Gama

“When Alex Conde turns up the power at any given time, he’s like an orchestra all by himself. Now magnify that several times on Origins, a disc on which his power is augmented by brass: Brian Lynch on trumpet and Conrad Herwig on trombone, and woodwinds with Dayna Stephens on tenor and soprano saxophones together with a rhythm section with enormous clout, featuring Luques Curtis or John Benitez on bass, Marcus Gilmore, a young Turk whose pedigree goes back to his grandfather, Roy Haynes; Guillermo Barrón on cajón augmented by Camilo Molina on timbales, Andrés Abenante on guitar, together with Frank Abenante and Isabel Abenante providing uniquely Flamenco colouring with their rhythmic hand-clapping. And as if that were not enough there are the voices of Mr Conde’s father Alejandro Sr. and Ismael Fernández.” – Raul da Gama

“It takes more than academic proficiency in music to arrive at the source of its splendour and few American musicians know that better than Michael Eckroth. The pianist, whose breathtaking arrangements on the music of Orquesta Akokán – Canta José “Pepito” Gómez, has not simply proved that he has authentic Afro-Cuban musical roots, but that the sap courses through his blood, to the extent that it even informs the very nerve endings in his fingers. As a result he not only plays like a master, but also writes Afro-Cuban charts like one. Probably better still – and this is despite his university musical education – he seems to be blessed with the soul of a rumbero, which is to say that what he writes comes as naturally to him as clave and tumbao did to the great rumberos in Cuban traditional continuum throughout this a one-of-a-kind recording.” – Raul da Gama