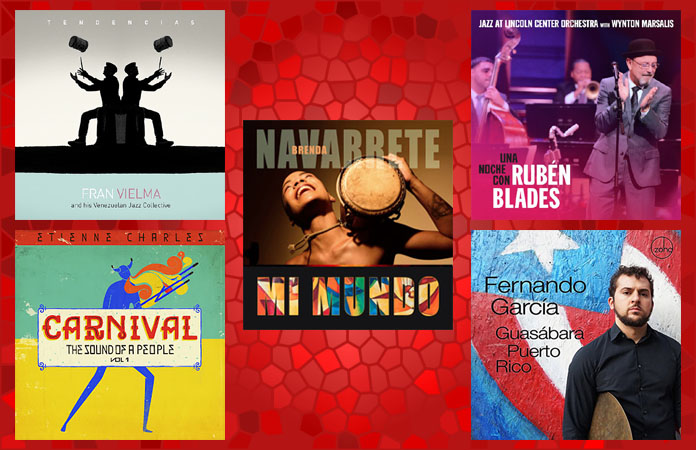 20 recordings make our list, and today we present you our first installment. The order in which they are presented doesn’t mean anything. We consider them equally outstanding projects. Read on and listen, and consider buying the music of these wonderful artists. Your life will be enriched with their music, and will surely help you cope with the pain and sorrow we experience day after day in this convoluted world. – Danilo Navas

“The Afro-Cuban percussionist and singer, Brenda Navarrete is one of the best-kept secrets of her generation. However, now, thanks to producer extraordinaire and Alma Records founder, Peter Cardinali, the secret is out. With her short, but exquisite album, Mi Mundo, Miss Navarrete joins the ranks of her musical elders, Román Díaz, Pedrito Martinez, as one of the premier batá drummers and vocalists to emerge as musician and Lucumí who have also made a successful transition to Jazz, Latin-Jazz and other hybrid styles of traditional and popular Latin-American music. With a voice that is pure, bright and high-sprung, Miss Navarrete navigates her way with vocalastics that will surely be the envy of the Latin-Jazz music world. Eschewing the traditional practice of raising the roof with her vocals, Miss Navarrete is often whisper-soft, always seductive, and makes it seem that her music emerge as living breath from deep with the recesses of her body. Her versions of Juan Tizol and Duke Ellington’s “Caravan” and more especially on “Drume Negrita” are infused with such magic that she seems to set the lyrics on fire, but with an almost cold, blue flame.” – Raul da Gama

Una Noche Con Rubén Blades reveals a side of the iconic sonero and the Jazz at Lincoln Center Orchestra rarely seen. For long-time fans, there are the hits: Sin tu Cariño, Ban Ban Quere and El Cantante among others. On the flipside, there is Rubén the consummate showman and crooner, performing American standards such as Beguine the Beguine, I Can’t Give You Anything But Love, Too Close for Comfort and a mind-blowing medley that pairs Mac the Knife with Pedro Navaja. And, the Jazz at Lincoln Center Orchestra, under the direction of Carlos Henriquez, who does a masterful job of arranging, conducting and transforming the Orchestra in a hard-driving salsa band. Una Noche Con Rubén Blades – the recording – does an admirable job of capturing the sights and sounds of the historical collaboration. Also, it’s the next best thing to being there. The concert was part of Jazz at Lincoln Center’s “Jazz Through the America’s” series, which explores how jazz has both integrated and influenced the rich musical traditions of the Caribbean and North, South and Central America. Highly recommended. – Tomas Peña

“It might seem easy to be mesmerised and swept away by the ceaseless dancing of Puerto Rican music from one odd time signature to another. And in the best of its exponents of rhythm – drummers such as Fernando García, for instance – there is a dazzling, seemingly never-ending variety of these that are trotted out on Guasábara Puerto Rico. But each becomes more meaningful in the drummer’s hands as his extraordinary recital on this disc unfolds. And even as the quality of his playing is altogether exceptional here it seems that he takes nothing for granted as he lays down one complex tattoo after the other. Nor should we take anything for granted in listening to him. Not that he does anything too wildly idiosyncratic, let alone provocatively iconoclastic. At the same time he clearly lets us know that he plainly understands this is no virtuoso show of force, but plainly one possibility of expressing the fascinating nature of Afro-Caribbean music through the Puerto Rican eyes of an expert young musician.” – Raul da Gama

“On the evening of November 16, 2018, Trinidadian native, amazing trumpet player, recording artist, bandleader, composer, arranger and educator Etienne Charles brought to Toronto his most recent project, Carnival: The Sound of a People. It was the  first concert of the Jazz at the George Series, a new jazz series presented by Sony Centre for the Performing Arts at the George Weston Recital Hall (Toronto Centre for the Arts). It was also the premiere of Carnival: The Sound of a People (the recording) in North America. Mr Charles has close connections to Canada, he has family in Toronto. It was his Canadian uncle the one who introduced Etienne to the trumpet in his early years. Carnival: The Sound of a People is an epic musical endeavour of profound dimension. It’s a fascinating artistic statement that goes deep into the roots of Trinidadian culture, into Afro-Caribbean history. It celebrates the identity, the survival of a people through music and dance, through traditional manifestations of sarcasm and rebellion against the oppressors, but also of joy and struggle for freedom, all of this kept alive in the carnival festivities.” – Danilo Navas

“Fran Vielma could not think of a more provocative name for an album than Tendencias, especially amid the enormous musical output of music emerging from both north and (especially) south America that is either branded “Latin-Jazz” or simply “folkloric”. The fact of the matter is that traditional music from South American countries has continued to evolve ever since colonialism came to the southern part of the continent. Similarly, the music of the United States – Jazz in particular – has and is, by definition open to influences. But Mr. Vielma is suggesting something much more radical in calling his album Tendencias, and even a cursory listen suggests that he has every right to suggest that he’s indeed creating something entirely new with this music. The magic lies in the music and here Mr. Vielma begins with a distinct advantage: he is a percussion colourist of great distinction. Clearly also he “hears” music not only from the vantage point of the complex rhythmic patterns that adorn the music of Venezuela; the joropo oriental, a rural form which originated in the llanos, or the gaita zuliana and golpe de patenemo, or even the ones imported such as salsa from the Cuban-American barrio of Harlem.” – Raul da Gama

An Evening with Jane Bunnett and Maqueque in Toronto