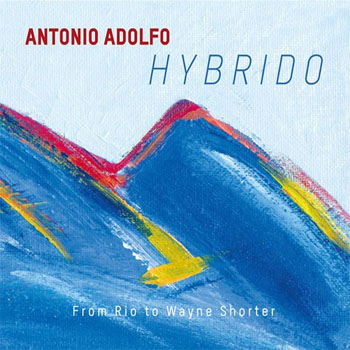 If ever there was a burnished glow to Brasilian music, it is here on Hybrido – From Rio to Wayne Shorter by Antonio Adolfo. It is a very different kind of shimmer than what exists in Wayne Shorter’s originals. Adolfo’s interpretations have the rhythms of Brasil whispering within them, while his finely honed pianism recreates them anew with Marcelo Martin’s playing the part of Shorter, but in his (Martins’) own uniquely singular voice. Shorter’s imposing music is played respectfully and – more importantly – with a great deal of affection, their classic melodies inspiring exquisite figurations, marvelous contouring of melody and cross-rhythmic phrasing and pulses carefully built into these exquisite versions on Hybrido – From Rio to Wayne Shorter.

It is entirely possible to imagine Antonio Adolfo in Wayne Shorter. The pianist is a celebrated virtuoso, pedagogue and composer in his own right. Using his white-hot technique in these re-imagined Wayne Shorter originals, he reveals how to interpret music of an ultimate inwardness and confidentiality with sublime mastery, almost lost in meditative reflection. Certainly you will rarely hear if ever hear Wayne Shorter’s introspection caught and held with greater affection and finesse. How vividly Antonio Adolfo responds to each one of them vividly and with composerly perfection with familiar patterns of lyricism. How caressingly he embodies Shorter’s spare outlines in his own response to them in “Afosamba”; a dream performance that captures all of Wayne Shorter’s tranquility and rippling melodies unfaltering rhythmic majesty married to poise and translucency.

Wayne Shorter’s music is easily among the greatest music of the 20th and 21st centuries along with that of Thelonious Monk’s and Herbie Nichols’. Shorter’s music is frequently attempted and, though not as difficult as Monk’s and Nichols’, is still difficult to master. Himself a great lover of the magic of Brasil, he released an iconic homage to Brasil with Native Dancer and collaborates often with Milton Nascimento and others. But rarely has a Brasilian attempted to penetrate the mysteries of his music. So this album is not only a long time coming, but also somewhat of a rarity. Few could have shown – or picked a better place to show – how elemental it is that Brasilian ‘saudade’ can be a part of “Ana Maria”, for instance, Or how “Footprints” can be reminiscent of Ipanema a heightened feeling with the airy vocals of Zé Renato. And on and on it goes, song, after song through every piece.

But make no mistake; while this is Antonio Adolfo’s masterpiece (another in his long line of masterpieces actually) and it may just be his finest to date, he is, by no means the only one who shines on the recording. Marcelo Martins acquits himself with flying and vivid colours. Trumpeter Jessé Sadoc and Serginho Trombone are hypnotic through their performances as are guitarists Lula Galvão and Claudio Spiewak (who also mixed Roger Freret’s phenomenal recording). And expectedly, bassist Jorge Helder, drummer and percussionist Rafael Barata together with André Siqueira play with fine-spun brilliance as well. Wayne Shorter has received many glowing tributes, but you’ll be hard-pressed to find one that sparkles more gem-like than this priceless one by Antonio Adolfo.