An Evening with Jane Bunnett and Maqueque in Toronto 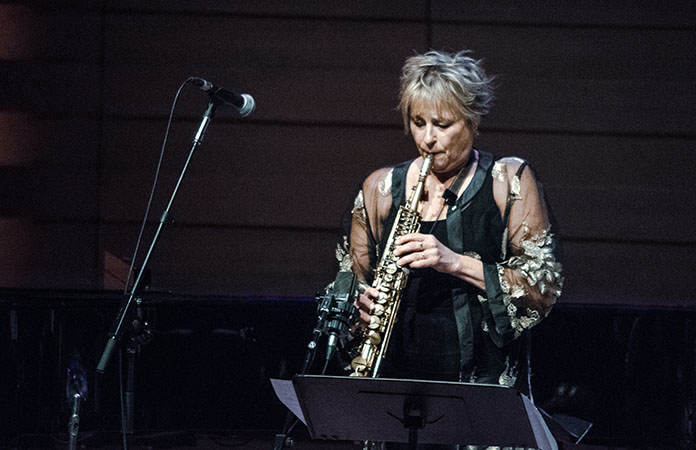 Canadians don’t always get a fair shake when it comes to their contributions to the art of music – especially Jazz music. The list of honorees even among peers and especially among aficionados is a short one; Oscar Peterson, Gil Evans, Oliver Jones, Don Thompson, Paul Bley, Joni Mitchell, Kenny Wheeler, Charlie Biddle, Moe Koffman, Peter Appleyard, Diana Krall and, well… Meanwhile, younger musicians often melt into the American Jazz scene as they begin to find that it “pays” more for their services. So spare a thought for Jane Bunnett, a musician celebrated in Canada whose successes, and those of her trumpet-playing husband and musical co-conspirator Larry Cramer, have always been relatively glossed over except among those who take music seriously.

You could make the excuse that she’s probably still paying her proverbial dues. In reality, however, Miss Bunnett has done all of that a very long time ago. She was one of the first musicians to explore Cuba and its music; a deep dive from which she and Mr Cramer surfaced having mastered the various nuanced idioms and metaphors, adapting them to grace her own voice which has emerged today as one of the most unique ones in contemporary music. As a result no one playing Jazz today is immersed more completely in the explosive vortex where the music of Jazz and the Afro-Caribbean idioms collide than Miss Bunnett. In point of fact, of non-Cuban musicians perhaps only Dizzy Gillespie may have done more to spread the gospel according to the Lucumi into the realm of Jazz.

But in her latest incarnation Miss Bunnett has raised the bar even higher – practically heavenward – in such a manner that one wonders if this is not her greatest musical epiphany. During (or around) 2013-14, Miss Bunnett and her husband and now turned producer Larry Cramer created an all-girl Cuban ensemble named Maqueque. Success was slow at first, but their eponymously entitled 2014 album won the Juno Award for Best Jazz Album in 2015. This was followed up by the Grammy-nominated Oddara (Linus Entertainment, 2016). As the group’s personnel changed slightly since its formation five years ago so also did an important aspect of their music.

From being one which was held together with music composed largely by Miss Bunnett (coupled by standards and a few originals by co-founder and lead vocalist Daymé Arocena, the “new” Maqueque has bloomed into a full co-operative – at least in the composition department – with contributions from all of its fully-blooded members. But more than anything else the music of the girls has bloomed into something wholly unfettered; driven by maqueque, a word that connotes “the spirit of a young girl” and a name that was given them by Miss Arocena’s grandmother, a practitioner of Santeria, the ancient Afro-Cuban religion derived from Catholicism inherited from their historical colonisers, the Spaniards.

The “Spirit” was alive and in full flow, through the crisp warmth of Koerner Hall on November 30, 2018, propelled into the rafters by the hollow thunderclap of the Batá drums as Maqueque launched into an ultra-puckish version of “Little Feet”, all to the glorification of the deified Changó, (“The Great Spirit” with its ceremonious thunder and lightning, all through the slender, yet powerful hands of percussion colourist Mary Paz. A few bars in, of course, the other members of this magical ensemble joined in, including pianist Dánae Olano, vocalists Daymé Arocena and Melvis Santa (who doubled on chekere), together with the celebrated Yissy Garcia on drums and newly anointed bassist Tailin Marrero.

The combusting harmonic and rhythmic provides the spark for Miss Bunnett’s soprano saxophone which begins floating over the melody causing the rest of the musicians to join in the festivities and all of this music soon rolls over into the group’s anthem, “Maqueque”, which set the high bar for their debut album of the same name. Every one of the musicians lends a unique voice to the volcanic mix of music and this becomes eminently feverish through the next song “Dream”. Having wound the audience up to feel the heat the “heart-music” of Maqueque breaks through with Bill Withers’ classic “Ain’t No Sunshine”; an achingly beautiful version that highlights the special quality of Arocena’s soulful voice which is impelled by wordless harmonics from Miss Santa’s.

My moon app announces that in 14 hours the Supermoon of May will be here. During a full moon I...
Promotion