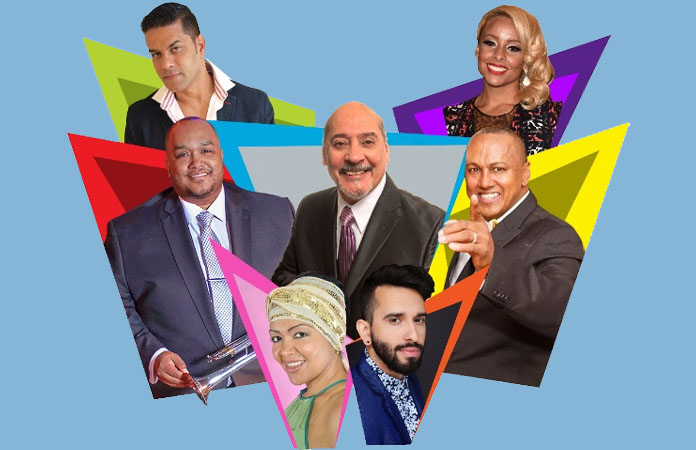 April 2018 (Bronx, NY) – By popular demand, the Hostos Center for the Arts & Culture brings back its “Mambo Memories” concert, a tribute to the Palladium Ballroom era of the 1950s with a performance featuring a wide array of singers and dancers on Saturday, April 21st, 7:30 PM in the Main Theater at the Hostos Center, Hostos Community College, 450 Grand Concourse, in the Bronx.  A dance follows at 9:30 PM in the Hostos Café with Salsa Warrior DJ Roy spinning mambo favorites.

Although the Mambo (“conversation with the gods” in Kongan) originated in Cuba in the 1930s, the art form enjoyed its greatest popularity and its own unique styling in both music and dance at the Palladium Ballroom in New York in the 1950s.  Although many artists were featured at the Manhattan club, they were dominated by “the big three”— the bands of Tito Puente, Tito Rodríguez and Machito.  Puente’s band featured the Cuban singer La Lupe in the last years of the Palladium and Machito featured Graciela (Pérez) many times during the 18-year run of the club which closed in 1966.  “Mambo Memories 2” will feature music of the “big three” as well as songs of La Lupe and Graciela.

Tickets for “Mambo Memories 2” are $25 and $35, with $5 tickets for students and are available at www.hostoscenter.org or by calling (718) 518-4455. Tickets for the after-concert dance, for concert ticket holders only, are $10. Box office window hours are Monday through Friday, 1:00 p.m. to 4:00 p.m., and two hours prior to performance. Support for Hostos Center programs is provided by the Eugenio María de Hostos Community College Foundation, with public funds from the New York City Department of Cultural Affair

The Steven Oquendo Mambo Orchestra was founded in 2009 by renowned Bronx educator Steven Oquendo, who as a trumpeter has toured the world with the late Celia Cruz, Destiny’s Child, Wynton Marsalis, Eddie Palmieri and others. The band performs weekly at Mamajuana’s Café in the Bronx in addition to performances throughout the New York area.  Its members have individually performed with a wide array of artists such as Ray Santos, Tito Puente, Celia Cruz, Machito, Tito Rodríguez, Hector Lavoe, Benny Golson, Jon Faddis, Marc Anthony, Dave Valentín, Arturo Sandoval, Juan Luis Guerra, and a host of others.

Ray de La Paz was born in Spanish Harlem and raised in the Bronx. His first professional experience was singing with El Conjunto de Don Juan at the Colgate Gardens in 1970.  He later recorded and performed with El Conjunto Melao, which is where the late great conguero Ray Barretto discovered him and invited him to join his band which resulted in four albums. In 1976, Ray joined the bandleader and percussionist Louie Ramirez, which ultimately led to a equal partnership that produced many gold records including “Con Chache.” Ray’s first solo album “Esta Como Nunca” was released in 1987. After several more albums, he made his acting debut in Paul Simon’s “The Capeman” on Broadway in 1997. In 2002, he recorded and toured with the Spanish Harlem Orchestra, and is featured on the Platinum-selling recording “Un Gran Dia en el Barrio” as well as other recordings by the group.

Singer Frankie Morales was raised in “El Barrio,” attended Boys and Girls Harbor School to study voice and percussion, and at the age of 14 was singing back up for Joe Bataan. Over the next few years, he would sing backup and coros for artists such as Hector Lavoe, Ismael Rivera, Ismael Miranda, Celia Cruz, Pellin Rodriguez, and Cheo Feliciano.  He became the lead singer for the Lebron Brothers and recorded two albums as a solo artist — “Frankie Morales: En Su Punto” and “Standing Out,” which led to appearances with the Fania All Stars and Tito Nieves, and ultimately to his role as lead singer with Tito Puente.  With Puente, Morales recorded several albums including “Mambo Birdland” and “Masterpiece,” Puente’s final album and collaboration with Eddie Palmieri, which both won Grammy Awards.

Luisito Rosario was born and raised in New Jersey. Being of Puerto Rican descent, he has always appreciated his Latin roots. His early love of Salsa propelled him to be a singer.  In 1996, the legendary Larry Harlow from the Fania All-Stars hired Luisito to be lead vocalist for his orchestra and he still continues in that role.  In 2001, Luisito teamed up with Mambo City Music LTD and launched his first solo CD, “Jurame,” showcasing all that he had learned from Harlow and Los Hermanos Moreno.  In 2017, he released “Si Me Amaras” which includes romantic salsa as well as hot danceable tracks always focusing on his roots to the classic salsa sounds of the 70s.  In 2018, he has teamed up with flutist Andy Harlow for a remake of Tite Curet Alonso’s “El Primer Montuno,” which was a major hit in the 70s.

María Fernandez, Nayibe “La Gitana” was born in Cali, Colombia. From an early age, Nayibe loved to sing all the old Cuban sones, rumbas and boleros, especially those of her mother’s favorite artist, Celia Cruz, as well as the songs of Celina Rautilio “La India del Oriente” and La Lupe. At age 18, Nayibe performed with the Mexican group La Sonora Latina and the Salvadorian group La Banda Ardiente. She was discovered by Henry Montalvo, a recognized music producer and promoter from Tropical Buddha Records which led to the recording of her two CDs with Julio and Ray Castro of Conjunto Clásico.  Now a resident of the Bronx, she sings all over the City including Lehman Center and clubs such as Mamajuana’s Café, The Iguana, and other venues.

Miss YaYa (Yahaira Antonia Vargas) is a Dominican / Puerto Rican singer who made her 2005 television debut on Univision’s competition segment, “Gigantes Del Manana,” on the Sabado Gigante show. She was one of 26 contestants who beat out thousands in the nationwide search for the next Latin solo artist. She competed in another nationwide search for P.Diddy’s “Making The Band 3.” In 2007, Miss YaYa became the centerpiece of the revived DLG (Dark Latin Groove) Salsa band, under the guidance of masterful producer Sergio George, who has produced for stars such as Marc Anthony, India, Frankie Negron and Victor Manuelle among others. Aside from her accomplishments in front of the audiences and stage lights, Vargas holds a Bachelor’s degree in broadcast journalism from the City College of New York.

At the young age of 17, Jeremy Bosch received a full scholarship to attend the Berklee College of Music.   It was during these formative years that Bosch had his first professional experience as an artist, playing alongside Puerto Rican percussion legend Giovanni Hidalgo and his All Star Band. Since that time, he has performed concerts and at festivals in Europe, South America, North America and the Caribbean. Most recently, Bosch had the honor of performing as a band leader at the European Parliament in Brussels, Belgium. He also performed alongside Grammy Award winner Sergio George and the Salsa Giants in New York City’s Madison Square Garden. He is currently the lead singer and flutist with the Spanish Harlem Orchestra and appears frequently with Eddie Palmieri, Steven Qquendo, the Mambo Legends, and other groups.

About the Hostos Center for the Arts & Culture

Founded in 1982, The Hostos Center for the Arts and Culture, based at Hostos Community College of the City University of New York, serves the cultural needs of residents of the South Bronx and similar inner-city communities who do not have the means or inclination to attend arts events in mid-town Manhattan. The Center, which includes a 900-seat theater, a 367-seat theater, and museum-grade art gallery, creates forums in which the cultural heritages of its audiences are affirmed and nurtured. The Center’s programming consists of a performing arts presenting series; a visual arts exhibiting series; periodic festivals promoting cultural traditions, especially Afro-Caribbean; The Hostos Repertory Company; and an individual artists’ program with commissions and residencies.  Nearly 60,000 partake in the Center’s programs each year.

Eugenio María de Hostos Community College is an educational agent for change that has been transforming and improving the quality of life in the South Bronx and neighboring communities for nearly half a century. Since 1968, Hostos has been a gateway to intellectual growth and socioeconomic mobility, as well as a point of departure for lifelong learning, success in professional careers, and transfer to advanced higher education programs. Hostos offers 27 associate degree programs and two certificate programs that facilitate easy transfer to The City University of New York’s (CUNY) four-year colleges or baccalaureate studies at other institutions. The College has an award-winning Division of Continuing Education & Workforce Development that offers professional development courses and certificate-bearing workforce training programs. Hostos is part of CUNY, the nation’s leading urban public university, which serves more than 500,000 students at 24 colleges.