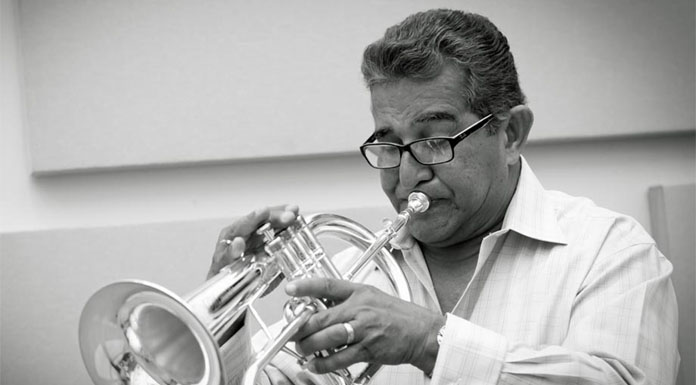 “Hasta Siempre” is a celebration of Luis “Perico” Ortiz 55th Anniversary of his unbelievable music career that made him a legendary musician, educator, producer, arranger and composer in the world of salsa and is also responsible for the success of dozens of artists, including his very own success of 40 years as soloist. Luis Perico Ortiz takes us on a journey that celebrates his musical collaboration with great artists such as Rubén Blades, Celia Cruz, Tito Puente, Tito Rodriguez, Machito, Mongo Santamaría, plus a section of salsa dura with some special guests such as: Roberto Lugo, Domingo Quiñones and Johnny Kenton.

Luis Ortiz a.k.a. “Perico”(born December 26, 1949) is a trumpet player, composer, musical arranger and producer. Ortiz was born in San Juan, Puerto Rico, the capital city of the island and raised in Santurce, a sector of San Juan. His family’s love of music had influenced him before he was old enough to attend school. When his parents realized that their child was interested in music, they enrolled him in the la Escuela Libre de Música Puerto Rico, a school that specializes in music. From there he went on to study at the Conservatory of Music of Puerto Rico.

After he graduated from the Conservatory, Ortiz enrolled and attended the University of Puerto Rico to continue his musical education and where he would eventually earn his bachelor’s degree. In 1967, at the age of eighteen, Ortiz participated as a guest soloist with the Puerto Rican Symphony Orchestra conducted by Pablo Casals.

In 1971, Ortiz formed his band and won the “Diplo” award in Puerto Rico for “The Best Trumpet Player of the Year.” He was also awarded four Latin New York Magazine Trophies, “Best Trumpet Player of the Year,” “Arranger of the Year,” “Best Orchestra of the Year” and “Musician of the Year.” In 1981, he was awarded an “ACE” Award for “Best Interpreter of Salsa Music” and another “ACE” award in 1982 for the “Best New York Orchestra.” In 1987, Ortiz and his band set out on a world tour which included the following places: United States, Puerto Rico, South America, Central America and Europe.

In 1988, Ortiz founded his first company, Dialen Promotions, Inc. The company offers advertising, sound engineering, production, and arrangement services in its studios for radio and television “jingles.” Among his clients are Smirnoff, McDonald’s, Kodak, John Casablancas, Polaroid, and HBO.

In 1993, Ortiz founded in Puerto Rico another company, Luis “Perico” Ortiz Productions, Inc. His new clients include Walt Disney Company and Quincy Jones. During the decade of the 1990s, Ortiz traveled with his band and performed in Aruba, Colombia, and Japan. He also performed in Puerto Rico, alongside Lucecita Benítez and Tommy Olivencia, at the Luis A. Ferré Center for the Performing Arts in San Juan. Ortiz directed and produced a recording for Japanese singer Yoshihito Fukumoto member of the band Sweet Basil, Inc.

In 2002, Ortiz won a “TU Musica” Award for the “Best Christmas Production, ” and in 2004 he produced the first ever salsa gospel album. Luis “Perico” Ortiz currently continues to produce music and soundtracks. He is also a professor at the Music Conservatory of Puerto Rico where he teaches Jazz Performance and Caribbean Music.