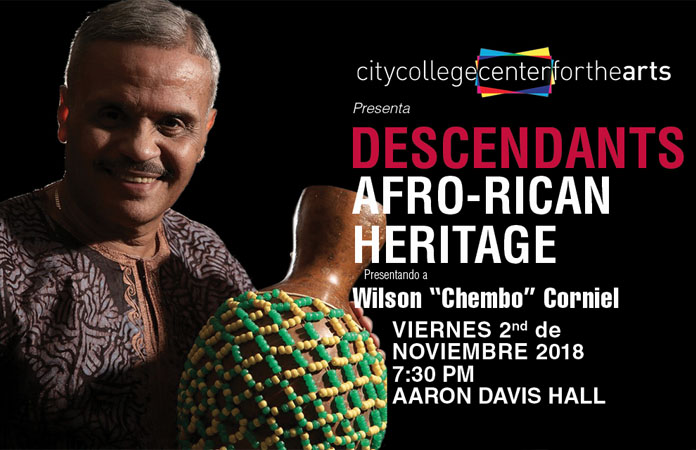 From the Mainland to the Homeland to New bands, Grammy Nominated Artists “Chembo” Corniel & William Cepeda Introduce a Double Dose of Culture.

WHO/WHAT: The thunderous power of drum beats and dance steps centuries old will resound throughout the newly renovated halls of the City College Center for the Arts connecting the Harlem community to a diverse display of African derived Puerto Rican music from the roots of its ancestors.

Master percussionist and Grammy Award nominee Wilson “Chembo” Corniel mixes Latin with jazz and Boricua bomba beats and patterns as his quintet is joined by folkloric scion and Grammy nominated trombonist, William Cepeda for an evening of homage to the Island’s descendants. Topped by a collective of young bloods of the Afro-Rican Bronx “Bomba” Collective, Nelson Matthew Gonzalez and his Redobles de Cultura connect the past with the future in this not to be missed musically creative celebration of Island descendants. 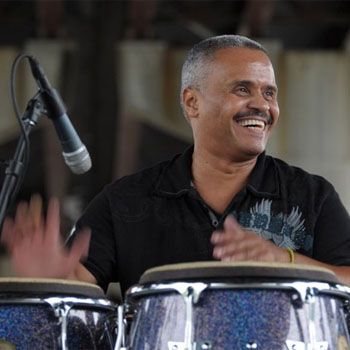 His drums have taken Wilson “Chembo” Corniel, Jr. from the streets of his native Red Hook in Brooklyn to around the world alongside artists the likes of Tito Puente, Blood, Sweat & Tears, and Grady Tate to name just a few. A mild-mannered, soft-spoken, humble soul his giant sound is considered among the most versatile and hart-hitting of percussionists. After studying in both East Harlem and Cuba, Chembo instructs students at SUNY Purchase Conservatory of Music, has an instructional DVD, “An Introduction to Hand Percussion: Volume I – Congas,” and is endorsed by Latin Percussion instruments, Remo drum heads, Vic Firth Sticks and Sabian cymbals. He’s toured the world and his music can be heard over the “Cosby Show” and Nickelodeon’s hit children’s show, “Dora the Explorer.” His 2009 CD, “Things I Wanted To Do,” received a Grammy nomination for Best Latin Jazz Album described as “A sprinkling of be-bop, a touch of swing with a dollop of bomba, rumba, tango and danzón topped with ‘un chin’ de charanga.” His latest 2016 recording is “Land Of The Descendants” with invited guests Kat Gang (vocals) and James Zollar (trumpet). 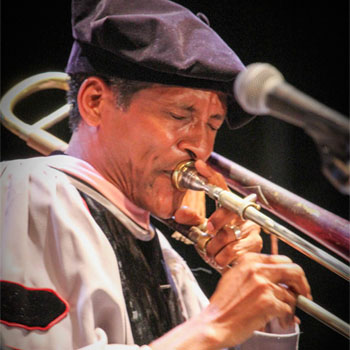 Trombonist, arranger, and composer William Cepeda is a scion of Puerto Rico’s premier and world-renowned cultural gate-keepers of the Islands Afro-Boricua roots music, the Cepeda family considered an institution providing dance and drum workshops alongside rousing performances and presentations. Cepeda’s own Afro-Rican Jazz Group revolutionized Latin music in 1992 with an innovative blend of world music, progressive jazz and traditional Boricua roots fused with classical compositions. He’s traveled worldwide performing alongside Dizzy Gillespie, Miriam Makeba, Tito Puente and Paquito D’Rivera. He’s served as both composer and artist-in-residence at a number of distinguished institutions and was bestowed an Honorary Doctorate from Berklee College of Music in 2013.

The concert opens with a double dose of culture from young Bronx torch-bearers of this Boricua roots music from enslaved Africans that provided both solace, healing and resistance on the Island. Redobles de Cultura (RDCNYC) is a collective of top New York City-based Afro-Puerto Rican Bomba practitioners: Julia Gutie?rrez-Rivera, Nicky “Caja Dura” Laboy, Nelson Matthew González and Nina Rodriguez are the proud members of today’s generation of bomberos, cultural artists and educators. An amalgamation of several notable bomba and plena ensembles including Los Pleneros de la 21 and more, each member was weaned on the cultural and traditional practices of Puerto Rico and other Afro-Caribbean genres from a very early age. This first generation “DiaspoRicans” proudly continues the work of their parents and ancestors to celebrate and transmit the richness of the Afro-Caribbean and Afro-Boricua expressions with communities worldwide.

The City College Center for the Arts (CCCA) presents the Descendants, Afro-Rican Heritage concert and serves as a cultural hub that builds a sense of community both within the school and its surrounding neighborhood, while inspiring creativity and diversity. It also manages Aaron Davis Hall, a premier venue for local and national performers and art patrons in the tri-state area.  North of Lincoln Center, Aaron Davis Hall is the largest performing arts center in Manhattan featuring two theaters and a studio complex and performances that are multicultural in focus, including classical, jazz and Latin music, dance, theater, literary readings, film, performance art and art exhibitions. For more information please visit the website at: www.citycollegecenterforthearts.org