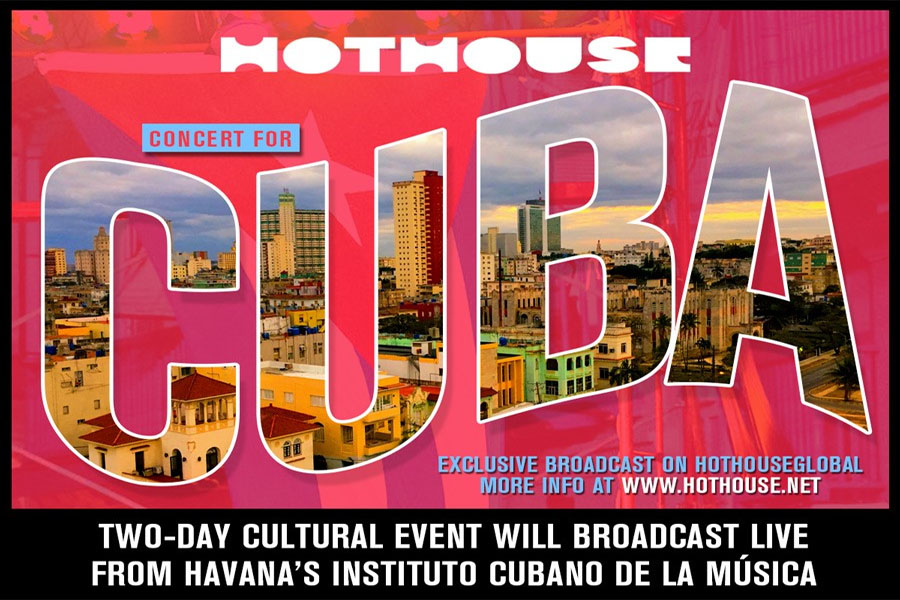 Renown Musicians, Artists to Unite in the World’s First “Concert for Cuba” – Global Broadcast on July 18 & 19 Brings Afro-Cuban Music and Culture to the World

Joining the musicians in honoring the humanitarian role Cuba played during the pandemic, during which it sent medical teams and supplies to nearly 30 nations, will be an equally impressive group of artists and performers, including, to date, Ed Asner, Alfredo Caxaj, Danny Glover, Mike Farrell, Juan De Marcos González, Michael Moore, Ron Pearlman, Aislinn Sol, and David Soul – all of whom are known for their decades-long activism in defense of human dignity and rights.  And complementing the musicians and artists will be a number of well-known political activists and leaders including Medea Benjamin, Councilman Mike Bonin, Jontay Darko, James Early, Antonio Gonzales, Alicia Jrapko, Judith Le Blanc, and Congresswoman Barbara Lee (CA-13TH District).  Additional performers and speakers will continue to be added to the event.

Marguerite Horberg, whose Chicago cultural-mecca HotHouse, developed HotHouseGlobal as an online streaming initiative to serve the NGO, small business, and cultural industries adversely affected during this health and economic crisis, and a sponsor of the two-night event speaks of the uniqueness and importance of the moment.  “Not only is this an amazing gathering of talent – it is an important affirmation of hope.  If we’ve learned nothing else these last months, we’ve learned how connected we all are. In the same spirit that Cuba, one of the world’s smallest nations, sent medical teams to more than 26 nations during the pandemic, this concert too is meant to underscore that interconnectedness.  It is as it states, “A time to heal.”

“A Concert for  Cuba” is sponsored by: the Instituto Cubano de la Música/The Cuban Institute of Music; HotHouse (Chicago, IL); Raul Cuza (Montreal, Canada); and Bill Martinez (San Francisco, CA).  The concert will contain both live and pre-recorded sections and be broadcast at 7pm CST/8pm EST/6pm PST on both July 18th and 19th from Havana’s Instituto Cubano.

The concert is free and will be available through a variety of channels, both within and outside of Cuba.  To Europe, the Americas, Asia, and Africa the broadcast will be available through the the Twitch.tv/HotHouseGlobal channel as well as through HothouseGlobal’s Facebook Site.  While there is no charge, advance registration is recommended.  Register here for the “Concert for Cuba” Eventbrite site to ensure notice of any schedule or broadcast changes.

Despite being the one of the hemisphere’s smallest nations, with its resources constrained by   continued U.S. policies, Cuba is sharing its medical advances and teams of health care experts and first responders to assist more than two dozen nations across the globe.  In recognition of their profound contributions, many of the island nation’s legendary musicians will be joined by a score of international stars for the two-night event. 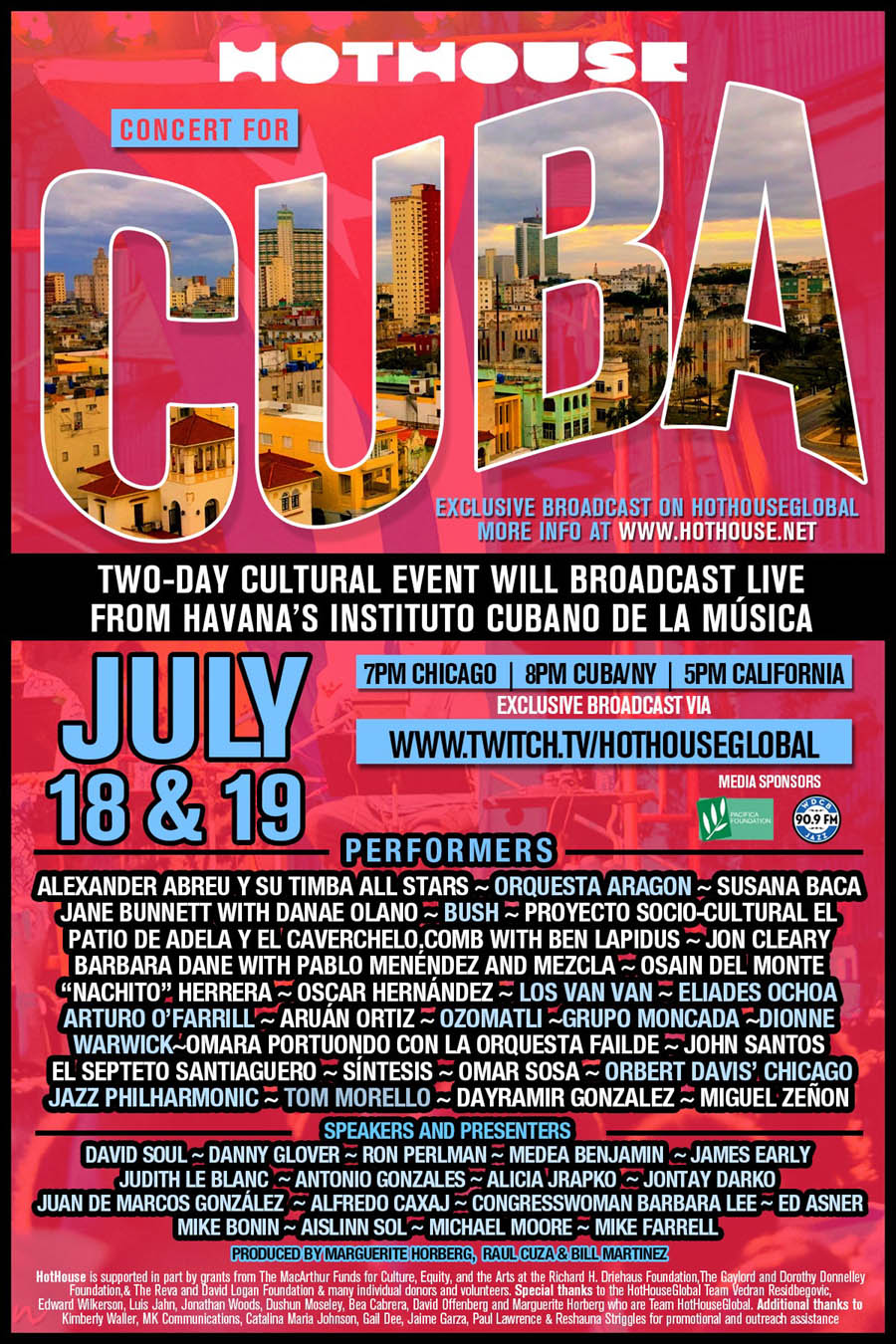 El Instituto Cubano de la Música (ICM) / The Cuban Institute of Music
The Cuban Institute of Music (ICM) is a department within the Ministry of Culture of Cuba and is one of the most important cultural institutions of the country. It is tasked with the implementation of the policy of development, promotion, and projection of music inside and outside the island. It has a system of subordinate institutions, which house more than 16,000 artists throughout the country. Today it is the governing institution of the Music Development Programs, whose ultimate objective is to achieve a stronger affinity with culture in the Cuban people, applying a strategy aimed at stimulating, developing and implementing actions supporting musical institutions throughout the country. ICM produces a variety of shows in the country that ensure the development, protection, enrichment, defense, and promotion of the musical heritage of the nation.

Marguerite Horberg and the Center for International Performance and Exhibition dba HotHouse
A nonprofit, arts presenting organization formed in 1987 in Chicago, IL HotHouse has been long the city’s principal venue for presentation of contemporary and traditional performance and art from throughout the African diaspora. HotHouse was one of a handful in the entire country to host Cuban artists during the years of the U.S. blockade from groups like Irakere to artists such as Chucho Valdez.  In 2017, HotHouse was one of twelve organizations in the U.S. to receive a U.S. State Department grant via the Embassy in Havana to create the Chicago-Guantanamo Blues Exchange.  In March, HotHouse developed an online streaming initiative to serve the NGO, small business, and cultural industries adversely affected during this health and economic crisis. The HotHouseGlobal Twitch channel facilitates a variety of multi-arts and community-based content and a worldwide network in the social justice and cultural sector. Since March more than 14,000 people have tuned in to HotHouseGlobal.

Raul Cuza
Raul is the principal at Cuza Talent Agency, a company based in Montreal, Canada specializing in World Music, with a very strong knowledge in Latin and African music. Mr. Cuza has been active in this music field for more than 20 years and has served as Programming Director of Festival Nuits d Afrique, co-owner of Eye For Talent Canada, President of Mango Music, and Vice President of GEM Latina.  He has been responsible for the tour of artists like: Septeto Santiaguero, Adalberto Alvarez, Amparanoia, Azucar Negra, Los de Abajo, Paris Combo, Seckou Keita, Sierra Maestra, Qbanito, Orquesta Sensación.

Bill Martinez
Bill is an immigration attorney who has also produced and managed cultural events in the San Francisco Bay Area since 1973. A native San Franciscan, he is a graduate the University of San Francisco and Hastings College of the Law.  He has worked in the Community Law Collective (’74-’79), New College of California School of Law (’79-’83) and the Volunteer Legal Services Program of the Bar Association of San Francisco (’84-’93).  In 1981, he co-founded the Encuentro del Canto Popular, a San Francisco-based Latin American music festival. His work with the Encuentro lead him to become one of the nation’s leading experts in U.S.- Cuba cultural exchanges and artists’ visas. He co-founded the Latino Entertainment Partners which produced historically significant concerts of Cuban artists.