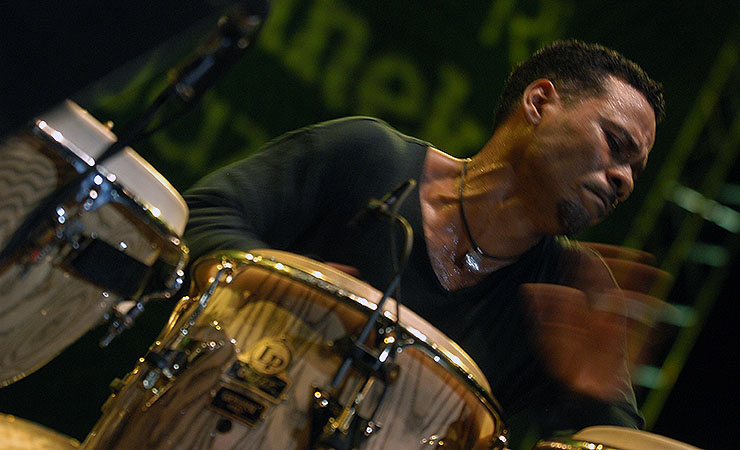 Latin Grammy nominee Paoli Mejias is a distinguished master percussionist from Puerto Rico, ranked among the best in both Latin jazz and salsa. As a bandleader Paoli fuses straight-ahead jazz with African, Mediterranean & Caribbean folkloric rhythms to create a new dimension of Latin jazz that is global, energetic, and modern.

Performing for more than 25 years, Grammy nominee Paoli Mejias has already distinguished himself as a young master percussionist and is ranked among the best in both salsa and Latin jazz. Paoli is now at the vanguard of Latin jazz as leader of his own Quintet, having produced a live performance released on Blu-ray “DE JAZZAMBIA A MI TAMBOR EL CONCIERTO” (2011) and three successful CDs as band leader: “JAZZAMBIA“(2008), “Transcend” (2006) and “Mi Tambor” (2004) which received a Grammy Award nomination for Best Latin Jazz Album.

Born March 7, 1970 in Rio Piedras, Puerto Rico, percussionist Paoli Mejias’ rise to Latin jazz fame is a story of sweat and dedication. Completely self taught, Paoli purchased his first set of congas at age twelve, inspired by records of conga great Carlos “Patato” Valdés and Latin jazz innovators Batacumbele and Irakere. Learning by imitating the sounds he heard on the records, Paoli taught himself the language of the congas without the benefit of an instructor. By his mid-to-late teens, he could be found at jam sessions in the streets and on the beaches of San Juan. He earned invitations from bandleaders like Rafú Warner, José Nogueras, Glen Monroig and Charlie Sepúlveda. As he worked his way up the live music food chain in Puerto Rico, Paoli found himself performing alongside the Latin jazz legends who had inspired him in his early years.

Paoli made his successful debut as a bandleader in 2004 with his self-produced record “Mi Tambor” which received a Latin Grammy nomination for Best Latin Jazz Album in 2005. Showered with positive press and accolades from the worldwide jazz community, Paoli’s transition from sideman to focal point was explosive. His 2006 follow-up release “Transcend”  features some of the New York Latin jazz scene’s finest: Miguel Zenón, Antonio Sánchez, Luis Perdomo, Jaleel Shaw, Hans Glawischnig, & Tony Escapa, all of whom also recorded on his 3rd CD “JAZZAMBIA” released in 2008.

Consistently, each and every review acclaims his ability to fill a venue with his charisma and energetic Afro-Caribbean rhythms bringing the public to their feet.  Complimented by the best jazz musicians, Paoli’s Quintet is creating a new style of Latin Jazz that goes above and beyond the genre in the traditional sense, incorporating unexpected elements of Asian, Greek, Flamenco, and African influences. The result is intriguing and exhilarating; the public becomes enveloped in the tight ensemble’s passion for music that is a delight to hear, and remarkable to witness in a live setting.

An experienced educator and clinician, Paoli is Resident Artist at the Conservatorio de Musica de Puerto Rico since January 2010, and at Cornish College of the Arts in Seattle Washington since 2012.  Paoli has given master classes at the Montreal Percussion Festival, the University of Washington, University of New Mexico, Cal State University, “El Batey” Puerto Rican Cultural Center of Chicago, and the World Percussion Festival in Seattle among others;  Paoli was also named an honorary member of FITA (Festival Internacional de Tradiciones AfroAmericanas) in Venezuela.

His latest project “PAOLI MEJIAS DE JAZZAMBIA A MI TAMBOR EL CONCIERTO” released on Blu-ray in the fall of 2011, is a concert of Paoli performing with the best musicians in Puerto Rico many songs from his 3 CDs, and new songs he has written. This live recording is a captivating musical journey of Paoli’s evolution as musician, bandleader, and composer. Paoli documents a historical moment in Latin jazz, celebrating the diversity of his Puerto Rican heritage and showcasing the rich talent of the new generation of musicians in Puerto Rico.

In September of 2013 Paoli received the honor of being invited by Carlos Santana to join the legendary Santana band.  While not touring with Santana, Paoli is planning his next recording project for 2014. Paoli endorses Latin Percussion (congas & percussion), Sabian (cymbals), Remo (drum heads), Vater (drum sticks), and Hansenfutz (practice pedal).