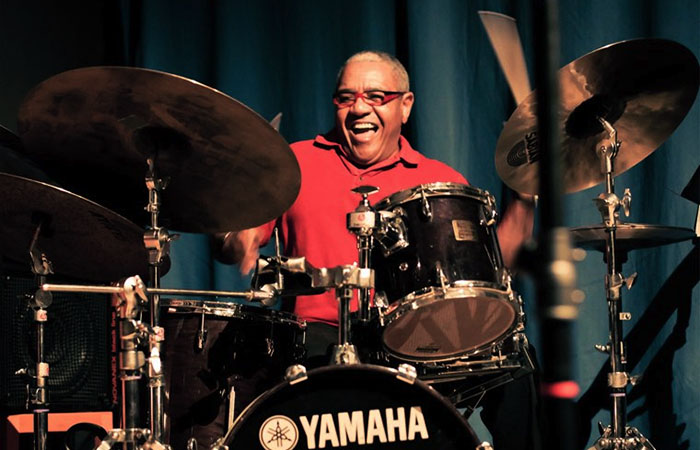 Ignacio Berroa has been recognized by many as one of the greatest drummers of our times. His numerous contributions to the American music scene have earned him a place among a selected group of artists known to have set new musical trends for the 20th century.

Jazz Legend Dizzy Gillespie best defined Ignacio as: “… the only Latin drummer in the world in the history of American music that intimately knows both worlds: his native Afro Cuban music as well as Jazz…”

Highly respected among his peers, Ignacio’s musicianship and versatility has enabled him to build a successful career by gaining the recognition of some of the most important artists in the business.

Ignacio Berroa was born in Havana Cuba on July 8 1953. He began his musical education at age 11 at the National School of Arts and subsequently at Havana’s National Conservatory, beginning his professional career in 1970. By 1975 Ignacio had become Cuba’s most sought after drummer. He left Cuba during the Mariel Boatlift, then moved to New York in June 1980 were he started working with musicians such as Chico O’Farrill and Mario Bauzá who recommended him to Dizzy Gillespie. In August 1981 Dizzy Gillespie invited Ignacio to join his quartet.

As an author he made his mark with the release of the instructional video: Mastering the Art of Afro – Cuban Drumming under Warner Bros Publications, and two books: Groovin’ in Clave & A New Way of Groovin’ under PlayinTime productions.

His first album as a leader, “Codes”, released under Blue Note Records, was nominated for a Grammy in 2007. “Codes” also won a Danish Music Award in 2007 as best International Jazz Album. He was honored by inclusion in the 2011 Modern Drummer Magazine and Blue Note Records Mp3 entitled “Jazz Drumming Legends”. Ignacio received a Lifetime Achievement Award from The Montreal Jazz Festival in 2011.

What the Pros are saying:

“Ignacio is one of the greatest drummers of our time. It is a shame that a lot of American drummers don’t know him. American drummers like to go after names, but sometimes the people you don’t know are the ones you should know. What better teacher can you go to for Jazz and Afro-Cuban rhythms than Ignacio…”  – Dennis Chambers

“Ignacio Berroa is an all American 100 Afro-Cuban drumming maestro, completely fluent and conversant in all styles of music. He is a gift to our music.”  – Peter Erskine

“Ignacio plays with intelligence, taste, fire, and soul. His playing combines the finest aspects of Afro-Cuban and American styles of drumming (…) When you hear him play it just makes you feel good, just like a good hot bowl of gumbo!”  – Wynton Marsalis