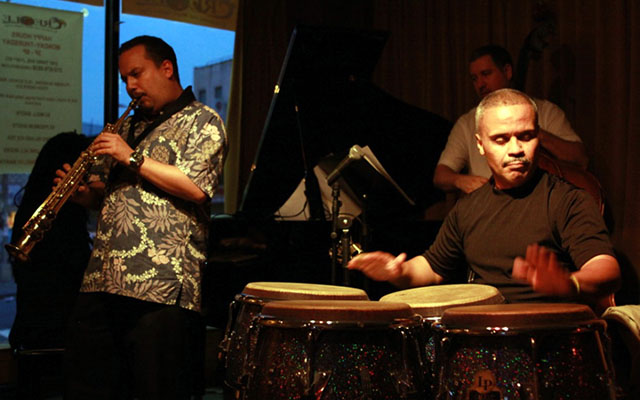 If ever there was a musician that has paid his dues and quite possibly cried the blues it would be Conga master and all around percussionist Wilson “Chembo” Corniel. From his humble beginning in Red Hook, Brooklyn in the 1970’s and on he was blessed to be mentored by some of the legends of percussion such as; Tommy López, Little Ray Romero, and Cachete Maldonado among others. Along the way he studied at the Harbor Conservatory for the Performing Arts in New York and in Cuba at Escuela Nacional de Arte. The director of the “Escuela” at the time was none other than the great pianist, Chucho Valdés of “Irakere” fame and and for Chembo a major influence. Chembo is first and foremost a product of the New York Latin “Cuchifrito circuit”, the equivalent of the Jazz and Soul music “Chitlin circuit”. Either circuit was grueling often doing a “Double” or a “Triple” gig in one day! Honing his craft along side the creme-de la-creme in Jazz, Latin and Latin Jazz. Chembo has played and or collaborated with such luminaries as; Tito Puente, Machito, Louie Ramirez, Chucho Valdés, Grady Tate, Chico Freeman, and Larry Harlow’s Latin Legends band. The latter Chembo currently still tours with, this my friends is just a snippet of Chembo Corniel’s resume. I recall a performance in the late seventies or the early eighties at the now defunct “Corso” nightclub on 86th st and Lexington and there was Chembo holding that solid “Tumbao” and driving the Bobby Rodriguez y la Compañía band forward. Now back to the future, now have Chembo Corniel and his “Grupo Chaworo”.

“Chembo Corniel is the consummate contemporary percussionist… whose technique is like adding hot spices to a cold salad and the blend of this group of musicians can make me sing forever.” – Grady Tate, Jazz Vocalist