Created by the composer, musician and arranger Letieres Leite back in 2006, award-winning Orkestra Rumpilezz is an elegant orchestra of 20 percussion and wind instrument players led by Letieres himself. They draw compositions from the universe of Bahia’s African roots under the influence of modern jazz. The group celebrates Afro-Bahian musical roots and its universal branches and gives a modern harmonic outlook to the ancestral music of Bahia by blending Afro-Bahian drumming with American jazz.

Compositions and arrangements are all conceived out of the beats and rhythmic designs of the Universo Percussivo Baiano, Bahia Percussion Universe (UPB) – which is a term coined by Letieres. Their musical influences ranges from the big traditional percussion groups or “Bloco Afros” such as Ilê Aiyê and Olodum, as well as in the sambas of the Bahian recôncavo and the sacred ceremonies of Afro-Brazilian religion Candomblé. Rumpilezz has already played with great musicians along its short history. Gilberto Gil, Lenine and Joshua Redman are a few names amongst them.

In 2011, the Orkestra led two great tours in Brazil and was the only Brazilian participant at the main stage of the acclaimed BMW Jazz Festival, besides being one of the attractions at the Rock in Rio Festival in Rio de Janeiro. In 2011 and 2014, the Orkestra toured in Europe performing in several countries and important festivals including the prestigious Moers Festival in Germany and the Music Meeting Festival in the Netherlands. They were well received by the public and the critics.

Rumpilezz had their North American debut in August 2015 with the Rumpilezz Lodê Tour. Musicians Arturo O’Farrill, Steven Bernstein, and John Santos did accompany them. The concerts were part of the International Jazz Festivals Circuit and included presentations at Lincoln Center in New York City, San Francisco Jazz Festival, San Jose Jazz Festival and the Rhythm Foundation in Miami. In Brazil, the ensemble toured with the concert Rumpilezz Visita Caymmi, which features revisited songs from the repertoire of Bahian composer Dorival Caymmi with brand new arrangements by Letieres.

Paintings, instruments, music. Art has always been the expression motor of Letieres Leite

He was only 13 when he joined the Afro-Brazilian Orchestra of Severino Vieria High School in Salvador. That marked the beginning of his academic activities. Back then, the Orchestra was conducted by the ethnomusicologist Emilia Biancardi. Later he studied at the School of Fine Arts of the Federal University of Bahia (UFBA). In parallel, he taught himself to read and play the flute and sax and in 1986, he joined the Franz Schubert Conservatory in Vienna, Austria.

Born and educated in Bahia, Northern Brazil, Letieres moved to Europe in 1986 where he lived for 10 years and started out as a professional musician. There he played with various musicians in festivals across the continent, including Gil Goldstein in 1990, Paulo Moura at the Montreux Jazz Festival and Jazz Zurich in 1992, and Alfredo de la Fé in the European tour in 1993. He also worked with the Hip-Noses (Herbie Kopf) and Tamanduá, both groups were formed by Brazilians and Europeans.

Unlike many musicians who find success abroad, in 1994 Letieres returned to Salvador and founded the Bahia Music Academy (AMBAH) at the Centre for the Arts Education (Centro de Formação em Artes) in Salvador. Currently, he is the music and educational director of both Rumpilezzinho, a project that develops new young talent, and Rumpilezz de Saia, solely dedicated to the training of instrumentalist women. He also coordinates the Course for the Qualification in Music from the Cultural Foundation of the State of Bahia (FUNCEB).

All the projects that Letieres are involved in aims to establish a system to share knowledge between the musicians, the public, and the educational institutions. They are all grounded in the enhancement and diffusion of Bahian black music history, which is the reason of Letieres’ work and dedication. Orkestra Rumpilezz is the main conveyor of his ideas as a composer, music director and musician. Although he has his roots in Salvador, his branches are flowing over the contemporaneity of the universal creations.

The project created by Letieres is a result from the systematization of his research. It encompasses the UPB methodology to promote the thinking on the progression of music that descends from the Black Diaspora in Bahia. This methodology encourages the dialogue of both the claves system and rhythmic designs of Bahian percussion with other instruments. 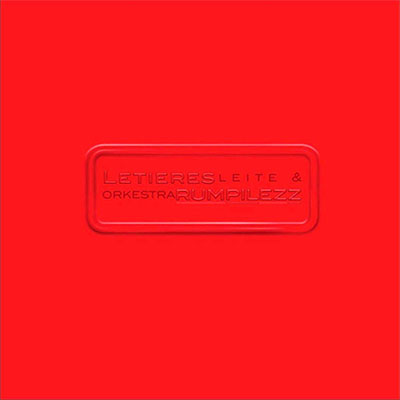 Orkestra Rumpilezz’ acclaimed debut studio album was released in 2009 with mostly positive reviews from the critics. Paulo Cavalcanti from Rolling Stone Magazine granted the album a 4-stars sign whilst Antônio Carlos Miguel from O Globo suggested it was the “inspiration of the year”. Lauro Lisboa Garcia from Estado de São Paulo went beyond and appraised the album as “one of the most brilliant albums of all time”. Pedro Alexandre Sanches from Brazo! Magazine highlighted it as “Bahian avant-garde”.

The group recorded the self-titled album in Castro Alves Theater in Salvador. The album was mixed in the Legacy studio in New York with Grammy winner Joe Ferla as its sound engineer. The record features eight songs authored by Letieres Leite and a revisited Rumpilezz-style Balendoah, a song by the great Brazilian musician Ed Motta. A video clip of a show filmed inside the Church of Nossa Senhora do Rosário dos Pretos in the historic Pelourinho neighbourhood is also available in the media.