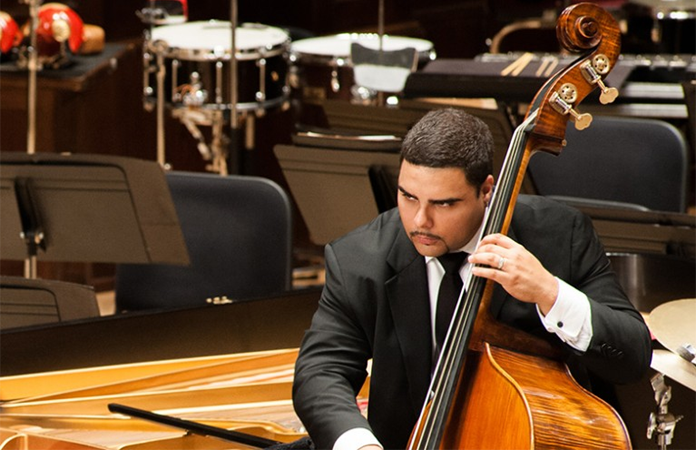 Carlos Henriquez was born in 1979 in the Bronx, New York. He studied music at a young age, played guitar through junior high school and took up the bass while enrolled in The Juilliard School’s Music Advancement Program. He entered LaGuardia High School of Music & Arts and Performing Arts and was involved with the LaGuardia Concert Jazz Ensemble which went on to win first place in Jazz at Lincoln Center’s Essentially Ellington High School Jazz Band Competition and Festival in 1996. In 1998, swiftly after high school, Henriquez joined the Wynton Marsalis Septet and the Jazz at Lincoln Center Orchestra, touring the world and featured on more than 25 albums. Henriquez has performed with artists including Chucho Valdés, Paco De Lucia, Tito Puente, the Marsalis Family, Willie Nelson, Bob Dylan, Stevie Wonder, Lenny Kravitz, Marc Anthony, and many others. He has been a member of the music faculty at Northwestern University School of Music since 2008, and was music director of the Jazz at Lincoln Center Orchestra’s cultural exchange with the Cuban Institute of Music with Chucho Valdés in 2010.

Carlos Henriquez released The Bronx Pyramid on Blue Engine Records in September 2015. Writer Raul da Gama said about Mr. Henriquez’s first album: “There is topographical significance in the musical architecture of Carlos Henriquez’s record, The Bronx Pyramid and it is a bold thesis, one that has gained considerable momentum in recent years. It attempts to create a quadrangular base that stretches from Havana, New Orleans, The Bronx and San Juan with Mother Africa as its apex. While the idea of such a cultural nexus may not be new, Mr. Henriquez has, like a musical architect of considerable talent, created something truly noteworthy. It is music, that is, rooted in a dramatically enriched cultural sod and the bassist’s roots run very deep. Tito Puente (though not the first protagonist) had a great deal ‘to say’ about this in his music when he was alive. And like this illustrious ancestor, Carlos Henriquez has added not just to the conversation, but to the musical language as well.” Read full review.

On Jazz at Lincoln Center Orchestra with Wynton Marsalis: Una Noche con Rubén Blades Carlos Henriquez gets credit for helping Rubén Blades conceive the album, for doing the musical arrangements, performing as a first-class bassist on both, Latin/Afro-Cuban and Jazz musical idioms, and for being musical director on such a special night for the legendary Panamanian singer and songwriter.